MABEL SUEN Coma Coffee Roasters is expanding with a dinner menu in its new two-story cafe.

When Macy Holtzman returned home to St. Louis from living in Chicago, she was greeted with a big request. Not only had her family — who had never been in the hospitality business — decided to open a coffee shop: They wanted her to help run it.

To say she was taken aback is an understatement. As she tells it, she actively tried to talk every single person out of the move. It just seemed so out of left field; growing up, coffee in the Holtzman household was ground grocery-store brand, heavily doctored with cream and sugar, and seen as a way to simply power through the day. As she got older, Holtzman's views remained consistent with that approach, so it seemed funny that she and her family would task themselves with running a place dedicated to the brewed beverage.

However, in some ways, the idea made perfect sense. As owners of the University Tower high-rise in Richmond Heights, Holtzman's family felt the building needed a coffee shop. They had the space to do so on the ground floor, and they felt that Holtzman and her brother Corbin, who each have a background in business, would be the perfect people to make their vision happen. After talking it out — and with a little bit of coaxing — Holtzman relented and took the lead in opening Coma Coffee Roasters five years ago.

It didn't take long for her to realize she had a passion for both coffee and the restaurant business in general. Even before the shop served its first latte, she was opening her eyes to a world of coffee that she didn't know existed, and the better versed she got, the more she wanted to learn. That passion also extended into food service and hospitality in general. In no time, Holtzman found herself doing much more than running a coffee shop; she was passionately giving St. Louisans a superior coffee and food experience.

For nearly five years, Holtzman, who handles the day-to-day operations, and her brother built Coma into a shop and roastery that has become known for some of the city's best coffee, even as the place tends to fly a bit under the radar (at least to those not in the University Tower complex and immediate surrounding area) compared to other top-tier coffee spots around town. Holtzman admits that there was an initial challenge in getting people to understand that Coma is more than an office building coffee shop, and when you drive up, you can see why there would be that impression. The shop sits on the ground floor, just off the lobby, of a sleek, modern high-rise building filled with attorneys and medical offices. It wouldn't be out of the ordinary in downtown Chicago, but without the foot traffic of a big city business district, you have to know it's there and seek it out. 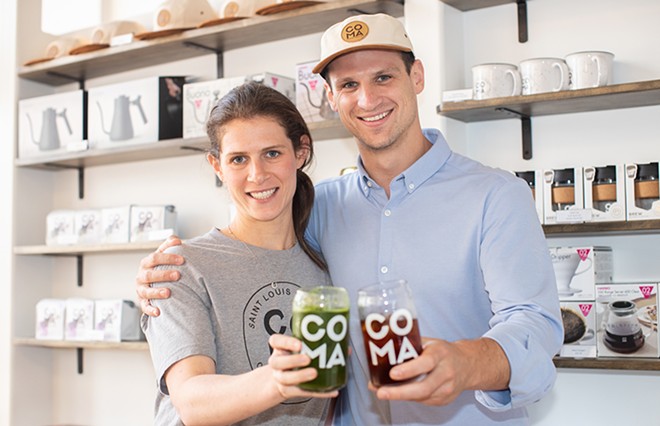 And people have been doing just that — so much so that Holtzman saw an opportunity to expand to attract an even wider audience when the space across the hall became available. The former occupant, Blue Sky Tower Grill, had closed, and Holtzman seized upon the chance to move into its bigger digs and take advantage of its much larger and better-equipped kitchen. With that extra space also came an opportunity to expand Coma's menu beyond simple daytime fare. With Blue Sky gone, the building and surrounding area had lost its natural happy hour spot. Holtzman wanted to provide that, but she knew that Coma would need to be much more than a coffee shop to do so. With that in mind, she hired a chef, brought on a beverage director and took her next big leap in the hospitality business: expanding Coma's identity from simply a daytime coffee spot to an evening meeting place.

The gorgeous, modern space that Coma has now occupied for the past three months begs for that sort of concept. The soaring, two-story room looks like the sort of restaurant you'd find in a modern art museum. Floor-to-ceiling glass encloses the room on two sides, an aesthetic that carries over to the half-wall of glass that serves as the railing for the upstairs loft area. The place does not feel sterile, though. The coffee bar, which sits in the middle of the first level, takes up much of that floor's real estate and provides a cool, bustling hub filled with plants, pastries and other warm touches.

In expanding to include evening service (temporarily on hold at press time due to a staffing shortage), Coma has not lost its fundamental identity. Daytime offerings remain solid, such as the Brussels sprouts hash, an outstanding dish of the roasted and balsamic-dressed vegetables tossed with crispy bacon crumbles and topped with two sunny-side-up eggs and chives. The flavors — earth, salt, savory, sweet — are in perfect harmony. 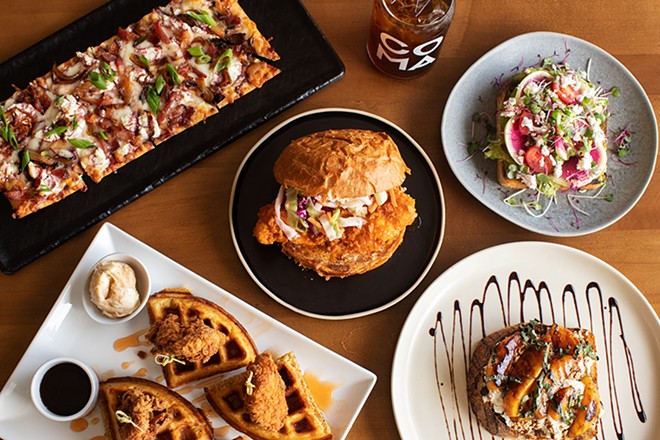 That balance is also present on the breakfast sandwich. Unfussy yet interesting, the dish features two pieces of griddled and sea salt-dusted Companion white bread filled with a fried egg, bacon, aged cheddar and a drizzle of honey that ties everything together. Blackberry and burrata toast is another dazzling daytime option. A thick-slice of toasted sourdough is topped with the luscious cheese, whole blackberries and microgreens, then dressed with honey, balsamic and black pepper. It's avocado toast's glamorous Italian cousin.

If its wonderful daytime fare sets a bar, Coma's new evening offerings hit it — and then some. The Brussels sprouts that were so delicious on the breakfast menu are also excellent when dressed for dinner. Here, the vegetables are fried to a crisp, then glazed in a sweet and spicy Asian barbecue sauce; the effect is similar to hot braised chicken, only vegetarian. Chicken and waffles is another dish that flawlessly bridges the day and evening concepts. Rather than simply chicken tenders placed atop waffles, Coma integrates the flavors. The seasoning on the thick strips of chicken tastes similar to that in the waffles; both have a whisper of warm spice that is brought out by the hot honey and cinnamon butter that garnishes the dish.

Cauliflower tempura is shockingly delicious. Perhaps the menu's sleeper best offering, the battered vegetables have a crisp, golden exterior and perfectly cooked interior. However, the unexpected addition of a very light honey garlic glaze makes them transcendent. The fried pickles are another tasty snack item. Bread and butter pickles are covered in mildly spiced breading, giving them a warm heat that is mitigated by a side of dill-forward ranch dressing.

A simple steak salad, dressed with onions, tomatoes, blue cheese crumbles and dressing, is noteworthy thanks to the perfectly-cooked ribeye. The medium-rare steak, glazed with balsamic, then sliced and served atop the greens and accoutrements, would be at home on a steakhouse's table. Even more impressive is Coma's goat cheese burger, a smashed patty topped with so much of the tangy cheese it oozes out from every side of the bun like a glorious mess. Sun-dried tomato aioli mixes with the cheese to form a mouthwatering concoction that could be bottled and sold like they do their cold brew.

That you can have such a magnificent burger, then wash it down with a mind-blowingly delicious pistachio latte for dessert is the beauty of Coma — and a testament to how, like Holtzman, sometimes you need to be pushed down a path to know it's where you were meant to be all along.