Cocina Latina Is a Delightful Addition to the CWE

Nineteen years ago, Maritza Rios arrived in St. Louis with a plan to open Cocina Latina. Granted, she didn't have the name, or even the concept, completely fleshed out. She just knew that she wanted to bring a taste of her native Peru to her newly adopted city.

And what she did have was the experience to back up her plan. For more than two decades, Rios had been cooking in a variety of restaurants throughout New York City after arriving there as a teenager. Even after she went to school for accounting and found herself working office jobs, she could not leave behind the restaurant business. She realized it was likely her life's calling.

The only hitch in her plan was St. Louis itself. Though Rios was confident in her family recipes and cooking skills, she was not as sure of the reception an authentic Peruvian restaurant would receive in the Midwest. So she put her dream on hold and went the safe route, opening an American-style Mexican restaurant, El Paisano, in Jefferson County in 2001.

El Paisano found success, and Rios expanded the concept to three more locations. However, a car accident that left her bedridden for eight months thwarted further expansion. She sold the restaurants to her now ex-husband, saving only the south-city location on Watson for herself, and focused on her recovery. 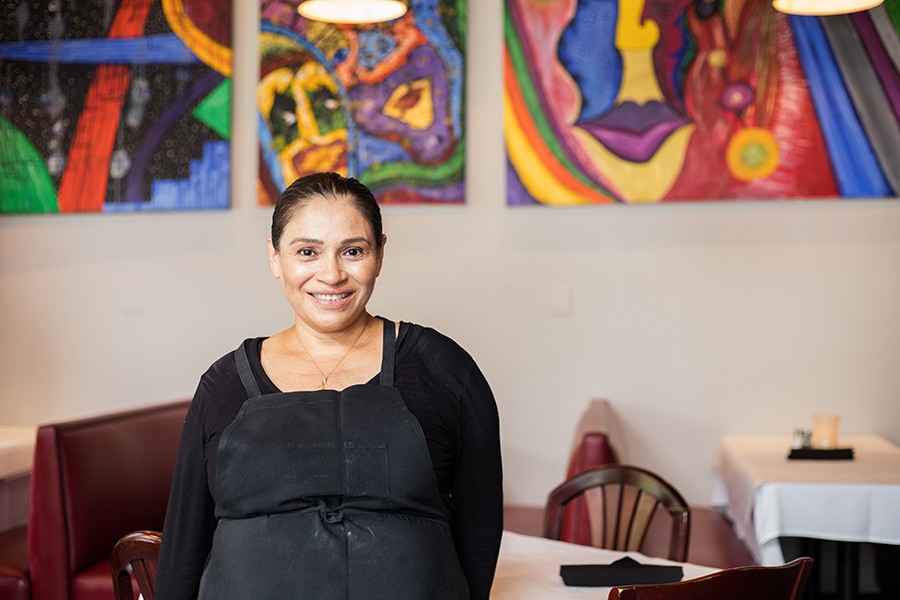 That focus would again shift when her father needed major heart surgery. For months, Rios stayed by his bedside at Barnes-Jewish Hospital, becoming a de facto resident of the Central West End. When she needed a break, she would walk around the neighborhood, soaking in its charm and daydreaming about opening a restaurant there one day. The area reminded her of New York, and she was confident it would be amenable to an authentic Peruvian restaurant. She just had to find the right opportunity.

Even after her father got out of the hospital, Rios would regularly visit the Central West End, scouting properties all the while. It took fourteen years, but she finally found the right one, settling on a vacant storefront just south of the corner of Euclid and Washington avenues. For two years, she worked with a local architect, her husband and an artist friend, Jose Gomez, to convert the space from a dingy blank slate into Cocina Latina. 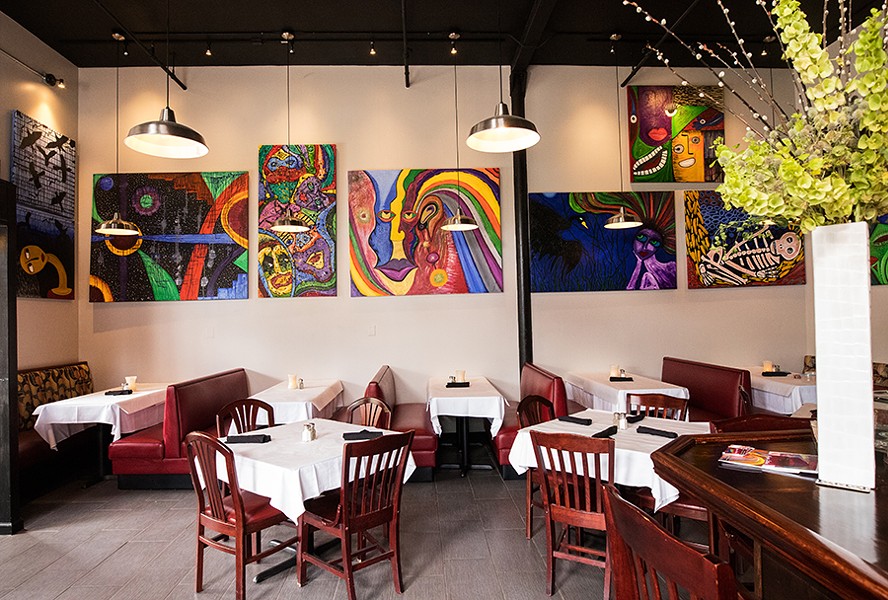 The restaurant, which opened in February, is a vibrant realization of her vision. Dark wooden tables and banquettes with multi-colored upholstery take up the majority of the seating area. Additional space is available at the cozy bar in the rear. Paired with cream-colored walls and black-painted ductwork, these features might make for an unremarkable dining room, but Rios smartly filled the room with Gomez's Technicolor, Latin-inspired paintings. They give Cocina Latina the feeling of an art gallery as much as a restaurant.

The edible art that comes out of the kitchen is just as striking. Cocina Latina is mostly a Peruvian restaurant, although Rios also includes both Colombian and Caribbean specialties, representing her husband's heritage and her kids' favorite foods, respectively. However, the heart of the menu are dishes derived from her old family recipes — dishes Rios learned to cook as a kid growing up in Peru from her grandmother.

That includes anticuchos de corazón, or beef heart skewers, marinated in a mild chile paste that caramelizes on the grill. For anyone averse to organ meats, this is a spectacular introduction. Even my picky five-year-old couldn't tell the difference between the beautifully charred beef heart and a hunk of grilled sirloin — and I certainly won't be telling her anytime soon. It's enough that she loved it. 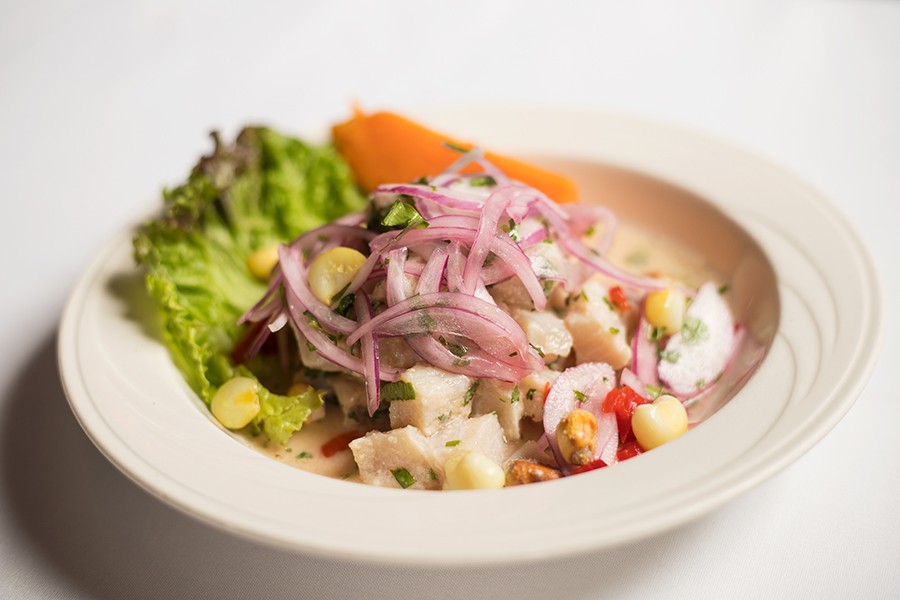 Cocina Latina's ceviche is even more dazzling. Rios describes her grandmother as having a heavier hand than most when it comes to seasoning, a style reflected in Rios' liberal use of fresh lime juice and aji limo peppers, which combine to make a flavor so mouth-puckering it's positively electric. Cubes of fresh seafood are kissed by this delightful nectar and then tossed alongside Peruvian corn nuts, fresh herbs and slivers of red onion. It's like fireworks going off in your mouth.

The razor-sharp acidity of the ceviche is a striking contrast to the warm comfort of the tostones con ahogado, a Colombian specialty akin to a veggie stew. Tomatoes and green onions are slow-cooked to the point that they break down, forming a chunky sauce that can be spooned over the accompanying fried plantains. The plantains themselves are chewy, but once the tomato concoction soaks in, they soften to a much more pleasant texture. 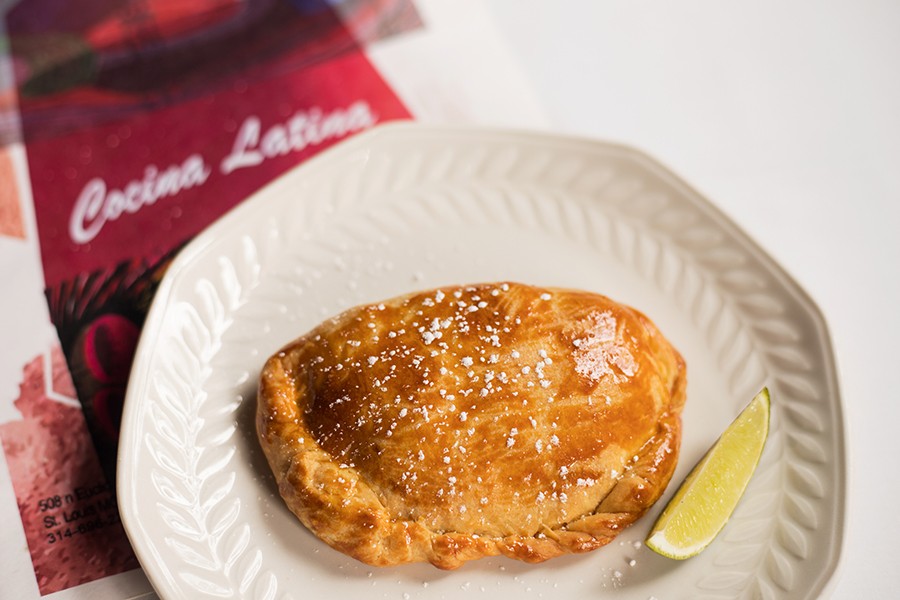 The difference between the two cuisines is also apparent in the empanadas. For the Colombian version, flaky fried dough is filled with beef and potatoes that taste as if they have been slow-cooked in spicy gravy flecked with tomatoes and green onions. The heat does not hit you over the head but creeps up with every bite, culminating in a spice that tingles the tongue. The Peruvian empanadas are milder, and their exterior has an entirely different texture — more like a biscuit than its Colombian counterpart. Inside, the beef is firmer, more like shredded steak, which is encased in the dough with its cooking liquid. It's a good thing it's unnecessary to pick favorites, as both are delightful. 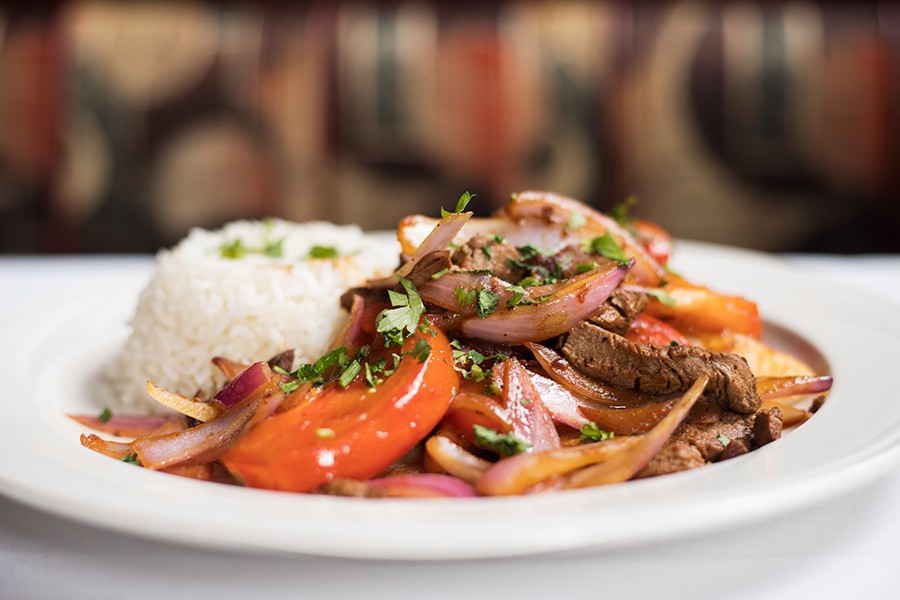 Rios is equally adept with main courses. Lomo saltado, a Peruvian stir fry of tenderloin, red onions and tomatoes, is like a deeply savory version of beef stew, only with better-quality meat. The tenderloin is succulent and flawlessly cooked, its juices forming a beefy broth that cooks with the softened tomatoes, onions and diced potatoes, turning them into tender, pot-roasted vegetables.

Tallarin verde might make you think, upon first glance, that you've stepped into an Italian restaurant rather than a South American one. Linguini are slicked with a verdant basil-and-spinach sauce similar in both taste and appearance to pesto. However, unlike the Italian sauce, the tallarin verde contains evaporated milk, giving the dish a slightly creamy texture while softening the basil's intensity. A simple grilled chicken breast is served alongside the pasta. It may look like a throwaway, but don't be deceived: The tender chicken, seasoned with a garlicky black pepper rub, is perhaps the juiciest white-meat chicken served in the city. It's simple, but done perfectly enough to be dazzling. 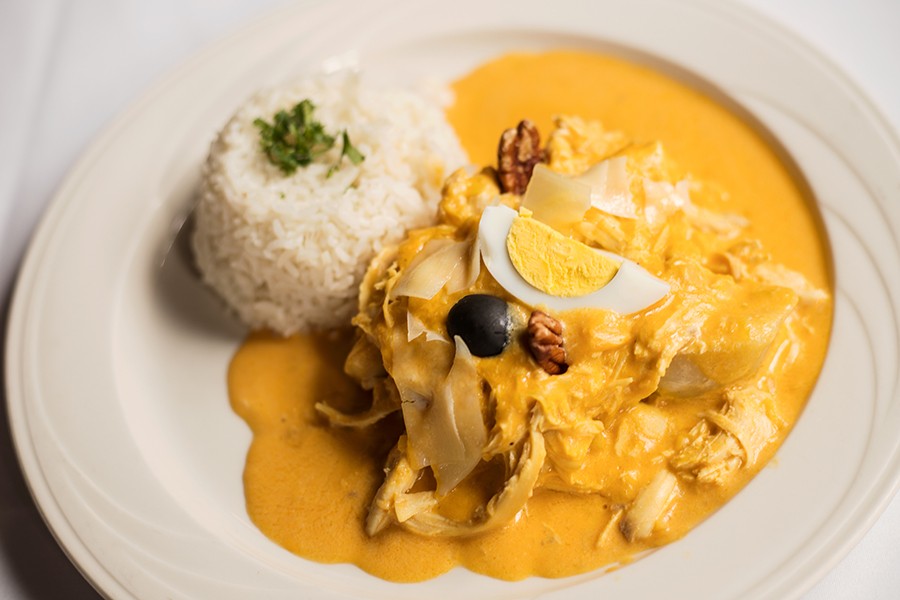 Aji de gallina, a traditional creamy chicken stew, is Peru's version of Grandma's chicken soup. Shredded chicken, simmered in a creamy, mildly spiced aji amarillo pepper sauce, is garnished with olives and slices of hard-boiled eggs — it's like a cross between chicken enchilada filling and egg drop soup. As a matter of preference, I found it overly rich and flat, though perhaps in the middle of winter (or high up in the Peruvian Andes), I'd better understand its popularity.

I needed no such intellectual exercise to enjoy the mahi mahi, a new addition to Cocina Latina's menu that is hopefully here to stay. The mild fish is served in a delicate tomato broth perfumed with oregano and cilantro; the moist meat tastes as if it's been poached in the fragrant liquid. In a parade of wonderful dishes, it stole the show. 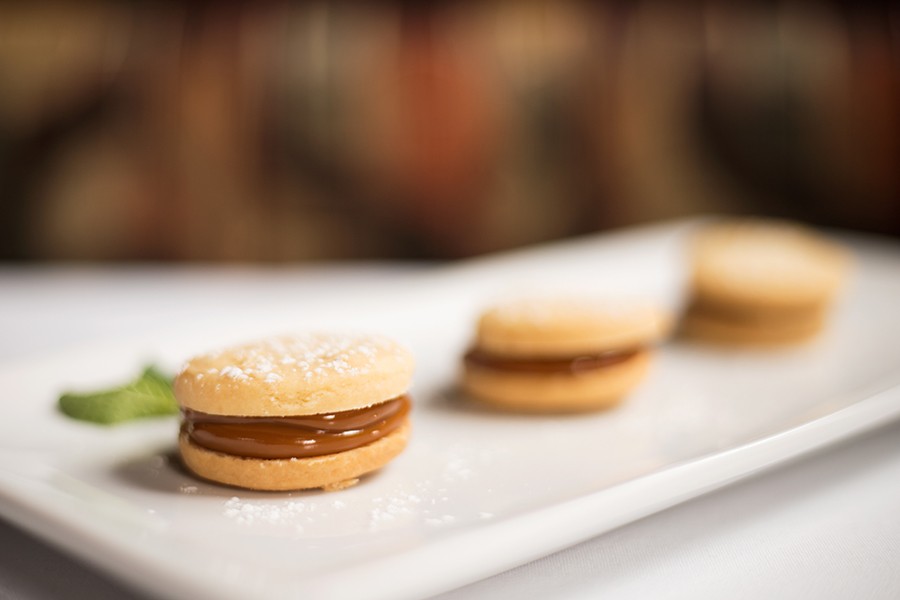 Rios offers a handful of homemade desserts straight from her family's recipe book. Creamy rice pudding is perfection of the form, balancing the rich, liquidy components of the dish with firm-yet-tender rice grains. The biggest delight, however, are the alfajores — caramely dulce de leche is sandwiched between buttery shortbreads that melt on the tongue almost instantly, their toasty sweetness lingering long after the last bite.

It's hard to imagine that there was ever a time when those cookies — or the haunting flavors of mahi mahi, or the magnificent lomo saltado — would have met a less-than-enthusiastic reception. And in hindsight, perhaps Cocina Latina would have been a success nineteen years ago. Still, Rios insists that the timing just didn't feel right until now. She had mistakes to make, she admits, and she's happy they worked out the way they did, opening the doors for what is now her baby. And besides, why rush? A restaurant like Cocina Latina is certainly worth the wait. 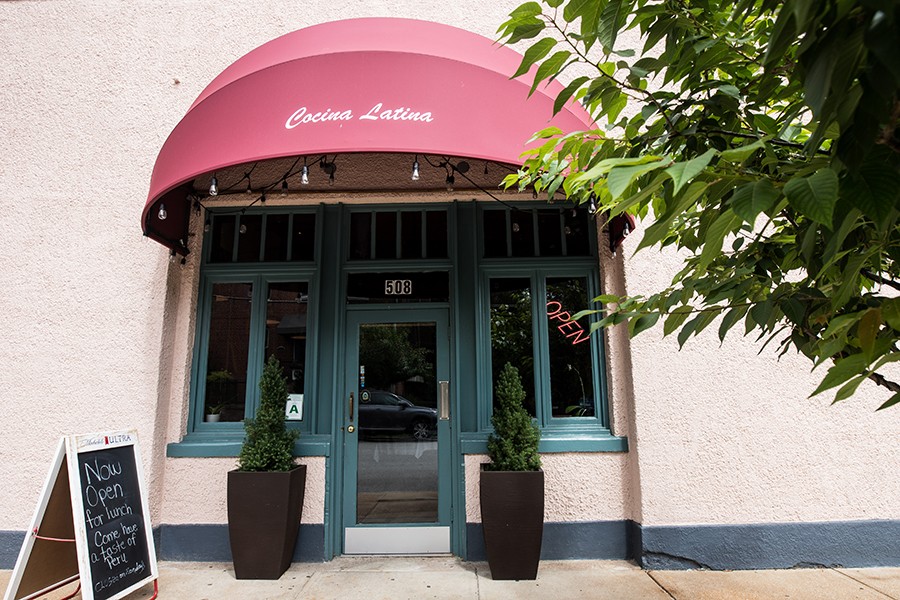