When St. Louis Sings the Blues

PHOTO BY NATE BURRELL Says Renee Smith, "The Blues is my life."

A few weekends back, an appreciative, modestly sized audience gathered inside one of south city's linchpin music clubs, Off Broadway. Over the years, the club has played host to hundreds of evenings dedicated to the blues. This night, too, was embedded in that sound, though the show, called the Blue Lotus Revue, also hinted at soul, R&B and rockabilly. The studio/label led by Paul Niehaus IV was showcasing the many hues of the blues it's releasing these days, with the evening's second set built around the talents of three vocalists.

Swapping sets, sharing leads and backup roles, engaging the audience in three very distinct manners, Renee Smith, Roland Johnson and Gene Jackson each teased new projects, even while showcasing their vocals on a variety of blues/R&B chestnuts. In a way, the night was a vivid preview of their longer sets at this weekend's Big Muddy Blues Fest, with a core backing band led by guitarist Kevin O'Connor and label head Niehaus supporting on bass.

"I thought the evening went great," Smith, 65, recalls later from her home in East St. Louis. "I enjoyed playing that band — oh, man, just true professionals who can play any and everything. I was really impressed with that band, and anything I asked them to do, they were right there with me, behind me, supporting me."

It was her first time performing with Jackson, though she's worked with Johnson before. "They're both great singers and I was just happy to be on stage with them," she says.

Smith has been given the nickname "Queen of St. Louis Soul." She got her start at age twelve, singing in Mount Zion Baptist Church, and has been performing blues, soul and jazz ever since.

Certainly, at the Blue Lotus Revue, she was an engaging presence, calling on the crowd to let her hear them within a minute or two of hitting the stage. She wasn't the only performer to shine. With a killer backing band, the night's second set allowed Smith, Johnson and Jackson — with help from guest vocalists such as Devon Cahill — to have both shared and solo moments in the sun.

O'Connor, a veteran of the punk/rockabilly scene who worked with both Johnson and Jackson on their albums, marvels at their talent. "Those guys are the real deal," he says.

He adds, "As an instrumentalist who doesn't sing, I love it when singers can play off of each other and harmonize. Roland and Gene play a lot of the same covers, so when we perform one of them and they're both on a mic, all they gotta do is look at each other and they'll just know who's taking the high or low parts. Magic stuff!"

Niehaus has also noticed the two singers' chemistry. "It's a magical dynamic they have together," he says. "While one is singing an original song from his album, the other is adding the best tambourine part you've ever heard in your life, while improvising little call-and-response vocals lines, in a really respectful way."

As the Big Muddy Blues Fest comes to life, each of the performers brings a set of both expectations and history to the event.

Jackson, like Johnson, is keen on showcasing the original material that Blue Lotus Recordings offered in his recent 1963 album.

"After doing cover material for so long," Jackson says, "I never thought I'd have a chance to be recording and playing my own material."

One of the RFT's STL 77 this spring, Jackson was described by writer Roy Kasten as one of the city's finest singers. "His voice stands up to comparisons to the greats of Motown and Chess, and with this year's album, 1963, he lays down straight-ahead soul, with lush horns and spritely rhythm," Kasten wrote. "His soul is classy and classic. It's hard to believe this is Jackson's first official release."

Jackson says he looks forward to sharing that work on the big stage of the Big Muddy, in front of an audience that's primed to hear the best talent from St. Louis. Club work is his bread-and-butter, but he's excited to tackle the big stage in a prime-time slot this weekend.

"When you're on that bigger stage, facing a bigger audience, you have more space to perform and communicate, using different angles of the stage. On a big stage, you can talk to everyone. And any time you're doing original music, you want them to get the message and to connect with them, to have them understand what that song is about. You want the message to stick in their head, what you've just sung about. How else will they remember you from anyone else they've seen?"

Jackson gives them plenty to chew on. O'Connor notes how deeply personal some of his tracks ended up being.

"Gene lost a son to heroin just year ago, and a few of his tunes deal directly with that. His other tunes are about falling in love with his wife, staying strong and keeping faith throughout their healing process," he says. "Gene's voice has a bit of a Joe Tex sweetness. His tenderness, empathy, pain and honesty are right there on stage. He proudly tells the crowd before any of his original songs what the story is behind the tune. The video he made for 'Only God Can Help Us' deals with using empathy and genuine help in confronting the homeless/drug addiction problems downtown. ... The pain hit his home and he doesn't want to preach, but rather simply call for help. It's powerful."

Jackson calls the praise for 1963 "glorious."

"I haven't had this much attention in 20 years," he says. "Have you seen the video, yet? Having all that out, it makes you feel so good, that the world and the people are listening."

"I'm always nervous," Jackson admits. "From the smallest show to the biggest." 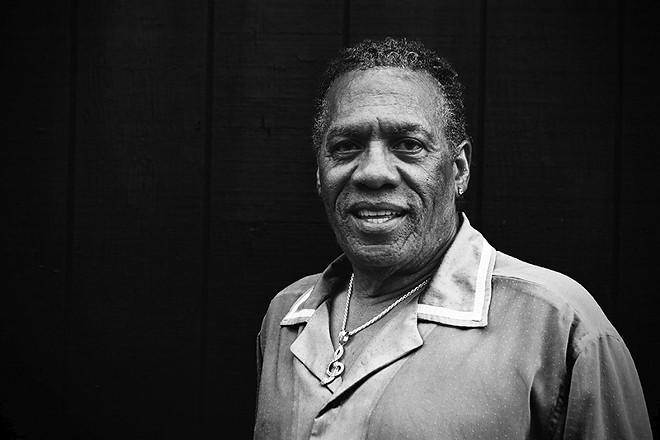 As for Smith, she's used to the big stages. She's proud of having closed out last year's show and notes, "I've been on the Big Muddy stages with a lot of artists, well-known and well-liked around the world. ... It's had a lot to do with my going overseas. I've performed a lot in Asia; Singapore's like a second home to me. Big Muddy's carried me a long way."

There's always a chance that she'll wind up on a stage or two aside from her own at some point in the weekend. Guesting with Mike Aguirre is in the cards for this year and, with a few days to go, there's a chance that another artist might find her receptive. "If I can, I always like to say 'yes' to playing with other people," she says.

"Big Muddy Blues has brought me a long way. I'm grateful to them. The blues need to be continued, there are so many stories to be told. We need to keep the blues going. The blues is my life."

The Blue Lotus Revue plays the Main Stage on Saturday from 9:45 to 11 p.m.