When St. Louis Sings the Blues

PHOTO BY NATE BURRELL Says Renee Smith, "The Blues is my life."

"It's all local," he says. "But just because it's all local doesn't make it not national."

This isn't a riddle. "When Trombone Shorty is playing a festival in New Orleans, he's a national act playing in New Orleans," Segel-Moss says. And in St. Louis, too, numerous "local" artists are also national draws.

He continues, "We have one of the deeper wells of blues, of all traditions and styles, and the idea is to celebrate that. We don't feel that we have to include national acts to make it a successful event. What you often see at any other festival of this type is a name act brought in, like Taj Mahal or Buddy Guy or Nikki Hill. There are lots of acts that are on that circuit and plenty of blues festivals on the Labor Day weekend. But none of them will have our show, with over 50 St. Louis acts. The idea is to celebrate what's going on here, to shine a light on it." 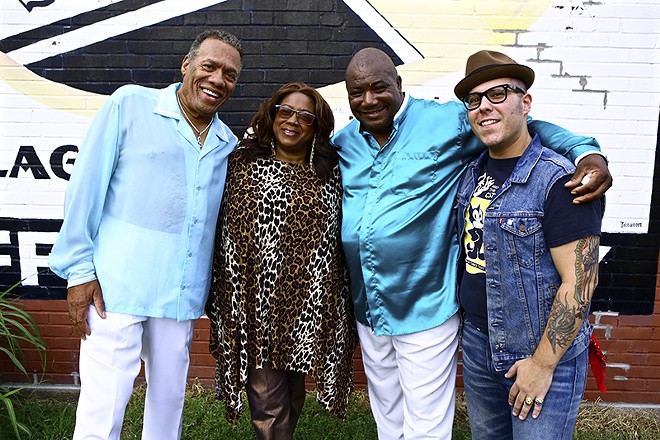 That it's taking place on the Landing adds to the historical resonance. Begun in 1986 by the original members of the St. Louis Blues Society as the St. Louis Blues & Heritage Festival, the event was housed in clubs like Mississippi Nights and on street corner stages for a half-dozen years. In time, the Landing's business district came to own and operate the event.

Now, 22 years into its run as the Big Muddy, it remains in an entertainment district that's sometimes overlooked, or even forgotten, by a generation of concertgoers who've distanced themselves from the zone over the years — yet still has some serious charm.

"As a person who lives in St. Louis, as a musician who has watched music down there my entire life, the Landing is really beautiful. You have these very old buildings, the cobblestone streets, the views of the Arch," Segel-Moss says. "There's been some decimation with the casino and other construction, but there's still this package of about eight square blocks that are some of the most 'St. Louis places' in St. Louis. And when the music is going, it's cool. The music floats through the streets, like it'd be in New Orleans, where you can hear a band playing outside from two blocks away. We're happy to have it there. It's in our history."

Himself a player, as part of the long-running Bottoms Up Blues Gang, and chairman of the current iteration of the St. Louis Blues Society, Segel-Moss is somewhat hesitant to attack the basic question: What is the St. Louis blues sound?

"This is an ongoing question," he says, with just a hint of a laugh. "What is the St. Louis sound? Well, because St. Louis hasn't had the music industry of other cities, the large number of recordings, documentaries, books, it's hard to call out exactly what it is. In a way, the 50 bands at Big Muddy represent the sound of St. Louis, whether Delta blues, or R&B, rock & roll or jazz... we have all of those in our sound.

"In Chicago, you may have the wailing guitar and the harmonica; in New Orleans, the crazy horn sections. But what the older musicians here created leaves a lot space. It's about the complexity of simplicity; like, doing a lot with just one note."

He adds, "I don't even really know if I'm qualified to answer that answer, though I should be able to. But if you wander through the stages, you'll hear similarities in that sound."

The five acts we've chosen to highlight in this issue offer those similarities, yes, but they also offer some real differences. Gene Jackson, Roland Johnson and Renee Smith are the elders, musicians who weren't just influenced by Oliver Sain but worked with him directly. "They're playing in a soul revue, which is a very St. Louis thing," Segel-Moss notes.

Mat Wilson, meanwhile, is a student of Henry Townsend, "playing a very particular type of blues that no one else is doing here," Segel-Moss says, while Annie Linders is in her first year at the festival. She comes from the New Orleans school, what Segel-Moss calls "that style of trad jazz, which is something that St. Louis was affected by, with the music coming up north on riverboats."

Collectively, they represent the St. Louis blues — a sound influenced by many other places, but somehow still all our own. Steeped in history, it remains vibrant today.