Churchill Gives Us a Shakespearean Hero, Flaws and All

COURTESY OF COHEN MEDIA GROUP Winston Churchill (Brian Cox) is haunted by past mistakes as he finalizes plans for D-Day.

It takes either great naivete or great self-confidence to make a film whose plot hinges on something that every single viewer already knows, but that's precisely what director Jonathan Teplitzky and writer Alex von Tunzelmann have done in Churchill. It's a dramatic portrait of England's most famous prime minister, set over four days in the spring of 1944 as the Allied forces prepare to launch Operation Overlord, the D-Day invasion of Normandy. While you may already know the outcome, the film focuses on the agony of those not yet certain, the leaders who lay the plans and weigh the possible results.

In Teplitzky's account, no one suffers over the decision more than Winston Churchill, haunted by memories of an earlier beach landing — the disastrous battle of Gallipoli in World War I. Played by Brian Cox, he's a lumbering beast who transforms over the course of the four days depicted. First, he's seen as a dotty old man who keeps poking his nose into military business, the embarrassing old uncle who thinks wars are still fought with trenches and mustard gas. But as his anxiety increases, he becomes a kind of monster, an angry old warrior snapping at his servants and smashing the breakfastware.

While the core of Churchill is Cox's overpowering portrait of the prime minister on the verge of a nervous breakdown, it also serves as a kind of refresher course in How We Won the War, a brief guide to some of the names and personalities. There are encounters with the stammering King George VI, played by James Purefoy but likely intended to recall Colin Firth's performance in The King's Speech. (Curiously, Churchill's own speech impediment — a lifelong lisp — isn't duplicated.) He also butts head with General Eisenhower, played with great charm but a strictly business attitude by John Slattery. (Well, maybe not all business, since Teplitzky keeps the unidentified Kay Summersby — Ike's reputed paramour — hovering in the background almost every time he's on screen). The film treats these war heroes with respect as well as with realism. It's respectful of the size of these monumental figures, even as it teases the notion of tipping them over.

As period pieces go, there's a refreshing sense of economy to the direction. There are no battle scenes, no CGI landscapes and a minimum of period details. Teplitzky uses props and architectural elements to mask any trace of the 21st century, yet his simple staging, which places the figures against dynamic columns and towering landscapes, gives the film a stark look, even as it almost subliminally reminds the viewer of the heroic stature of its subjects. 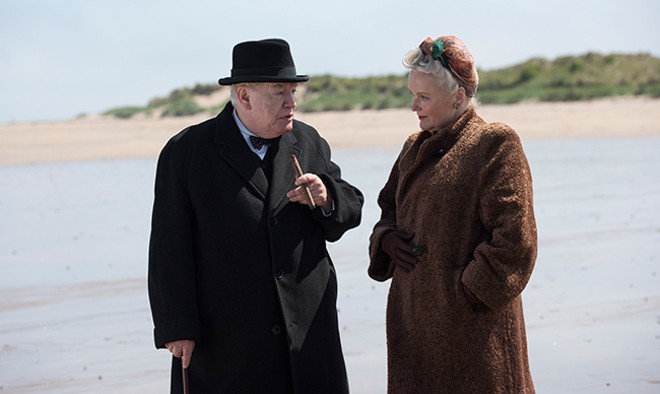 As a history lesson, Churchill is more than adequate, but its real achievement is the raising of its subject to the level of a Shakespearean hero, thanks both to the deceptively low-key screenplay and the vigorous cigar-biting performance of Cox. The other characters stand at the sides in fear and awe, and Miranda Richardson, as Churchill's infinitely patient wife Clementine, flits in and out, a kind of spouse ex machina, but Cox holds the center with a fury worthy of Lear or Prospero. He fumes and sulks and badgers, but we also see the fear and confusion and self-doubt nestled with his bluster. It's a powerfully, subtly human portrayal, a revealing account of a man who fights to retain his sense of heroism, even when his heroic days are long behind him.