THOMAS K. CHIMCHARDS Tommy's sampling of Lava Cake came absolutely encrusted with orange and white hairs and a generous dusting of trichomes, and it was one of his favorites strains so far.

It can be a bit overwhelming, especially for a novice smoker, to look over a dispensary's menu and try to select the product that's best for you. Beyond just the differences in sativas and indicas, each strain has its own unique quirks and personality, and while your budtender will obviously be a helpful resource, it's worth bearing in mind that he's foremost a salesman at the end of the day.

But never fear: Ol' Tommy Chims is here to help. Since we kicked off dedicated weed coverage back in April, I've toiled tirelessly to find the cream of the cannabis crop, visiting a double-digit number of dispensaries all across the St. Louis area and sampling dozens of different products. After all of that arduous work, I've found five strains of flower that I'm ready to full-throatedly recommend.

Read All of Tommy's Dispensary Reviews

Included in each blurb below is where I purchased these strains and who cultivated them. For those seeking them out, you could start by checking the online menus of the dispensaries I got them from, or you can head to Leafly.com, enter the name of the strain and find a list of local locations where they are available. Bear in mind, also, that as St. Louis' medical marijuana industry continues to mature, the quality and selection of its cannabis products will only evolve. In keeping, it's possible that the THC rating on these strains will be different in new batches than it was when I sampled them, so make sure to look closely and ask your budtender if you have any questions. And do hop in the comments to let me know which strains are your favorites — I've not yet managed to smoke every single batch of weed in town (though not for lack of trying), so this list is not intended to be comprehensive.

Without further ado, and in no particular order, here are my favorite strains of flower I've tried in the St. Louis area as of June 2021:

When I dug into the C4-branded pouch of Bubba Fett I purchased at Jane Dispensary, I was greeted with a dark, rich, slightly skunky smell as I broke the small, mostly darker-green nuggets up. On inhale this strain has a flavorful, sweet taste that had me coughing at first, but soon smoothed out into an enjoyable smoke. Let me tell you, this strain is downright stupefying. Before I'd even finished the bowl I felt as though I'd been smacked in the face with the "stoned" shovel, and the bags under my eyes felt like they weighed a thousand pounds. The indica-dominant strain clocked in at a considerable 20.54 percent THC, so it shouldn't be particularly surprising that it's so strong, but I was still taken aback. My chronic pain melted away and I felt relaxed and happy, and pretty hungry. This strain immediately launched itself to the top of my list of favorites, even if I did find the words "Don't panic, you'll be fine, just high" in my notebook upon a review.

Proper's Alien Rock Candy, rated at 15.82 percent THC when I purchased it, brings dark-green buds flecked with a few lighter spots and dark-orange hair clusters, and large trichomes that have the appearance of tiny water drops. When I opened the bag I was met with a warm smell of fresh-cut grass and hints of coffee, and the buds broke up nicely, somewhere between sticky and keefy. On inhale I could detect some light, sweet berry and citrus flavors, and I found the strain to be fairly cough-inducing but pleasant. My batch of Alien Rock Candy delivered a relaxed, mellow high that made my body feel fantastic without pummeling my brain into a stupor. Proper's website refers to the strain as its "calling card," and it's easy to see why. The fact that its more recent batches of the strain have been clocked in the mid-twenties THC-wise ensures I'll be back for more.

Rated at 20.36 percent THC, the Greenlight-branded Lava Cake boasts smaller, dark-green buds with hints of lime green and purple patches, absolutely encrusted with orange and white hairs and a generous dusting of trichomes. The nuggets are tight and dense — really beautiful, well-structured little buds — and I got keef all over my fingers on breakup (a grinder might be the way to go with this one). Both the smell and taste of this strain are exceptionally fruity and sweet — downright delicious, even — and I felt its effects almost immediately. This stuff is strong as hell, and I found myself high as a kite within only minutes, my eyes droopy, my body relaxed and my appetite stimulated to the tune of an entire bag of Lay's potato chips. Handle with care, especially if you are a novice smoker (or on a diet).

The Flora Farms batch of Gorilla Glue that I purchased at N'Bliss came with a lower THC rating than the C4-branded pre-roll I'd sampled previously — 17.1 percent, compared to 19.41 percent — so I was unsure what exactly to expect, but soon found it to be one of my favorites in town. Upon opening the bag I was met with some tight, dense light-green to lime-green buds, frosted with trichomes and a dash of orange hairs. On breakup, there was a strong fuel-like smell, and the buds crumbled apart easily enough, though they left my fingers pretty sticky. On inhale, that fuel taste was prominent but pleasant, and soon I found myself suitably stoned, with my chronic pain delightfully soothed. This batch of Gorilla Glue was definitely less stupefying than the C4 stuff, and I found myself far less spaced-out and forgetful, though I was forgetful enough that I walked away from my notes in the middle of writing about how not forgetful I was and didn't remember to return for a good half-hour or so. Do with that information what you will. 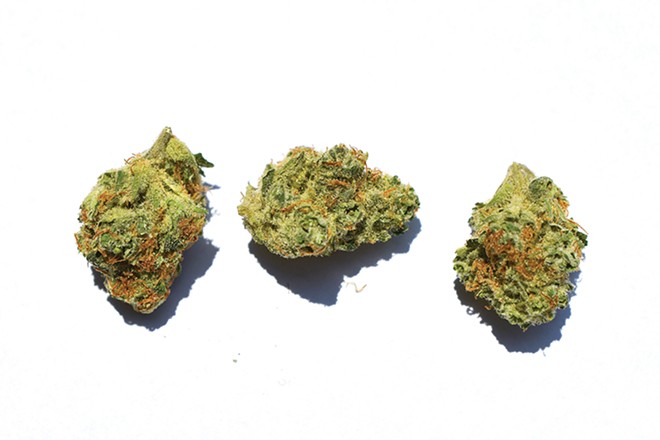 My budtender at Nature Med mentioned this was one of his favorite strains — he'd even picked up an ounce just for himself — and it's easy to see why. Rated at 17.7 percent THC and coming via Flora Farms, this strain was an absolute delight from start to finish. Upon opening the bag I was hit with a fruity tangerine smell like a punch in the face, its beautiful, bright, lime-green buds covered in a fine dusting of trichomes and an abundance of orange hairs. On breakup it had a dryish, almost styrofoam-like spongy crumble, not too sticky, but with a good amount of keef. On inhale it had a delicious sweet taste, with the tangerine flavor popping up prominently on exhale and lingering there. As for effects, I found it to be an energetic and creative high, and soon I found myself pacing my house and racing through ideas in my mind, though I didn't feel any of the anxiety that might usually come with more of an "upper" high. All told, it was simply phenomenal. I really can't say enough good things about this strain, and it will certainly be in my regular rotation going forward, as long as I can get my hands on it.

Thomas K. Chimchards is RFT’s resident cannabis correspondent. Email him tips at tommy.chims@riverfronttimes.com and follow him on Twitter at @TOMMYCHIMS.