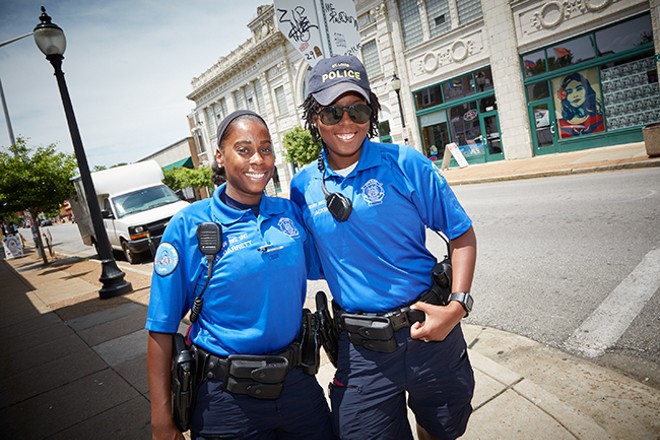 One of the thorniest security questions in this neighborhood is how much to involve the cops.

"There is a love-hate relationship with the police on Cherokee," says Anne McCullough, a spokeswoman for the business association, which is now controlled by the newcomers.

In some ways, the link with law enforcement is as strong as ever: 3rd District Captain Shawn Dace has brought back a pair of officers anchored to the street, even amidst staffing shortages. He says they have made inroads with local kids and helped some folks feel more comfortable speaking to the authorities (which may have contributed to the rise in reported incidents).

Yet some prefer to bypass the police. Cherokee resident Julia Ho, who is the founder of Solidarity Economy St. Louis, has advocated for a restorative justice program. In that scenario, people who commit low-level offenses could acknowledge their misdeeds and make amends outside the court system.

The idea found backers: the Cherokee Street Business Association voted to support it last fall, and even the court's juvenile division said it was on board. But a March 2017 launch date came and went; Ho says the project is on the backburner for lack of funding.

In any case, Ho believes Cherokee cannot police its way out of entrenched problems. For her, crime is a symptom of poverty, and "safety" has different meanings for different people. To a new shopkeeper, "safety" might mean threats on the sidewalk. But a block off the main drag, "safety" might describe the threat of rising rents.

McCullough agrees that newcomers to Cherokee should adopt a broad view — and temper expectations.

"While things can feel very personal, especially when gunshots are happening outside of your window, people need to recognize that gunshots have been happening outside of windows in this neighborhood for twenty years," she says. "It's disheartening for them to make it about them, and not about what they're moving into. It's not an easy fix."

But the crime doesn't come solely from people living in the neighborhood. In some cases, opportunists from elsewhere come to prey on unsuspecting Cherokee customers. And venues that allow an all-ages crowd make some neighbors nervous.

Kaveh Razani, who has been managing 2720 for the last year and a half (and Blank Space before that) welcomes teenagers to Cherokee. "I reject the notion that this street is for people above the age of 21," Razani says.

Ever since bullets flew outside 2720 on April 30, he has had to defend his business practices. While Razani does feel responsible for security inside his clubs, he says he can't control what happens out on the street.

Down the block at Yaquis, Rodriguez disagrees. A career teaching high school convinced him, he says, that kids mature greatly between 18 and 21. Enforcement can't be 100 percent, indoors or on the street, so allowing teens close proximity to liquor is just courting disaster.

Rodriguez went to the Cherokee Station Business Association Meeting on May 18 to make himself heard on these points.

That evening, about 75 people gathered on the second floor of Nebula Co-working at Cherokee and Jefferson. In a humid event space scented with re-finished hardwood floors, the board addressed a crowd composed of dozens of shopkeepers, residents, two aldermen, one police captain, two dogs, and one baby.

For two hours, they hashed out what happened, how it felt, and possible fixes. One young woman fought back tears as she recalled the storm of bullets.

Seated at the back of the room, Rodriguez took his turn to speak. But when others jumped in, he grew frustrated and demanded more time. He began to bicker with three women across the room before losing his temper, shouting, and leaving in a huff (followed by a door slam).

And that wasn't even the finale.

At the end of the meeting, Pat Brannon, the proprietor of Casa Loma, raised hackles.

"I get asked to have rap shows," he said. "But I turn them down." He said rap promoters were not ideal business associates, and on top of that, "I know the type of person that's gonna come in. They're not gonna respect the Casa Loma."

Incredulous, Razani interrupted him: "Can I address the room? Do I need to respond to this?"

Meanwhile, Pacia Anderson sat at one of the tall tables, disgusted. A community organizer originally from Alton, she has lived in the Cherokee neighborhood since 2014. What she heard in Brannon's words was this: Black youth are the problem. She was offended.

She gathered her things to leave when the person next to her put his hand on her arm. It was state Representative Bruce Franks Jr. (D-St. Louis). A Ferguson protester and battle rapper, Franks won an upset victory last November against one of the city's old-guard political dynasties and now represents the area in Jefferson City.

"I got this," he whispered.

Franks made his way to the front and spoke. First, he noted all the rap and hip-hop shows he personally had played at Razani's clubs, without incident.

"You're right," he told Brannon. "It is the promoters. But it's not necessarily this genre of music or these types of people. Because the type of people that you're talking about is me. You've been over here for a long time. I have too.

"There's really no place in the world like Cherokee," he continued. "I really think we should concentrate on what solutions we could possibly give to 2720, help empower them, help to grow their business, as we help to grow every other business on Cherokee and within the surrounding area."

The crowd applauded — and seemed to exhale.

A week later, Francis Rodriguez sits in Yaquis, dissatisfied. He had hoped for a consensus on a curfew for minors. Instead, he'd lost his temper.

As he runs through his policy argument again, the deeper reason for his behavior emerges: He is still traumatized by the shootings on April 30.

"It makes it hard for me to go to sleep," he finally says, after a pause. "I can't really go to sleep until I know people are out of our building and are safe. I'm afraid I'll go to sleep and somebody will walk in and kill them." He chokes up. "I couldn't live with myself then."

"Look," he continues. "There's a river of good will flowing down the middle of Cherokee in an otherwise hopeless place. If you're right on Cherokee, you can stick your toe in this river. You feel invigorated. The lights are on. People are drinking. People are happy."

He gestures south into the state streets.

"Walk down that way. There's no party. There's no flow down there." But he sees no alternative to effort and hope. He wants everyone in the state streets to feel the same hope for Cherokee that he feels — police stats and political grudges be damned.

Editor's note: A previous version of this story misstated Pacia Anderson's background. She grew up in Alton, not Belleville, and moved to the Cherokee neighborhood in 2014. We regret any implication to the contrary.