You can tell how long someone has lived in the Cherokee neighborhood by how they pronounce the street name. Newcomers punch the first syllable (as in "CHER-o-kee"). Lifers tend to lean on the back end ("cher-o-KEE").

Francis Rodriguez is a lifer. A restaurateur and artist with wintry stubble, Rodriguez has spent most of his 58 years on Cherokee and the surrounding grid of "state streets." He watched the area flourish in his youth, then hollow out by the 1990s. Now he is a pillar of its remarkable turnaround — a movement of which he is fiercely protective, especially lately.

Rodriguez embodies Cherokee's idiosyncrasy. Despite his Latino surname, he speaks no Spanish, but understands some German, having spent time in Europe as a child. His paternal ancestors were the native Yaqui people of Mexico. That explains why, when he quit teaching biology at Gateway High School to launch a wood-fired pizza joint on Cherokee in 2014, he named it "Yaquis."

Rodriguez is a kinetic man. He is quick to erupt in anger and just as quick to apologize. While many neighbors his age lean conservative, Rodriguez leans left. His pizzeria has emerged as an informal hub of progressive politics on the city's south side. It's where revelers at the Cinco de Mayo festival have bludgeoned piñatas of Donald Trump, and where former rapper Bruce Franks, Jr. stood atop the bar to celebrate his underdog win in last summer's statehouse race.

Liberal bona fides aside, Rodriguez is also a product of a rough-and-tumble ethos. He has zero patience for delinquency, and has been known to chase down purse-snatchers and to brandish a .22-caliber handgun in self-defense.

"Growing up in this area breeds a certain kind of toughness," he says.

But even he wasn't prepared for what occurred in the wee hours of Sunday, April 30.

Rodriguez lives above Yaquis with his wife, Beckie Lewis, and their daughter, now eighteen months old. Shortly before 1 a.m. on that date, he heard a commotion on the street below. Half a block east, the nightclub 2720 had just hosted a free eighteen-and-up EDM show. Scores of patrons were spilling out. An argument flared.

Rodriguez decided to get dressed and check on his staff. After lacing up his second shoe, he heard a loud BANG just outside. Then gunshots cracked up and down the street.

He raced to the rear of the apartment, where Lewis was now awake and trying to shield the baby on the floor. He rushed downstairs to Yaquis. Patrons were taking cover. At the entrance, a woman attempting to flee the gunfire got stuck in the doorway. Rodriguez pulled her in, then locked the front door.

And then, he remembers, he went into "a blind rage." He stalked out the back door and onto Iowa Avenue, where the crowd was scattering and shell casings littered the pavement.

It was over. At least 60 rounds had been fired — most, apparently, into the air. They were so loud, people heard them from a mile away. While nobody died, two went to the hospital with injuries, and one taco truck was left with a shattered window.

After the police arrived, Rodriguez walked back upstairs to take a breather. He stepped into his bathroom. He vomited. Neither he nor his wife slept the rest of that night.

He became more convinced than ever that Cherokee's bars and clubs were no place for minors — and he couldn't wait to give the local business association a piece of his mind.

"I know I'm a bully," he says. "I try to work against my darker nature. But when I have to put my baby on the floor, you motherfuckers are going to listen to me."

Over the past nine months, Cherokee Street — ground zero for the city's DIY art and nightlife scene — has suffered a rash of violence. The effect has been sobering. Those who brought about the street's cultural and political flowering did so organically, without a master plan or much interest from City Hall. But their work required a fertile soil of cheap real estate, which came mixed in with poverty and crime. They knew it was a tough place, but with investment, might get better. Now that crime is on the rise, Cherokee denizens want to protect what they've grown — but they'll have to make peace among themselves first.

It's not merely that stakeholders disagree on whether to address crime with a hard or soft approach — that is, incarceration versus conversation. There are also personal rifts that linger from the old political order being swept aside by younger upstarts.

Some of this is the inevitable result of gentrification, the process by which a once-abandoned neighborhood gets renewed. Yet on these blocks, textbook dichotomies don't hold. Nothing is as simple as old versus young, black versus white, or wealthy versus poor. Cherokee has become a complex web of personalities, all trying to pull their neighborhood to safer ground. They're just not pulling in the same direction. 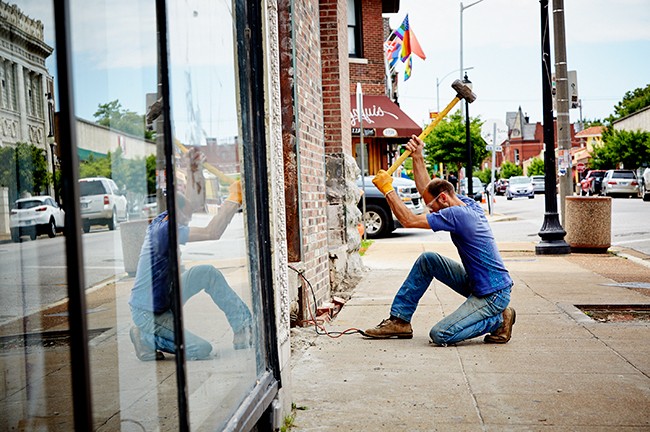 Francis Rodriguez has no direct memory of the grand sweep of Cherokee's past — how it grew from a grazing pasture in the 1800s to a commercial strip a century later. He never saw the electric streetcars rolling past Woolworth's after World War I, nor did he get to hear a young Frank Sinatra croon at the Casa Loma Ballroom in 1939.

But Rodriguez, born in 1958, did witness the tail end of that boom. He sold Globe-Democrat newspapers at crowded taverns in the late 1960s. He also participated in the tit-for-tat of old-school ward politics: His family helped campaign for local alderman Louis "Uncle Louie" Buckowitz, who in turn helped Rodriguez land a lifeguard job at public pools.

By the time Rodriguez graduated from Roosevelt High School in 1977, deindustrialization and white flight were draining American cities. Cherokee Street was not spared. East of Jefferson Avenue, some antique merchants managed to stay afloat. On the west side, most storefronts went dark, save the odd pharmacy or head shop selling bongs to suburban teens. Crack use, alcoholism, prostitution and homelessness became common. Things got bleak enough that even Rodriguez himself moved to Crestwood in 1993 and stayed there for many years.

But in the early aughts, there was a quiet rebirth. Hispanic entrepreneurs trickled in to sell groceries and tacos. Developers found architectural gems of red brick and restored them. Poor young artists, meanwhile, took advantage of low rents to set up galleries and play loud guitars.

Over the course of a decade, the steady stream of energy, dollars and foot traffic rose into a wave. In 2013, Cherokee saw 23 new establishments open. The next year, 22 followed, with 25 more in 2015 and an additional sixteen in 2016 — a total of 86 new businesses and nonprofits in just four years.

Among them was Yaquis, opened by Rodriguez, his wife and a third partner, Joe Timm, in 2014. Last September the trio opened a burger-slinging dive bar called the B-Side down the block. Rodriguez has poured most of his finances into these ventures — one reason among many he is so concerned about crime.