Kelly Reichardt is a fiercely independent realist so at odds with the current fanboy-driven, corporate-sculpted movie culture that each of her films seems like a form of protest, an act of defiance. Her films are subtly political without ever losing their intimacy. They're miniaturist pieces that reveal big truths, like 2008's Wendy and Lucy, one of the very best of this still-young century, in which the wanderings of a homeless young woman and her dog are a microcosm of the crashing Bush-era economy and its effect on ordinary people. Even a relative misfire like Night Moves (a kind of Monkey Wrench Gang-lite) offers glimpses into the lives of ordinary people at a personal level rarely shared on screen. Reichardt's films — even her period piece Meek's Cutoff — are inescapably contemporary, not through name-checking passing trends but by including the quotidian details that make up our emotional atmosphere.

Certain Women pulls together three loosely connected threads drawn from stories by Maile Meloy. I'm not familiar with Meloy's work, but in Reichardt's adaptation it's almost a stretch to call them stories; they're sketches, incidents, little glimpses of emotion. Set in rural Montana, the three barely intersecting stories feature four women who are slightly lost, overwhelmed by their environments, which are social as well as physical.

Laura (played by Laura Dern) is an attorney trying to appease a confused client who refuses to accept that she's lost the case. The second, Gina, played by Michelle Williams, is the center of an almost plotless account of a wife and mother planning to build a home off the grid, even as her relationships are fragmenting. Fittingly, the only actual drama involves Gina persuading an elderly neighbor (a great performance by Rene Auberjonois) to donate a pile of sandstone for her project.

The longest and most substantial section involves Jamie, a lonely young ranchhand (Lily Gladstone, the film's most outstanding performance) who wanders into the local schoolhouse where Beth (Kristin Stewart) makes a four-hour drive twice a week to teach a night school law class. The two women fall into a friendship that is almost a love story, a collection of awkward, frustrating moments between people who don't know how to communicate with each other. They're left with an uncomfortable silence.

And silence is one of the things Reichardt's films do best. As a filmmaker, she's content to watch and listen. Her films are about real people, their lives conveyed not merely by their words but by the simple fact of their existence. Uniquely independent even within the indie world, Reichardt is unmatched as a chronicler of The Way We Live Now. 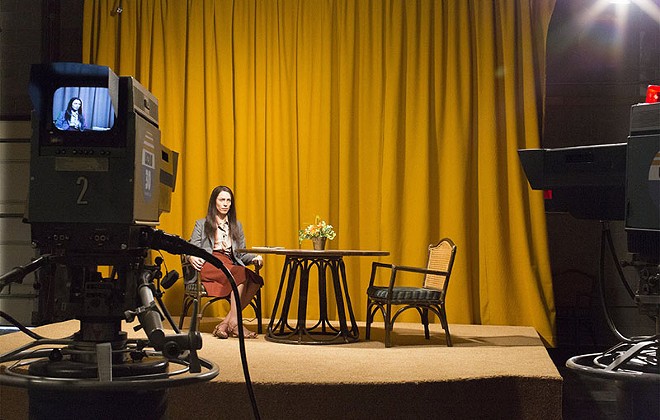 Antonio Campos' Christine is the story of Christine Chubbuck, a TV host in Sarasota, Florida, who shot herself in the head during a live broadcast in July 1974, ostensibly as a protest over the increasingly violent tone of local news coverage. (Christine is one of two new films based on Chubbuck's death. The other, Katie Plays Christine, will play at the St. Louis International Film Festival next month.)

As sensitively portrayed by Rebecca Hall, Chubbuck is a strange, unruly figure: neurotic, self-deprecating and even a little childish. She's the most contrary person in any room, the kind of person who can't stop blurting out whatever she thinks, no matter how self-defeating it is. When her boss defends a decision by saying it's simple math, she has to point out that he is in fact using logic, not math.

Living with her mother and with no hope at romance as she nears her thirtieth birthday, Christine retreats to her age-inappropriate bedroom, complete with pictures of the Carpenters and a rainbow-bedecked record player to plan her career move, having promised to retool her good-natured community reports to expose "the darker side of Sarasota."

Craig Shilowich's screenplay captures that unbalanced side of its subject, along with some telling potshots at the news business. The film becomes a little overloaded emotionally but has a genuinely weird balance of psychological drama and outright absurdity (Michael C. Hall, good as the station's pretty-boy news anchor, takes Christine on a date to a Transactional Analysis meeting), all set to a rich soundtrack of early '70s happy pop. Despite the comic tone, which makes you wonder what might have happened if Anchorman had pre-dated Network, the film gives a strong sense of the many forces (social, professional, personal) pressing in on Christine and makes the inevitable conclusion both tragic and disturbing. It's easy to laugh at the outdated period clothes or the not-as-outdated-as-we'd-like-to-think sexual politics, but Christine adds a darker edge to the glossy nostalgia, showing a woman not just tormented by her own demons but by the social structures that created them.