CBD Kratom's Customers Swear By Its Product. The Feds Want to Make It Illegal 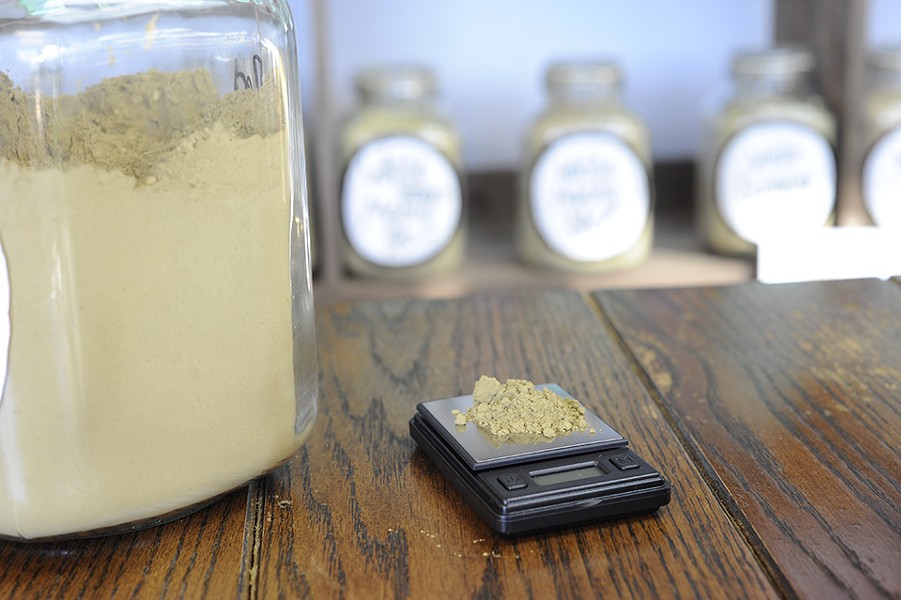 KELLY GLUECK For $20, you can get enough kratom to last a week or so. Some users are convinced it's a wonder drug.

On Morganford Road in Tower Grove South, between a fitness studio and a sports bar, sits CBD Kratom. What at least a few neighbors have mistaken for a large pot leaf is decaled on the store's window. Written in chalk on the sign out front are the questions, "In Pain? Anxious?"

Inside, the wall behind the counter is lined with jars filled with kratom, a drug that looks like pale green sawdust. Affixed to each jar is a label: Red Bali, White Gold, Green Sumatra, Yellow Borneo. There are more than 40 different strains.

The menu is helpful for first-timers, breaking down where each kratom strain originated from and how it affects the user. Yellow Borneo, for instance, is said to provide "euphoria, a strong clear minded energy." The Green Maeng Da is described as a "very effective pain reliever" that also "gives you a strong boost of energy." Variations of "euphoric" — a "simple euphoric effect," an "intense euphoric effect," "extremely euphoric" — appear all over the menu. Some strains are better used as a pick-me-up, others ideally taken before going to sleep. If you have questions, the woman behind the counter can tell you more about kratom than most Starbucks baristas can say about coffee.

Kratom powder looks like it should dissolve in liquid, but it absolutely will not do that. It's like sand in that way. It's also incredibly bitter on the tongue. Some consumers brew it into a tea; others scoop the powder into a capsule. Many settle for what is called a toss and wash, putting kratom on their tongues and washing it down as quickly as possible. Kratom is sticky, though, and a toss and wash is a lot like trying to do the same thing with cinnamon; it's probably going to take several swigs. David Palatnik, the 28-year-old owner of CBD Kratom, takes some of the energy-boosting Green Malay strain every morning in lieu of drinking coffee. He mixes it in a smoothie or, if he's feeling lazy, washes it down with orange juice.

The powder sells for around a dollar a gram, and typically users take around three grams a serving, more if they want a more potent effect. A few customers who live in rural parts of Missouri and Illinois come once every couple of months and buy the product in bulk, but Palatnik says it's much more common for customers to spend $15, $20 on enough product to last a week or so. A handful of regulars stop in every morning — the shop opens at 8 a.m. — to buy a single serving to go with their morning coffee.

A lot of the people who stop in CBD Kratom think of their purchase the way most people think of coffee: a little boost to make the day easier. Others swear kratom is a wonder drug, something just short of a miracle. It alleviates their chronic pain. It cured their depression. The Food and Drug Administration and the Drug Enforcement Agency both say kratom is deadly and should be illegal.

Thirty-nine-year-old Boska Hunter-Hannan falls squarely into the "wonder drug" camp. Since high school he managed pain from a degenerative disk with the prescription opiate Vicoprofen, taking a pill every four hours and facing withdrawals when his most recent dose lost efficacy or when he wasn't able to refill his scrip.

Then one day last July his wife, who works at a tea shop in Columbia, Missouri, brought home a sample of kratom that had been sent to the store as a promotional freebie.

Hunter-Hannan said his first inclination was to throw away the powdery substance. It looked a little bit like instant coffee and nothing like the tea leaves his wife normally sold at the store. He thought that maybe he'd heard of kratom and that it was bad. Nonetheless, he googled it and read that kratom allegedly helps in the management of chronic pain. He was dubious, but he'd been taking prescription painkillers for so long he was willing to give kratom a shot. He doubted it was going to do much of anything one way or another.

"Twenty minutes later," he says, "my pain was gone and I was telling my wife, 'Wow, this is not a joke. This is real. This is awesome.'"

Seven months later, Hunter-Hannan describes that day as his "aha" moment. He'd found something that not only managed his pain but was also all natural with fewer side effects than the opiates he was prescribed. Now he tells anyone who will listen about kratom. He's given kratom to friends. When his boss at his IT job complained of chronic pain, Hunter-Hannan gave him some, too.

By taking kratom in the morning, followed by another dose or two throughout the day, Hunter-Hannan has been able to more than cut in half the amount of Vicoprofen he needs. Vicoprofen made him drowsy, but he compares kratom to a strong cup of coffee that also makes him feel good.

"It's got the opiate feel," he says. "It's got a little bit of that euphoria that you're not going to get with coffee, but the high is not like what you get with Vicodin or anything like that. It's really simple and not something that you crave."

Afterwards, did the tea store where his wife works start stocking kratom?