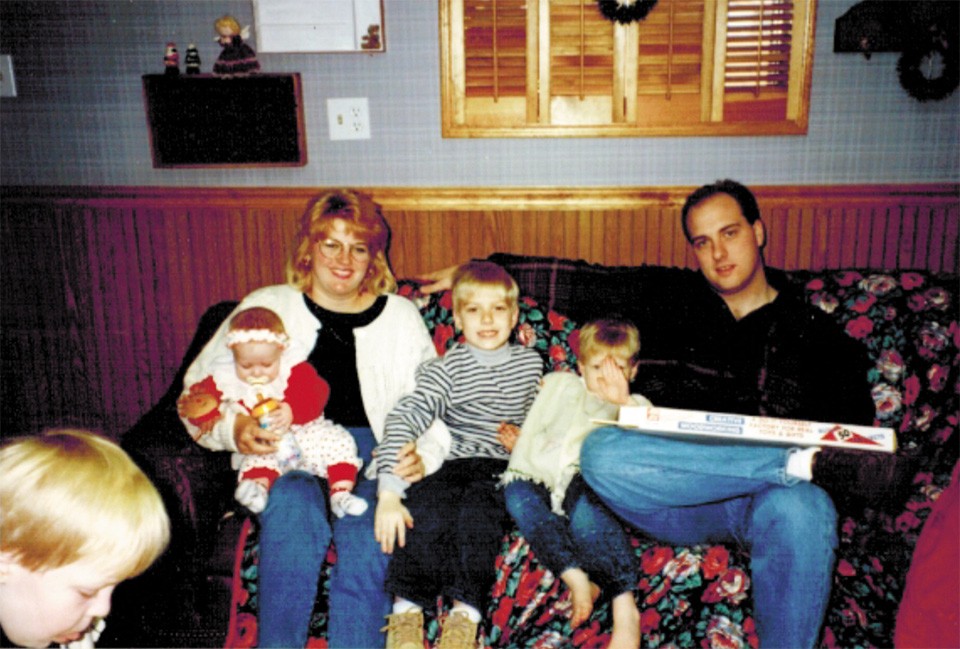 In August 1997, less than three weeks before Cort VanOstran's ninth birthday, his father killed himself.

Charles "Andy" VanOstran, a flight medic, had moved his young family from Joplin to Columbia, Missouri, the year before. He planned to go to medical school. Instead, he committed suicide at age 28, leaving a widow and three children. Cort was the oldest child.

His grandmother, Barbara Riechman, remembers that birthday. "We did everything we could to make the best of it," she says.

In a bolt of inspiration, Riechman, now 74, came up with a detective contest for young Cort's party. The rules are vague in her memory, but she remembers that kids and adults played together.

"There was an hour there I could see all of those kids having fun," she says. "I can tell you it was the best feeling."

When VanOstran mentions his father's death, it is usually an introduction to his mother. He typically explains that after his dad died, Cathy VanOstran devoted her life to her children. As a single mom, she raised two boys who would go from rural Missouri to Harvard and a daughter who has done humanitarian work across the world. Riechman says her daughter, a teacher, stayed single after her husband's death in order to focus on the kids.

Cathy VanOstran died in 2016, two years after she was diagnosed with breast cancer. VanOstran cites her death as the impetus for his congressional bid, pointing out in campaign ads that Wagner gleefully voted to eviscerate the Affordable Care Act, which his mother relied on during her last years.

Even when he was young, VanOstran was included in important family decisions. He was suddenly the eldest male, and relatives say he grew up faster than most kids.

"I know in those weeks after, Cort at eight years old had a sense that he needed to help out more than most eight-year-olds," sister Callie VanOstran says. "I think it shaped both of us in who we are today. Caring for others is something we want to do with our lives."

VanOstran has posted the number to the National Suicide Prevention Lifeline on social media and called for more discussions of mental health. But his father's death is not something he publicly dwells on. Often, when speaking to groups, he says he "lost" his father at a young age or his dad "passed away" before moving on to his mother.

In an interview, he says he was "very aware" as a kid of the suicide.

"I mean, I was there when he..." VanOstran says before redirecting. "I have very vivid memories of that day."

He looks back on that time with new understanding. "I think about, now I am about the age my mom was when my dad passed away," he says. "So it's only really now that I realize what an absolute tragedy that must have been for my mom and what a sort of life-altering thing that must have been to have three kids under the age of ten and to have your partner, you know, take his life like that. I can't imagine what she went through."

The family moved back to Joplin a year after the suicide. Callie VanOstran says their mom ensured theirs was a happy home.

"My mom was very intelligent, very witty in fact," she says. "She always had a comeback. She was the relaxed one. She made sure we were all enjoying life."

After his dad's death, VanOstran read hungrily, tearing through Roald Dahl, the Boxcar Children, Goosebumps and Beverly Cleary series. He says that turned into a love of school and learning.

"I think in any tragedy, you can find a silver lining, and I think you have to look at the good things that can come out of something bad," he says. "That was a good lesson, frankly, to learn early."

Retired Joplin High School teacher Leann Stausing first met VanOstran in one of her English classes. He seemed more grown-up than the other kids.

"He is absolutely one of my most memorable students," she says. "He has a brilliant mind. He is a hard worker, and he is so goal-oriented."

He did a little of everything in high school. Profiles in the Joplin Globe list activities and awards including National Merit Scholar, show choir, Key Club, Fellowship of Christian Athletes and National Honor Society. He was the prom king, student council president and the male lead in two plays, portraying the wealthy Horace Vandergelder in Hello Dolly and the handsome Jimmy Smith in Thoroughly Modern Millie.

A teenage VanOstran told the Globe he planned to study law and hoped to be a U.S. senator one day. Such ambition isn't always easy to live with; he was such an orderly kid that he recalls taping a divider across the bedroom he shared with his younger brother Collin, hoping to protect his side from his sibling's messier habits.

Stausing says she knew early on that VanOstran wanted to go to Harvard and helped advise him on his application essays. Not many Joplin kids leap to Cambridge, but Stausing says his discipline and work ethic made it seem inevitable.

"I was glad when he got his acceptance and it was in hand, but I really never had much doubt he was going to get in," she says. "And I don't think anybody in the school was shocked."

Stausing retired in 2008 after 45 years and relocated to northwest Arkansas. She eagerly follows her star student's campaign.

"I'd sure come up and vote for him if I still lived in Missouri," she says.