On a Sunday morning in late September, Cort VanOstran steps outside to the parking lot behind his two-bedroom apartment in Clayton.

It is about 7:20 a.m., shortly after sunrise. Cars shooting past on South Hanley Road still have their lights on. Campaign staffer Alex Dubinsky is already waiting beside an idling Honda Fit. He stashes a few "Cort VanOstran For Congress" yard signs behind the back seat and says he has the stereo cued up with some classic rock to get them going. VanOstran laughs.

"Alex is nineteen, so what he considers 'classic' can be kind of offensive," he explains.

Not that VanOstran grew up in the era of hairbands, either. The lawyer with blond hair and a boyish face is just 30 years old. Dressed casually in a T-shirt, gym shorts and running shoes, he could be a grad student getting an (extra) early start on kegs and eggs. But today, like every day since VanOstran launched his campaign fourteen months ago, is a workday. Over the next eleven hours, he will hit four events scattered across Missouri's Second Congressional District and fill the time in between calling as many potential donors as possible.

It is a grueling schedule, to be sure, but one that seems to be paying off. He won a hard-fought primary in August, capturing more than 40 percent of the vote despite a field of four competitors. Political analysts now put the Joplin-raised Harvard grad within striking distance of U.S. Representative Ann Wagner (R-Ballwin), a three-term incumbent who has dominated a succession of Democrats going back to 2012.

On the drive to the 5K, VanOstran and Dubinsky are in good spirits. Dubinsky jokes that he is racing to win, while VanOstran promises to jog instead at a "politician's pace" — slow enough to smile and wave.

In the parking lot, they meet up with VanOstran's campaign manager, Claire Botnick, and 23-year-old sister, Callie VanOstran. After a quick greeting, they split up, each meshing easily into small clusters of the fit and politically active. The race is sponsored by Clean Missouri as part of its campaign for election and lobbying reforms, and so the crowd is packed with politicos.

This morning is less about campaigning per se and more about checking in with supporters before the final weeks' sprint. VanOstran glides from conversation to conversation, handshake to handshake. "He's a mingler," Dubinsky says.

One of Clean Missouri's goals is to revamp the process for drawing election districts. To illustrate the point, the route is a nonsensical series of twists, doubling back on itself and changing directions, gerrymandering in road-race form. As runners gather at the start line, the emcees call a young woman to the front and joke that in the spirit of Missouri elections they have declared her the winner before the race has even begun. 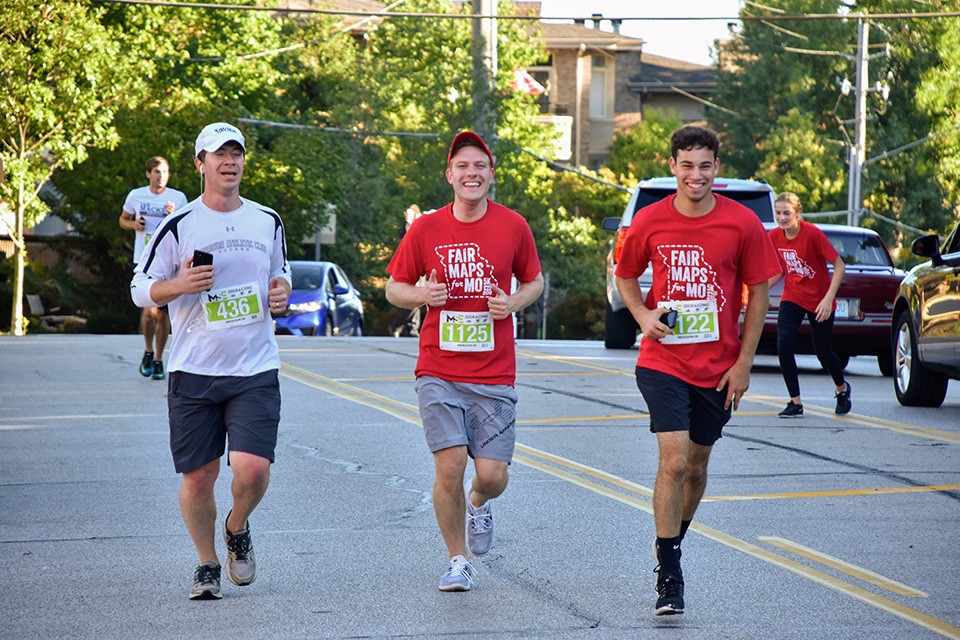 VanOstran, a regular runner, gamely jogs alongside a friend and Dubinsky for two miles before Dubinsky dashes ahead — earning him office bragging rights. VanOstran finishes in a respectable 25:59 and is quickly back to working the crowd, sweating but smiling.

Clean Missouri campaign director Sean Soendker Nicholson, no stranger to Missouri politics, predicts this could be a year of shakeups. "He picked a good year to run," he says of VanOstran.

The young lawyer makes it look easy, effortlessly chatting up strangers and allies, teasing Dubinsky about abandoning his running buddies. The people who've known him the longest say he's always been good at this. He makes friends and moves forward, always excelling, always reaching out. He learned long ago how to thrive during the struggle.