Ever since Tommy Andrew was a young cook working the line at the iconic Monarch restaurant, people in the industry have been calling him "Tommy Salami." The name, given to him all those years ago by acclaimed chef Josh Galliano as a nod to his upbringing on the Hill, just rolled off the tongue and stuck — so much that he's had several people ask him if Salami is his real last name.

However, if you've dined at Nomad, his year-and-a-half-old restaurant inside Tamm Avenue Bar, you'll wonder why he hasn't officially changed his name to "Tommy Pastrami." The stunning meat, Nomad's signature dish, is not just good; it's outrageously good. Shockingly good. Unarguably the best pastrami in town — if not the state, or even the entire planet. Brined in toasted herbs, spices, sugar, salt, honey and a number of other secret ingredients, then rubbed with mustard and black pepper before it is smoked, the pastrami has layers and layers of flavor far beyond the one-dimensional black pepper heat typical of the deli staple. Even with all of the different ingredients going on, the predominant tastes that strike you are smoke and beef — brisket that's so marbled it slicks the tongue with the fat that lingers after the first bite. How you could ever associate this man with any other type of processed meat is incomprehensible. 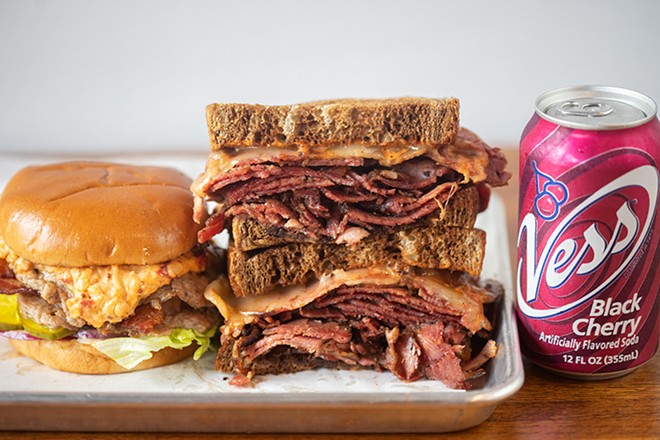 This is precisely what Andrew wanted. For five years, the longtime chef has dreamed of opening a sandwich spot — but not just any sandwich spot. He wanted to have the sort of place that had a thing, and there was no question that his place was where you'd go for it. It made sense that pastrami would be that thing for Nomad. A self-described pastrami lover, Andrew had been perfecting his recipe for years, going through about a hundred iterations of the dish before he felt he'd finally gotten it right. Once he had it locked down, he knew that he did not simply want to make it into a great sandwich; he wanted to build a restaurant around it.

Andrew would get that opportunity when his friend Bob Brazell approached him about opening up a food concept inside his Dogtown bar, Tamm Avenue Bar. Brazell, who also owns Byrd & Barrel and the Tenderloin Room, had been thinking about filling the food void left behind when Tamm's previous tenant, Mac's Local Eats, left to open inside Bluewood Brewing. For Brazell, there was no question that Andrew was the one to take over his bar's kitchen; for Andrew, it was the ideal location for what he wanted to do. After going over the details and chatting about the form the shop would take, the two sealed the deal and converted the space to Nomad, which opened in February 2020.

As Andrew tells it, Nomad launched at the worst possible time to open a restaurant, but it was the best type of restaurant to open for the time. With a carry-out-friendly menu, casual concept and location inside an already-established bar, his business was able to survive the two-month shutdown and subsequent challenges that arose because of the pandemic. The time off also allowed him to rethink his original opening vision. Though he debuted with a much larger menu, he quickly realized that he was overly ambitious and trimmed many of the offerings to focus on some core items.

He also reconfigured the space. Whereas Mac's had operated through a tiny window where guests would walk up and order, Andrew understood the logistical nightmare that presented for the bar. With food patrons crammed in a small hallway between the window and the bar and a line that snaked around the bar to the front door, it made things really tight. He realized right away that the best way to operate would be to close the window and convert the adjacent space that Mac's had used as a grocery store into a dedicated area for Nomad. Doing all the work himself, Andrew created an ample, counter-service space, adorned with plants and modern western-style animal figurines, that allows people to congregate comfortably.

Though Nomad's customers can find comfort in the space, the anticipation for the food that Andrew serves out of its still-tiny kitchen is almost unbearable. His pastrami is the backbone of the menu, appearing on a number of items, including the signature pastrami sandwich. For this monstrous mouthful, he piles the meat on top of marble rye bread with melted Swiss cheese and tangy "special sauce," which tastes like less chunky, chili-sauce-infused Russian dressing. It's an impossibly wonderful sandwich — one where you wonder why anyone would order anything else at the restaurant.

But he doesn't stop there. The pastrami is also featured on the Double Deuce, which is a thin, grass-fed beef smash burger patty (you can opt for as many patties as you'd like) topped with the cured and smoked meat, swiss cheese and special sauce, all stacked onto a pillow-soft brioche bun. It sounds over the top, but the pastrami is akin to putting bacon on a burger, the thin slices of meat adding both flavor and fat to the patty. He takes this same approach with the pastrami poutine, a pile of fries that are magically crispy on the outside and as soft as mashed potatoes on the inside. The fries are covered in seasoned white gravy and molten Provel cheese, then topped with scallions and crumbles of pastrami that Andrew describes as the burnt ends of the meat that break off when he slices it. He takes these glorious meaty bits, fries them and covers the fries with them for an outrageously decadent dish. 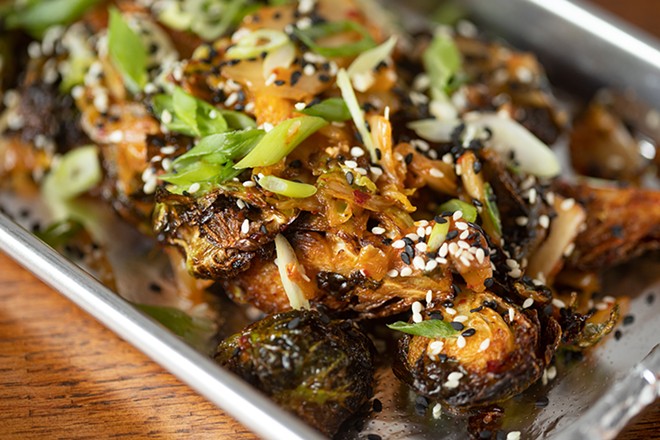 However, Andrew is no one-trick pony. His Dumpster Fire sandwich involves no pastrami whatsoever but is still incredible. Here, he takes two mouthwatering patties of ground heritage pork, pairs them with bacon and pimento cheese and stacks them on brioche. A cauliflower gyro is an exciting surprise for such a meat-centric place as Nomad, placing the roasted vegetable as the centerpiece of an intensely flavorful vegetarian option filled with cucumbers, olives, red onions, tomatoes, feta and a searing-hot roasted poblano tzatziki. Brussels sprouts are another hit; instead of simply roasting them, Andrew fries the sprouts until the outside gets a wonderful crispy texture, then tosses them with deliciously funky kimchi and sesame seeds. The earth of the Brussels and the kimchi combined with the spice make for a powerfully flavorful dish.

If the pastrami is the must-try sandwich, Andrew's arancini is Nomad's must-order appetizer. The cheesy risotto balls are unbelievably creamy and seasoned throughout with crumbles of Italian sausage that are potent enough to add flavor but crumbled so small as to not impact the velvety texture of the interior. The accompanying roasted red pepper marinara, piquant and seasoned with herbs, pairs beautifully with the sausage's robust flavor.

Dishes like the arancini and the Brussels sprouts are clear nods to Andrew's fine-dining background. But the care he takes with every last dish demonstrates his prowess as a chef and why he's earned a place in the conversation as one of the most exciting talents in the city's culinary scene — and that pastrami shows why he's earned a new nickname.