Vito LaFata III wants to capture Sicily in a box. Though his first restaurant, Vito's Sicilian Pizzeria & Ristorante, has become an institution in its 23 years of existence, the second-generation pizzaiolo just doesn't feel it fully encapsulates what it's like to be on the island off Italy's boot. The hustle and bustle of casual cafes, the banter with world-class bullshit artists preparing pizzas in open kitchens, the coffee, gelato and sense of community — he may have nailed the food at Vito's, but the Sicilian spirit, at least in his mind, has proven more elusive.

Café Piazza is his answer to this, a love song both to his family's Sicilian homeland and his father, whose pizza shop in Gaslight Square in the 1960s was even more famous for the way its owner remembered each customer's order than its delicious pizza. LaFata grew up watching his dad, awestruck by the way he interacted with his customers. It was the part of the business he loved most, and the part that got away from him while running his successful Midtown restaurant. There, he does the bookkeeping, the bill-paying and the human resources — the drudgery, not what inspired him to open a restaurant in the first place.

After visiting the old country a few years back, LaFata left reinvigorated and determined to reclaim his passion. To do this, he decided to open a place that would embody the spirit of a Sicilian piazza, a gathering place for neighbors to convene over food and drinks. But though he knew exactly what he wanted to create, he kept hitting stumbling blocks. He eventually tabled his idea, taking a detour into the prepared foods market to produce his mother's red sauce, Mama's Sugo, for distribution.

Things finally came together when LaFata found out that the building at the corner of Lemp and Arsenal in Benton Park was becoming available. He partnered with his sous chef at Vito's, Tim Meinecke, and got to work gutting the space and turning it into a combination sit-down cafe (Café Piazza) and a fast-casual takeout spot (Café Piazza Now).

Originally, LaFata had intended for the fast-casual side to be the business, as he wanted a concept that could be replicated elsewhere. That changed when he met graffiti artist Paco Rosic, whose claim to fame was painting a graffiti-influenced, trompe l'oeil-style replica of the Sistine Chapel in his parents' Iowa restaurant. LaFata hired him to do the artwork for Café Piazza and was so impressed with the results that he decided the entire concept had to change. The ceiling mural depicting aspects of St. Louis history from Lewis and Clark to the Clydesdales was such an interesting conversation piece he felt it deserved a more formal setting — a place where strangers dining together could discuss it and find a sense of community. In other words, exactly the Sicilian experience he had been hoping to capture all along. 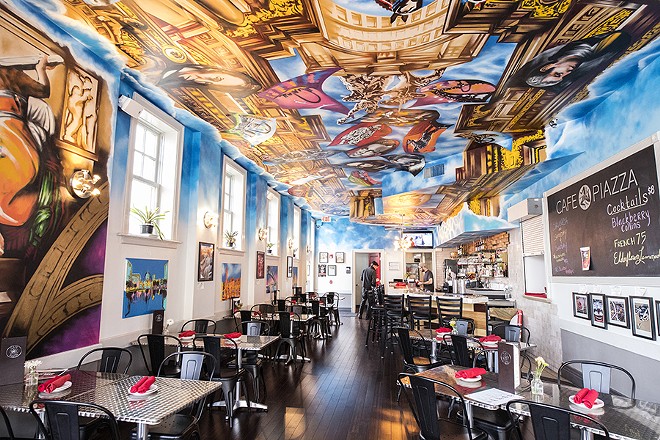 LaFata did not throw out the fast-casual idea altogether. Instead, he opted for a two-restaurants-in-one concept, with one side of the building for takeout, quick meals ordered at the counter and a forthcoming housemade gelato counter called Café Piazza Now. He dedicated the other side to the sit-down Café Piazza. The two entities share a kitchen, menu and wall, but not the room; you have to exit one to get to the other.

Stepping inside, it's no wonder LaFata felt the room with the artwork deserved more than a fast-casual counter. Rosic's mural is indeed impressive, taking up the entire Café Piazza ceiling with all of its vivid and colorful detail. The painting spills onto the white-washed walls, with various portraits providing a street-art take on St. Louis luminaries. Even the bar carries the theme: Rosic's discarded spray-paint cans are built into the bottom of the bar near the foot rest. The bar takes up almost the entire length of the space; the rest is filled with metal tables and chairs that allow the room's colors to bounce off them. 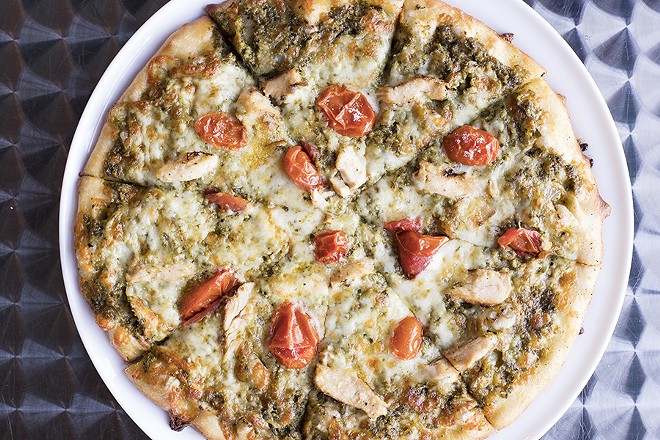 The bulk of Café Piazza's menu is made up of pizzas, courtesy of the massive, four-ton deck oven nicknamed "Big Mamma" that serves as the restaurant's workhorse. The searing hot, wood-fired behemoth allows the thin-crust pies to crisp up and get little specks of char around the edges — not quite as extreme as a Neapolitan pie, but approaching it. In that sense, the Margherita is inspired by, not a replica of, the quintessential Naples pizza. A simple crushed tomato sauce coats the dough, which is topped with mozzarella, cherry tomatoes and fresh basil. More like the hybrid of a New York-style slice and a classic Margherita, it may not be traditional, but it is solid.

Bucking tradition entirely, the "Bogart's BBQ Pizza" is one of Café Piazza's standouts. A welcome change from the ubiquitous barbecue chicken pizza, this version features succulent pulled pork atop sweet, molasses-y barbecue sauce from local Bogart's Smokehouse and just a touch of mozzarella cheese. Unlike chicken, the pork stays tender and juicy when cooked, giving this the feel of a mouthwatering pulled-pork sandwich in pizza form.

A handful of pizzas, though tasty, did not come out as advertised. The "Prosciutto & Arugula" was supposed to pair uncooked prosciutto, fresh mozzarella and white-balsamic-tossed arugula on a simple sauce-less crust, brushed with olive oil. Instead, the base was covered with tomato sauce, muddying the delicate flavor of the ham. It was inoffensive, but would have been better as described.

Likewise, I expected the "Quattro Formaggi" to be in the style of a traditional Italian four-cheese pizza: all cheese, no sauce. This, too, had a tomato-sauce base. Though I cannot vouch for how it would have turned out without this addition, it was welcome, if not unexpected. The simple, rustic sauce marries smoked scamorza mozzarella, fontinella mozzarella and shaved parmesan for the cheese pizza of your dreams. If this was an accident, may accidents keep happening.

The Sicilian-style pizzas are thick and square-cut — and represent the best of Café Piazza. Though it sounds straightforward, the "Traditional Sicilian" dazzles with its lightly spiced and herbaceous chunky tomato sauce and molten mozzarella that melds into the focaccia-like crust so that it's hard to say where one ends and the other begins. The marriage of crust, sauce and cheese is simple yet heavenly.

The same preparation serves as the base for the Sicilian-style "Il Piesano," although on this version, prosciutto, marinated portabella mushrooms and ricotta are added. As with the thin crust "Prosciutto & Arugula," I would have preferred a white sauce for the preparation. The red sauce proved just too heavy for the prosciutto, and its delicate flesh shriveled like the skin of a lifelong sunbather in the searing hot oven. Compared to the "Traditional Sicilian," the additional ingredients were unnecessary.

Though pizza is the focus, Café Piazza's sandwiches are solid, reminiscent of the sort of East Coast Italian fare you'd find in a New Jersey diner. Both the chicken parmigiana and meatball sandwiches are exemplary: gooey melts of cheese, meat and tomato sauce in crusty bread, the sort of pure, simple comfort you expect from the genre.

There were a few misses in the appetizer department, though. "Gus' Prosciutto Pretzel," a nod to Café Piazza's neighbor, tasted stale and bland. The panzanella, a traditional version of the Italian bread salad, tasted fine enough, in the sense that a sweet Italian salad you get on the Hill is fine enough. However, there was more lettuce than bread, making it seem more like a salad with a lot of croutons rather than a true bread salad. And the chili was simply quizzical. On one occasion, it was a rich, beefy ragout, flecked with Italian spices — so hearty, you could eat it with a fork. It was so delicious, I ordered it on a second occasion, only to be disappointed with a thin, liquidy dish of soup overwhelmed by Tabasco. The inconsistency was confusing.

Arancini, however, made up for just about every misfire. The fried rice balls, a Sicilian mainstay, are perfection of the style: perfectly round spheres of rice, breaded, fried and served with a beefy tomato sauce. These alone are worth a trip to Café Piazza.

It might be a lengthy trip, however. On one of my visits, Café Piazza clearly had some flow-of-service issues. The three pizzas we'd ordered arrived one at a time, with significant delays between them. Though we had planned on trading pieces amongst ourselves, we were forced into an outright sharing arrangement, lest several guests eat while the others waited. Appetizers took a while, too. Our server was polite and apologetic, but it seemed like something was off in the kitchen.

LaFata seems to be aware of this, likening Vito's to a grown, self-sufficient child and Café Piazza to a fussy newborn that requires you to remain in near-constant crisis mode. And his business model is ambitious. Though my visits were limited to Café Piazza's dinner service, the restaurant is open for breakfast and lunch as well. Likewise, the fast-casual Café Piazza Now is an additional car in the train he is driving. LaFata is a well-seasoned restaurateur, and I'd place my bet on anyone who knows how to make arancini like Café Piazza's. I'm hopeful that he and his crew will get their feet under them and deliver a solid neighborhood pizzeria.

In the meantime, though, is there really all that big of a hurry? Sitting amongst friends with the wine and conversation flowing while listening to the banter of the bartenders and soaking in the awe-inspiring artwork, Café Piazza is doing its job if it gets us to slow down a little — just like they do in the old country.