Chef Rob Connoley had some basic ideas about the form he wanted Bulrush to take even before he moved back to St. Louis three years ago from Silver City, New Mexico. However, his aha moment wouldn't happen until much later when he received a message from someone who heard about his nascent research into Ozark cuisine.

The writer, a former Kaldi's employee who was born and raised in the Ozarks and has since moved out of town, reached out to Connoley with a profound message that would go on to shape the restaurant. "You don't know me," the message began, "but I've been following what you are doing and can't tell you what this means to me. The food you are doing is the food my family and I ate because we had no money. We ate off the land, and it was always embarrassing to me. What you are doing is really special to me, because it's elevating our food in a way that makes it feel important."

Until that point, Connoley knew he wanted to open a restaurant in St. Louis with a certain ethos. He'd use ethically sourced ingredients, employ creative techniques to ensure a zero-waste kitchen and pay his staff a living wage — all components of what he thinks fine dining in 2019 should be. He also knew that he wanted to incorporate foraging into the menu, a method for obtaining ingredients that had thrust him into the spotlight in 2012, earned him a James Beard semifinalist nod and inspired his cookbook, Acorns & Cattails.

However, seeing those words from a stranger awakened a sense of responsibility in Connoley and gave him a concrete vision for Bulrush that dovetailed with his own upbringing. A St. Louis native who grew up in the northwest St. Louis County suburb of Bridgeton, Connoley had always envisioned Bulrush as centering around the food he and his family enjoyed on weekends and during the summer at their cabin in Ste. Genevieve. Though he never thought of it in a larger culinary context, he knew it was both personal and rooted in the land — two factors that were important to his plans for Bulrush.

He began to think of his family's food as "Ozark" when he met his now-sous chef, Justin Bell. Bell, a central Missouri native and lifelong forager, heard of Connoley's return to St. Louis and reached out to see if he'd like to join him on a forage. Instantly, the two connected and realized that the food they grew up on had significant similarities. Bell made the connection to Ozark cuisine, which led the two down a rabbit hole of research into what that term actually meant.

Through church cookbooks, handwritten family letters, in-person interviews and travels throughout the Ozark region (southern Missouri, northern Arkansas, bits of Kansas and Oklahoma), Connoley and Bell began to sketch out an idea of Ozark cuisine, focusing on the period of 1820 through 1870. Those years were natural bookends: 1820 represented the earliest written record they had (at the time), while 1870 was the point at which the genre appeared to be overtaken by outside influences. Armed with this wealth of information, the two had what they needed as their jumping-off point for a restaurant that would explore this unsung piece of food history and, in turn, give voice to a marginalized culture.

That last factor — the comedic and disdainful lens through which regions like the Ozarks and Appalachia are viewed — was at the forefront of Connoley's mind as he sketched out how to execute his idea for Bulrush. There was a tone he had to get right, which meant that at no point, whether through food or decor, could he veer into caricature. This is why, when you walk into Bulrush knowing that you are at an Ozark-influenced restaurant, you're immediately struck by what it lacks as much as what it has. There are no washboards to be found, you won't see a moonshine jug or catch anyone wearing a kitschy handkerchief around the neck, and the soundtrack is decidedly banjo-free.

To carry out this delicate balancing act, Connoley enlisted the help of SPACE Architecture + Design, who brought to life a gorgeous, modern aesthetic. The restaurant is divided into two distinct spaces: The front room, comprised mostly of a square-shaped, sleek wooden bar with a handful of tables along one wall, blends a mid-century wood aesthetic with industrial elements. A few jugs of housemade kombucha and two small wooden barrels on the bar are the only overt winks to anything "Ozark," and even these touches are utilitarian, first.

A striking mural runs the entire length of the restaurant and ties together the front and back rooms. This staff-created art piece is comprised of colorful vertical paint drippings in shades inspired by wild persimmon. While the mural brings the spaces together, a floor-to-ceiling partition of light-colored wooden slats divides the front room from the tasting-menu area. The semi-visibility gives it an air of mystery that makes entry to the space seem almost ceremonial. 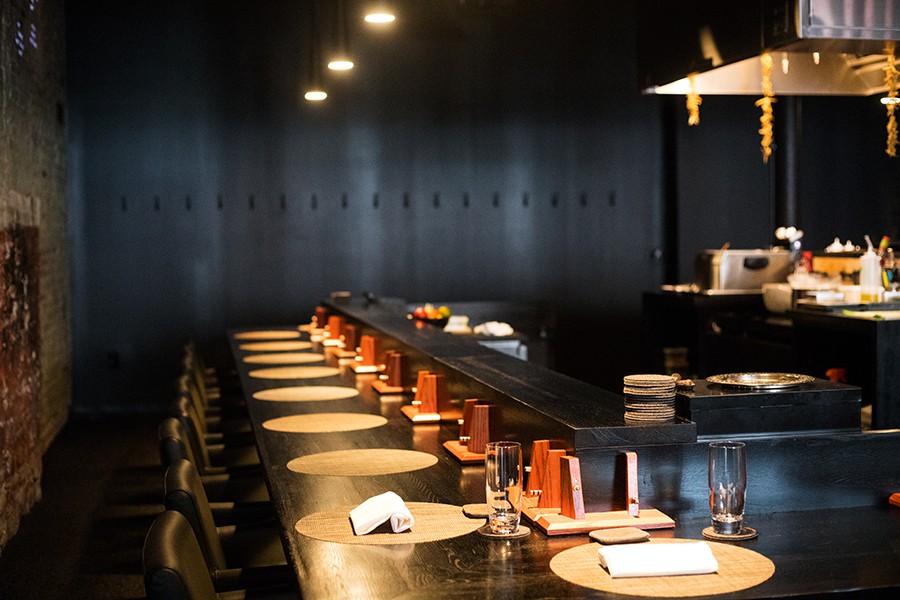 Guests enter the main dining space and are seated around Connoley and Bell's workspace and kitchen. The room is almost entirely done in black, save for the colorful orange-red pops, courtesy of wooden knife holders that are in front of each place setting. The room feels weighty, but this is immediately broken by the conversational way Connoley, Bell and their service team approach their guests. The result is a give-and-take, as the chefs explain courses and diners ask questions; it's more of a dinner-party feel than a stuffy tasting-menu experience, even if the strikingly modern room gives an impression of the latter.

Like the environs, Connoley did not intend Bulrush's food to be a literal exposition of old-timey Ozark cuisine. Instead, he and Bell have reimagined the dishes they came across in the research, applying techniques and ingredients that elevate the humble into the extraordinary. Consider cornbread, a "poor-people food" that is one of the staples of Ozark and Southern cooking. Here, Connoley and Bell fashion a circular cake from local grits and fry it, then pair the fritter with ramp aioli. The richness is cut with pickled cherry tomatoes, peach compote and a melon-pepper salsa to wipe away the oil from the fryer. The dish is elegant and comforting at the same time — a feeling that carries throughout the meal.

An oyster course might seem like a diversion from Ozark cuisine, but Connoley and Bell explain that they came across the shellfish throughout their research. In the 1800s Ozarks, canned oysters were once a cheap form of protein. My, how times have changed. Here, the chefs coat a tender oyster in cornmeal and just barely fry it; the texture is so soft it practically melts on the tongue. The oyster rests atop a bed of sauercorn, a fermented corn akin to sauerkraut and a silken corn soup that tastes like the sweet distilled essence of the vegetable. It's masterful.

Handpies appeared throughout their research as well, and here, Connoley shows off his pastry prowess in the form of a shockingly flaky shell that is basically a floury conduit for butter. The filling changes regularly; on one evening, the pie was filled with savory charred greens, their bitterness offset by apple cider aioli and cherry mostarda. On another night, the chefs took a sweet tack, stuffing the shell with squash jam and pairing it with apple cider aioli and pawpaw vinegar mustard. The result was a delicious, though sweet for a midcourse, throwback to the Squat Tarts at Connoley and Bell's now-shuttered Squatters Café.

And the show continues. On one evening, the meal begins with a fermented elderflower honey amazake that is encased inside a cattail pollen shell and paired with savory fermented blueberries and pickled cucumbers. The sphere bursts in the mouth, energizing the palate for what's to follow. On another visit, that same amazake is infused with redbud vinegar and served as an intermezzo between the savory and dessert courses, building a bridge between what's gone before and what is yet to come. Another successful course teases tomato confit, pickled cucumber and forage-spiced ricotta, and presents unexpectedly as a delightful cucumber tomato tea sandwich on freshly baked bread. The effect harkens to the sort of mid-afternoon snack you'd enjoy on your grandmother's covered porch.

Doughnuts and crullers were ubiquitous throughout 1820-1870 Ozark cooking, and Connoley and Bell interpret this in the form of a golf-ball-sized acorn doughnut that has more chew and heft than what is typical of the form. The doughnut is delightfully sticky with nocino (walnut liqueur) glaze and served atop velvety, white chocolate and potato mousse. Alone, it's a good dish, but what makes it positively transcendent is what happens before you even take a bite. Presented in a covered, acorn-shaped bowl, a puff of persimmon smoke is released the moment you remove the lid, infusing your senses with the memories of a campfire in the damp woods. It's intoxicating. 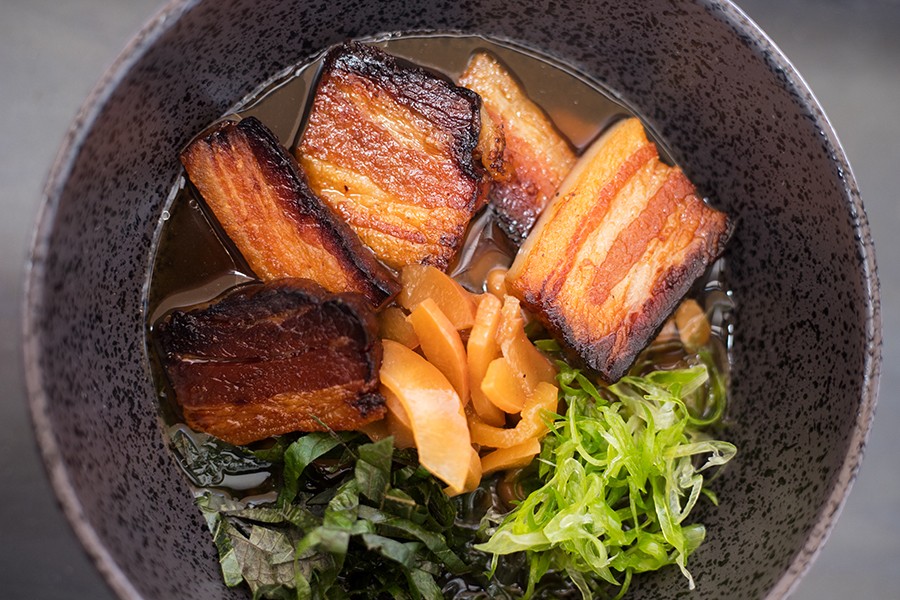 On both visits, Bulrush's only meat course was a fork-tender piece of braised pork cheek, accented with husk cherries. The pork was served alongside fermented wheat berries that popped in the mouth and gave the dish a toasty undercurrent.

Desserts are a strong suit for Connoley (who is also a chocolatier), and he shows off his baking skills in the form of a jaw-dropping acorn sable that tastes like a rustic, brown butter shortbread. Acorn meringue, oak essence, blackberries and berry milk crumb bob in a rich yogurt chantilly. Though presented as a showpiece, you could close your eyes and think you are eating an old-fashioned icebox pie in a great-aunt's kitchen. 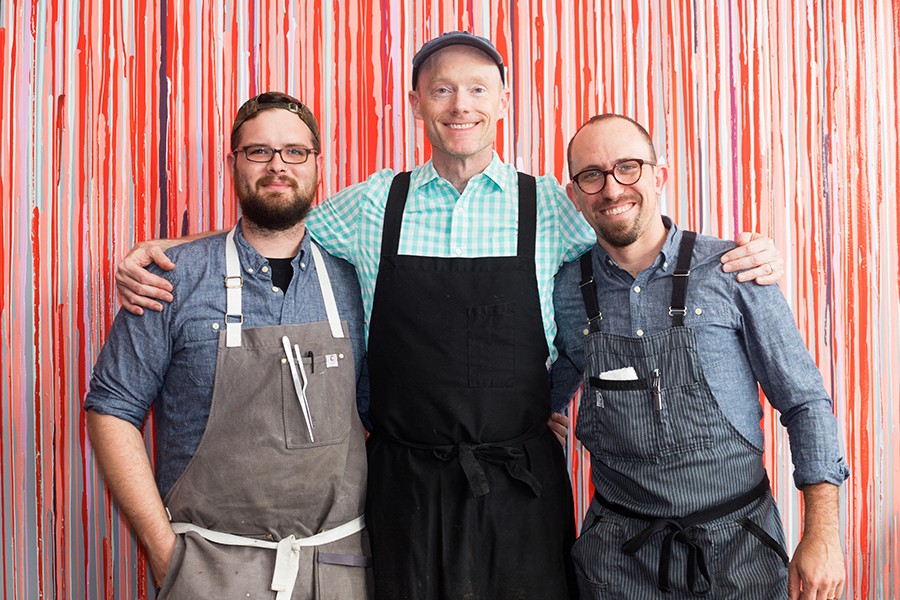 Connoley and Bell are trying to achieve those sorts of evocations, and on one occasion, they brought an 80-something man to tears. An Ozarkian from birth until present, he came to St. Louis with a family member to experience Bulrush's tasting menu and sat awestruck at how much a course of simple greens brought him back to his youth. Though not literal, Bulrush has clearly captured the essence of what Ozark cuisine means, at least to this man.

I do wonder how many folks like him will dine at Bulrush, however, and my only concern with this positively flawless place is that a fine-dining tasting experience like this — albeit, comparable to any other fine-dining experience at $100 inclusive of tax and gratuity — is likely inaccessible to the people its food represents. With a poverty rate nearly fifteen percentage points higher than the national average, can someone from the Ozarks actually experience an Ozark tasting menu in the city? I believe the answer is evident.

I am confident, however, that Connoley is conscious of this, as he sees Bulrush not simply as a restaurant, but an ongoing exploration of the ethical and moral issues that inevitably come up when we view food as more than fuel. Perhaps by placing this marginalized cuisine (of course, just one of many) into the spotlight, he is taking a first step of shining a light on it as an important part of our culinary heritage – of his and Bell's culinary heritage. After all, it's what inspired Bulrush's path in the first place.