Bull Run and the Everlasting Gobstopper

If Jay Farrar's titles don't have to make sense, then neither do ours 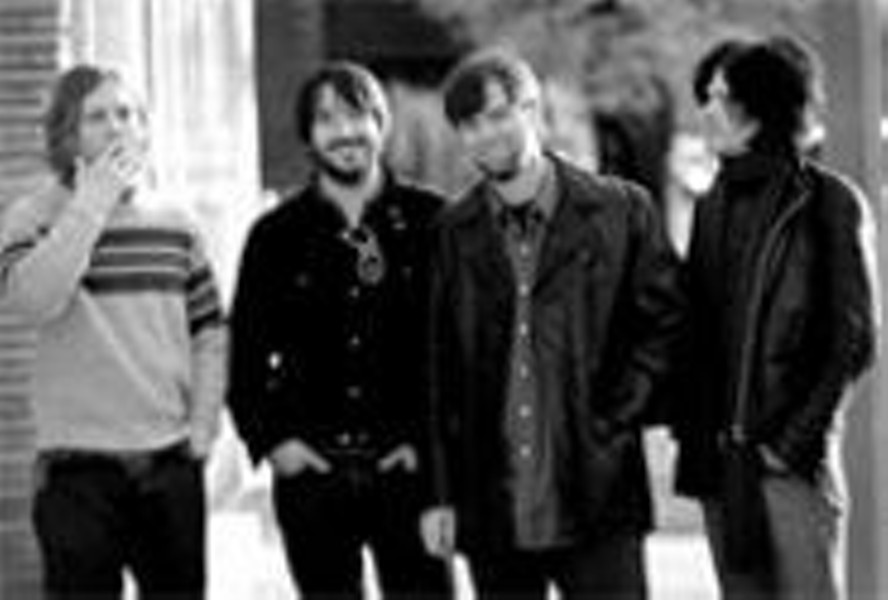 Turn, turn, turn...: That's all our Music Forensics Lab can think of when they see this mid-'80s photo of Be- Vision. While the band used to clean up in the New Wave category of the RFT's Music Awards, several of the fashion trends they sport have come full circle with the dance-punkers: Tighten up that leather suit, knot those scarves and make the floppy bangs more X- treme, and it's "hell-oo, the Bravery." We smell a comeback.
Son Volt, the band of the guy who once penned the lyric "what I'd give for that hat to be medicine," has a new album called Okemah and the Melody of Riot. This title sucks super-bad, for sure, but that's no surprise: Volt frontman Jay Farrar has named other albums Sebastopol, ThirdShiftGrottoSlack and Wide Swing Tremolo. The worst part about the new title is that it's so hard to understand why you hate it. B-Sides' shrink has been encouraging us to unearth the roots of our frustrations, so let's break this down:

When you begin reading the title, the first word you encounter is "Okemah." Person? Place? Dermatological disorder of some sort? Then you get to "and," which is no big deal, and then "the" -- which is also easy but hints at another confusing noun to follow. At "Melody" you take a deep sigh of relief, because this is music, right, so of course there's melody involved! "Of" makes you a little nervous, but it isn't until "Riot" that you lose it. The tradition of capitalizing important words in titles disguises whether "Riot" is a proper noun or just a plain-old common one. If "Riot" is the name Farrar gives to his fuchsia piccolo or something, then fine, but if "Riot" just means "riot," then when the hell did riot start having a melody? Or, wait, maybe Melody is the name of a woman? And, like, this guy Okemah knows a bunch of Melodys, but the one he's referring to here is the one from a town called Riot?

Fortunately there's always the last refuge of idiots, the Internet -- but even that doesn't explain it all. Okemah is the town in Oklahoma where Woody Guthrie was born, it turns out, but if you Google "Melody of Riot" all you get is a bunch of stupid references to the new Son Volt album. If B-Sides ever puts out an album, it's gonna be called Jay Farrar Turd Is. -- Ben Westhoff

What happens when one of the most successful performers in jazz over the past 40 years collaborates with a pop star young enough to be his son? St. Louis will find out on Wednesday, June 8, when pianist and composer Herbie Hancock brings the 2005 edition of his Headhunters to the Pageant. Several of Hancock's band members are well known to jazz fans, but there will be one new Headhunter who comes as something of a surprise: Grammy-winning singer, songwriter and guitarist John Mayer, who's already recorded with Hancock for the pianist's next album, Possibilities, due out this fall.

Because Hancock fans and Mayer devotees tend to inhabit different musical worlds, we've composed a little primer to help everyone get acquainted:

Pop listeners, meet Herbie: Hancock first earned fame playing ground-breaking modern jazz as a member of Miles Davis' classic '60s quintet. In the '70s, his electrified funk-jazz albums with the original Headhunters were critically acclaimed best-sellers that helped popularize the use of synthesizers in jazz. In the '80s, DJ collaboration and a memorable music video for "Rockit" earned him a whole new audience among the then-nascent MTV generation. Since then, Hancock has alternated between acoustic and electric projects, working with some of the best musicians of his generation and with younger players on the way up.

Songs you may have heard: "Maiden Voyage," "Cantaloupe Island" (famously sampled by '90s hip-hop group US3 on "Cantaloop") and "Chameleon."

Why collaborate? Cross-generational team-ups worked out very well both commercially and artistically for Carlos Santana and on the late Ray Charles' last album, Genius Loves Company. Hancock is as savvy about business as he is about music and likely hopes that Possibilities, which will also feature cameos from Trey Anastasio, Sting, Paul Simon, Annie Lennox and others, will get a similar response from critics and CD buyers.

Jazz fans, say hello to John: Mayer grew up in Connecticut digging the blues of Stevie Ray Vaughan, and he later attended Boston's Berklee College of Music, famous for training jazz players. After moving to Atlanta and self-releasing an EP, Mayer signed with Columbia, put out his first full album in 2000 and blew up in quadruple-platinum style.

Mayer's follow-up efforts have sold millions more and established him as a bankable writer/performer/doe-eyed heartthrob loved by females everywhere.

Songs you may have heard: "No Such Thing," "Your Body Is a Wonderland," "Clarity" and "Daughters."

Why collaborate? Pop audiences can be fickle, and Mayer already has plenty of money and fame. Working with Hancock and jamming live with blues veterans like Buddy Guy and B.B. King helps give Mayer musical credibility that should set him up for a long career no matter which way the pop winds blow next. -- Dean C. Minderman