MABEL SUEN You can pair your flight of cider with the house burger, cider-brined wings or the "Damascus Flatbread."

Russ John likes to tell the story of the two bottles of cider he has stashed at his apple orchard in southeastern Nebraska. Made during Prohibition by his great-grandfather, they would surely be vinegar if he cracked them open, but drinking them is not the point. Instead, they sit as a reminder not only of his family's cider-making legacy but of what the beverage once was and could again be.

That spirit animates Brick River Cider, the ciderworks, tasting room and restaurant John opened in February. Though it is John's first restaurant, he is no stranger to business, having achieved success in everything from consulting to children's retail. When his wife, Sharon Price John, was hired in 2013 as president and CEO of Build-a-Bear Workshop, John moved from Boston to St. Louis, continuing to run his toy company while doing some consulting for a local venture-capital firm.

Cider, however, was in John's blood, and he could not shake the feeling that he wanted to do something to honor that legacy. Living in the Midwest, he was much closer to his family's 150-year-old Nebraska orchard. That connection inspired him to pursue his passion.

Still, his cidery didn't happen overnight. A consummate strategist, John spent four years analyzing the market before he committed to taking the leap. His research uncovered an industry poised for a comeback, one that had a storied history and even outshone beer in the pre-Prohibition days. It was only when militant teetotalers burned to the ground most of the country's hard cider orchards in those dark, alcohol-free days of the 1920s and early '30s that the industry screeched to a halt. It proved unable to recover. 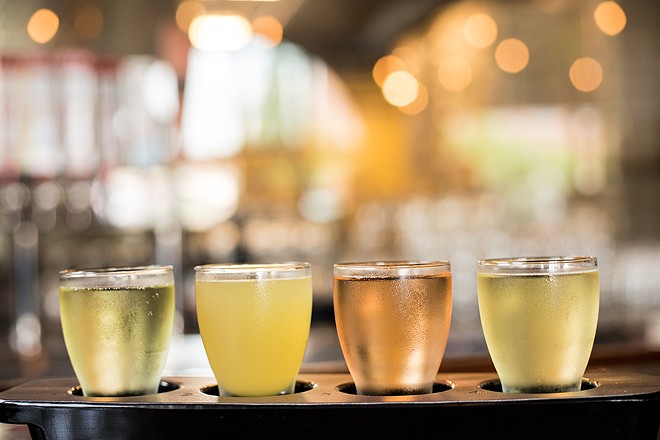 Beer did recover. It replaced hard cider as the country's beverage of choice, a phenomenon that ultimately led to the craft-beer explosion of the last few decades. John, like many entrepreneurs on the coasts, sees cider as following that same path, especially as speculation grows that the craft-beer industry has become oversaturated. These entrepreneurs see cider as an opportunity to provide something equally artisanal but decidedly different.

After deciding to take the leap in 2017, John scoured the city for the right location to open Brick River Cider's production facility and tasting room. He found it in an old firehouse just west of downtown — a massive, two-story building that took nearly a year to renovate. The space is stunning, its most striking feature the large, refurbished garage doors that give an indoor-outdoor feel to the downstairs tasting room. White vintage tile covers the walls, the bar sits to the back, and a mix of wooden communal and high-top tables provide seating. On one of those rare, cool summer evenings, a gentle breeze fills the room, making it one of the more attractive places in town to enjoy a beverage. 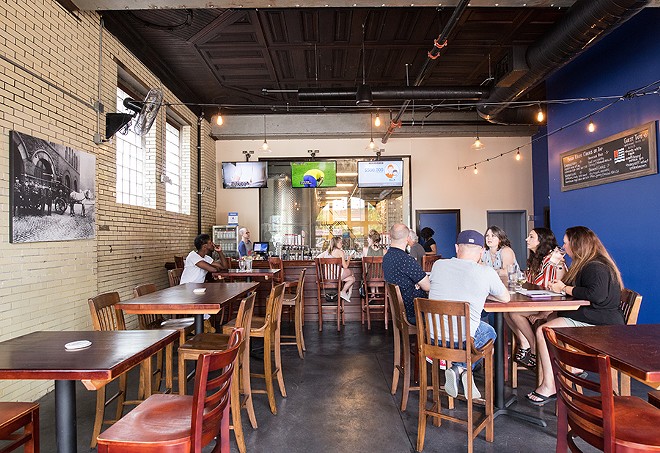 The attractive downstairs space feels complete on its own, but it's not the full package. Upstairs is a vast, open room filled with tables and historical photographs of the city's brick-making heyday (the inspiration for Brick River's name). It's also the site of the kitchen, from which the cidery serves a simple menu of sharable plates, sandwiches and salads. Developed by chef consultant Chris Lee and currently executed by kitchen manager Samantha Lauer, the menu is a refined take on American pub fare meant to complement the real star of the show, the cider.

Usually, it does that well, as in the case of the "Damascus Flatbread," a rustic, crispy-edged crust bejeweled with candied apricots and spice walnuts. The sweet stone fruit cuts through the funk of the accompanying goat cheese for an appetizer that is every bit as bright as what's being served on tap.

The Brussels sprouts salad is another standout, not so much because it breaks any molds but because of how well its flavors embody the tart, refreshing spirit of cider. The sprouts are shaved thin and accented with pickled cranberries that almost pop with juice when bitten into. Candied pecans and coriander vinaigrette add spice and crunch to an excellent offering.

Brick River's burger is solid, consisting of two smashed patties that have a pleasant, crispy seared coating. Melted cheddar seals the patties, which are cradled in a pillow-soft brioche bun. It's as quintessentially American as apple pie — or cider.

The kitchen does Italian-inspired fare just as well. Mushroom risotto may be the cidery's best offering, a flawless concoction of Arborio rice, peas and mushrooms that is a master class in the rice dish. The risotto is creamy but has texture, and little flecks of scallions, garlic and shallots provide pops of mouthwatering flavor. You'd be pleased if you were served this at an upscale Italian restaurant. 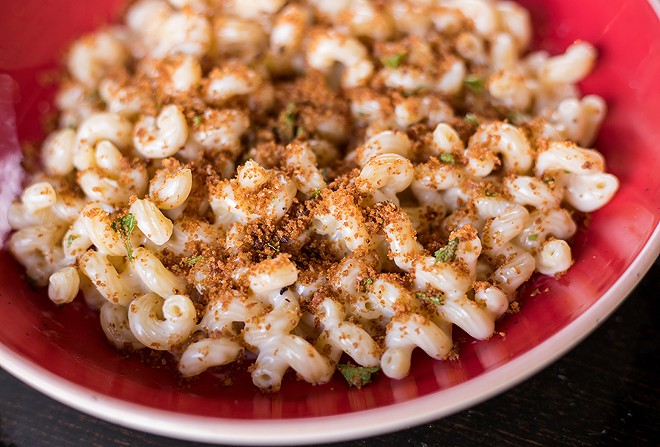 Grilled cheese, dressed with truffle oil, mushrooms, spinach, gruyere, fontina and brie, is a sophisticated, all-grown-up take on a classic. Cider-braised pork shoulder on grilled rustic bread is tender and juicy. It was dressed with mushrooms and spinach, though these did not provide enough sweetness or oomph. It was good enough, but with a sauce or sweet condiment, it could be a standout.

The "French Onion Chicken" sandwich has a similar issue. The flavors, as they stand, are excellent: Gruyere and sherry-caramelized onions are slathered atop grilled chicken, infusing the sandwich with sweetness and earth. I wanted more, though. Even with a basil-garlic remoulade coating the bread, the sandwich begged for more of that wonderful onion concoction. Give me a double scoop, and this might be my go-to order. 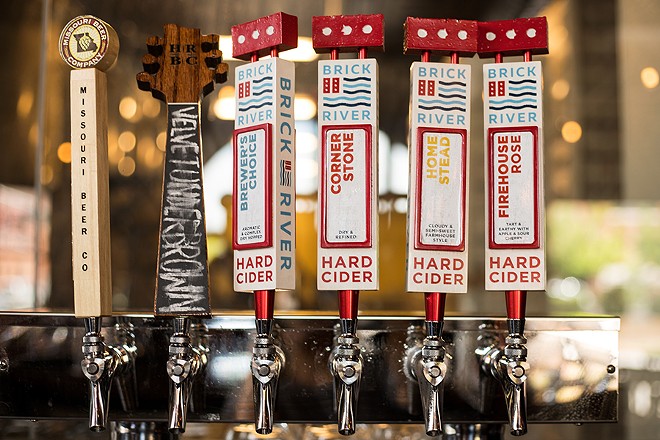 Give me Brick River's cauliflower risotto, however, and I might not notice anything else on the table. This luxurious side dish substitutes the vegetable for rice without skipping a beat, retaining a slightly crunchy texture. Diced sun-dried tomatoes and scallions cut through the richness and infuse every bite with their flavor. Forget cider; John could rebrand as Brick River Risotto Works without skipping a beat.

But then we would miss out on the exciting beverages that are Brick River's true raison d'etre. Four options are currently on offer, the "Homestead" and "Cornerstone" serving as flagships. The former is a tart, cloudy farmhouse-style cider evocative of an apple-kissed unlfiltered wheat beer; the latter a dry, effervescent beverage that is an embodiment of craft cider.

My favorites, however, were the two limited-edition ciders on tap. A hibiscus- and sour-cherry-infused rose-style cider could have doubled for a dry, sparkling rose wine, while the dry-hopped "Brewer's Choice" is shocking in its ability to mimic a citrusy IPA. Head cider-maker Evan Hiatt has clearly found the winning formulas.

John has as well. A businessman at heart, he clearly has his finger on the pulse of an industry that is on the cusp of exploding in this craft-beverage-loving city. But what makes Brick River so special is less about him seeing a potentially lucrative opportunity and more that he's seized it in a way that honors his family. Even if he never cracks open those bottles of cider, you can taste his great-grandfather's legacy in what he has put together at Brick River Cider — and even though the cider may be off-dry, nothing tastes sweeter than that.