Bowled Flavors: Can Bocci Bar separate itself from the Italian-restaurant pack? 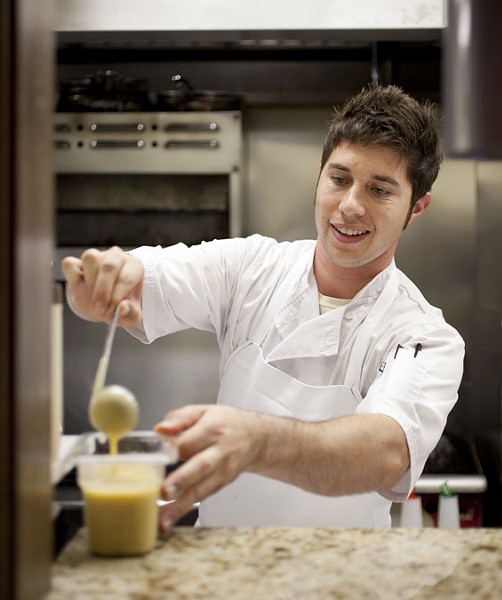 Bowled Flavors: Can Bocci Bar separate itself from the Italian-restaurant pack?

At first glance the suppli al telefono might be the most intriguing dish at Bocci Bar. You don't need to understand Italian to deduce that a telephone is involved. And even if you do parla a little italiano, the name might pique your curiosity. Translated literally, it means "croquettes on the phone."

Something has been lost in that translation.

The menu translates the suppli al telefono as "cheese-stuffed rice balls." That's certainly descriptive. In fact, it sounds like arancini, and what arrives at your table looks just like arancini: a trio of golden-brown fritters, each as big as a toddler's fist, served with a marinara sauce. Pull one in half and strands of melted mozzarella stretch from one piece to the other. Remind you of anything? Once upon a time the sight inspired an Italian with a vivid imagination to name a dish after telephone lines.

Suppli al telefono is more evocative than arancini, but this is still essentially the same dish, carrying with it the same pleasures: The crunch of the exterior yields to al dente arborio rice, which in turn yields to molten cheese. Tasty, but not, at its core, uncommon.

Bocci Bar opened in April, yet another restaurant from the prolific Schmitz clan — specifically Frank Schmitz, who owns the popular BARcelona on this same Clayton block, and who, along with his sister, Ellen, runs Coastal Bistro & Bar (formerly known as Mosaic Bistro Market) next door to Bocci Bar. (A third Schmitz sibling, Claus, heads the Mosaic restaurant trio: the original location downtown, as well as the offshoots at the airport and in Des Peres.)

Though its name might conjure the image of a cozy spot on the Hill where old men sip grappa and the smoking ban is cheerfully ignored, Bocci Bar is a thoroughly contemporary restaurant, with a sleek stone bar top and gleaming hardwood floors, and has nothing whatsoever to do with the venerable Italian pastime most commonly spelled bocce. The space is long and airy, with dining tables at the front and back and a bar area in between. In pleasant weather a seat at the front, near the open windows, is the place to be.

The menu is lengthy — antipasti, soups and salads, pizzas and flatbreads, pastas, entrées, contorni (à la carte vegetable sides) and desserts. Aside from the suppli al telefono, the antipasti are all dishes you've encountered — and likely eaten — before. There is the ubiquitous fried calamari, served here as a fritto misto augmented by rock shrimp, arugula and thick slices of fennel. The squid was on the chewy side, but the shrimp were plump and sweet, and the fennel was a smart, autumnal touch.

The meatball, another antipasto, is made from veal, lamb and Italian sausage. The lamb, especially, gives Bocci's specimen a more sophisticated flavor than the meatballs one typically encounters — so much so that it made me wish the kitchen had done more than simply plop it into a bright, fresh tomato sauce. On the lunch menu — a condensed version of the dinner menu, plus sandwiches — smaller versions of this meatball are given the tomato-sauce treatment and then, helped along by slices of mozzarella, made into a sandwich. Bocci calls it a polpetta. I call it a meatball sandwich. Either way, it's very good.

The addition of lamb to the meatball's standard-issue ground beef and pork is a surprise. It works. You also might raise your eyebrows at the selection of pizzas. At Bocci the crust is thin, somewhat in the Neapolitan style, though it's missing the char and character that can only be imparted by high, wood-burning heat. There's one pie made with sausage and mozzarella, but beyond that all the toppings are unconventional. The "Lobster B.L.T." is adorned with lobster meat and bits of applewood-smoked bacon, along with arugula and créme fraiche. This is a flavorful and surprisingly light pizza, the buttery sweetness of the lobster nicely contrasted by the peppery arugula and smoky bacon. Amazingly, the lobster meat has the perfect texture, neither over- nor undercooked.

As with much of the menu, the pastas will be familiar to restaurantgoers who have ascended past the red-sauce/white-sauce rung on the ladder of Italian-American food sophistication: a Bolognese sauce (made with a combination of veal, pork and lamb, like the meatball); rigatoni with sausage, fennel, leeks and Fontina cheese; floppy ravioli fat with four cheeses.

The spaghetti carbonara features house-made noodles tossed with eggs and hunks of pancetta. It's a divine trinity, but the kitchen needlessly complicates the dish by adding baby portobello mushrooms, asparagus and Swiss chard. One of these bonus components alone might have worked, but together they swamp the sublime simplicity that makes spaghetti carbonara a bona fide classic.

Halibut braised in white wine, one of the secondi, is served with baby carrots, zucchini and patty-pan squash in a sauce of white wine and butter. It is gorgeous on the plate, but disappointingly flat on the palate. The halibut was seared briefly before its braising, and its light brown crust gives the dish a little brawn, but this is as meek as a $26 entrée can be: tender, mild fish, white wine, butter. The vegetables, cooked a shade past al dente and coated in the white wine-butter sauce transmit the fleeting sweetness of summer's end — the plate's sole stab at culinary epiphany.

An entrée of veal scaloppini brings three pieces of pounded veal dredged in flour and then sautéed, topped with peas and green onions and a thin, bland brown sauce. The meat itself was expertly prepared, the exterior just crisped, the interior ideally yielding, and I liked the sharpness of the onion and the sweetness of the peas. But the sauce, unfortunate and unnecessary, did in the dish.

Service is professional, if occasionally distracted. On one visit we were served the wrong antipasto; the restaurant gave us that one on the house and hurried the correct one to our table. More ungraceful was a cup of acquacotta, a tomato-based soup highlighted by a poached egg. The soup came to the table lukewarm, the egg itself cold. This dish never should have been allowed out of the kitchen.

This acquacotta was especially disappointing, because unlike the suppli al telefono, here was a dish the likes of which I'd never seen. Its inclusion on the menu, and small inspirations like adding lamb to meatballs or aiming to amp up a carbonara, suggest that this is a restaurant that could bring something different to our crowded and homogeneous restaurant scene.

As it was, though, I left Bocci Bar with no indelible impression other than the vague sense that I'd been here before, or if not here, then someplace almost exactly like this, only with a slightly different name.