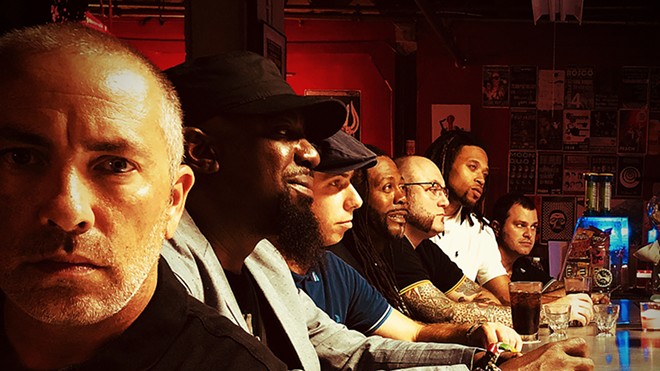 St. Louis music historians and armchair theorists will remind anyone in earshot of the city's contributions to the canon — as a birthplace of the blues, a cradle of jazz, even a crucible for alt-country. But amid the big names and major movements, St. Louis' contribution to the rise of ska's third wave (coming after its Jamaican roots and its British resurgence) is often overlooked.

Starting in the early 1990s, bands including MU330, the Urge and more kept the zippy, danceable style alive and well. Now-closed venues like the Hi-Pointe and the Creepy Crawl dependably booked some horn-addled variant of ska, whether infused with its reggae-derived origins or dosed with dashes of SoCal punk.

So there was more than a touch of recognition locally when Boomtown United, a loud-and-proud ska band, debuted a few years ago. Ted Leo once asked, "Where have all the rude boys gone?" In St. Louis, at least, most of them joined reggae bands, patiently biding their time until ska made its return.

According to lead vocalist Kevin Griffin, Boomtown United was the brainchild of tenor saxophonist Mike Powers. The two had played together in the reggae band Unifiyah; Powers also did time in the long-running Murder City Players. While living in San Francisco, Powers played with a ska band and came home eager to revive the sound in St. Louis.

"Mike, being a skinhead, has always been into ska," Griffin says. Powers and guitarist Jimmy Hogenmiller had been in the Kickbacks and the Hubcaps, two local ska bands. And all of the Boomtown crew had its foot in some branch of Jamaican music. But by 2017, pure ska — pork-pie hats, checkerboard patterns, skanking dance moves — was all but dead.

"There wasn't any ska happening here, at all," Griffin recalls of that time, noting that the group seeks to maintain the purity of the form. "We're playing only ska; there's no punk or rock in it."

The initial intent was to be a covers act — to resurrect some 2 Tone classics for nostalgic crowds — but that plan was quickly scuttled. "After a few covers in our first practice we started doing something original I had written," Griffin says. "From there, we never thought of doing covers again."

Griffin's own ska awakening didn't stem from those old Specials and English Beat records, but from a legendary local band. "For me personally, I got into ska through the Urge," he says. "Growing up, it was in '91 or '92, and from that moment on I was hooked. There was just something about the horns."

It took a few decades, but Griffin's fandom paid off when Boomtown United opened for the Urge on a few occasions. The band has also opened for second-wave legends the English Beat and finds itself on a lot of ska-related bills around town. Each show, Griffin says, brings new fans into the fold.

"The whole thing at a ska show is skanking — no more standing around. If you go to a Boomtown show, be prepared to dance," Griffin says. "The music is infectious enough that the crowd gets into it, and it fuels you to make you want to do it every night."

Catch Boomtown United at Atomic Cowboy at 8 p.m. on Friday, June 21. See our complete guide to ShowcaseSTL for more details.