Bong Joon-ho's Okja Is Charming, But Could Have Been More

(C) NETFLIX Mija (Ahn Seo-hyun) and Okja enjoy a pastoral existence in the mountains of Korea.

Bong Joon-ho's Okja can be called a lot of things, but dull isn't one of them. It moves like a theme-park ride, and while there may be fleeting glimpses of interesting things going by, it's the movement that matters. Though it brushes past a few serious subjects — commercial meat production, for one — the decision not to rest on any of them for very long appears to be deliberate. It's a fantasy/action film that raises heavy issues but refuses to take them too seriously.

The hero and title character of Okja is a gigantic pig, roughly the size of a bus. She's been developed through genetic engineering and left in the care of Mija (Ahn Seo-hyun), a young girl living in the mountains of Korea. Created as part of a campaign by the ubiquitous Mirando Corporation to burnish its eco-friendly image, Okja's decade of free-range living comes to an end when she is whisked off to New York to compete against other animals for the title of World's Greatest Superpig — and, eventually, to be repackaged as food in the Mirando slaughterhouse.

Trying to hold on to her gargantuan friend, Mija is challenged by a stream of eccentric characters who want to exploit, rescue or cook the pig, including the dogmatic Animal Liberation Front headed by Paul Dano; Dr. Johnny (Jake Gyllenhaal), a washed-up television star/zoologist; and the rival Mirando siblings (both played by Tilda Swinton), the good cop/bad cop duo of the genetic engineering world.

On the surface, Okja is a post-E.T. story of a child and her non-human friend, with many playful scenes of Mija frolicking in nature with her giant companion. The CGI animal doesn't have much of a personality, but Bong compensates by filling the screen with animated acrobatics inspired by the films of Japan's Studio Ghibli.

In these scenes and for much of its 118 minutes, Okja appears to be little more than a well-made family film, albeit one with language that used to earn an automatic R rating. (Netflix has opted for a self-imposed TV-MA rating rather than submitting the film to the MPAA.) Young viewers are likely to love Mija and her pig, but what will they make off the rest of the film, which lurches back and forth from broad comedy to grim ethical arguments? 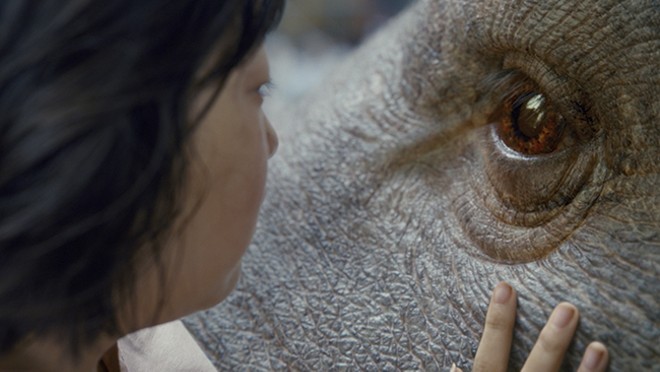 Bong's last creation, Snowpiercer, was an erratic, race-against-the-clock action film that occasionally came to a halt to introduce leaden, cartoonish villains. Okja goes in so many directions that it makes Snowpiercer seem almost relaxingly monotonous. When they're not safely reworking the Spielbergian fantasy model, Bong and co-writer Jon Ronson fire satirical pellets in every direction, although it's sometimes hard to tell what — if anything — their target is. GMOs? Corporate image-building? Steve Irwin imitators? Additionally, this is the second film released this year to use John Denver's "Annie's Song" in what I'm assuming is intended as irony. Even if I understood exactly what was ironic about it, that's still two times too many.

The makers of Okja may have wanted to use their fantastic animated creature to sugarcoat a serious attack on bio-engineering or global capitalism, but somehow things got out of balance, and the already fuzzy message got lost in the child-friendly packaging. But though their serious intentions were simplified into weak caricatures, the central element — a girl and her pig — retains its innocent charm. Okja is a frequently charming fantasy film that distractingly keeps trying to be something bigger.