Bockman Returns with Kid, Its First Release In Several Years 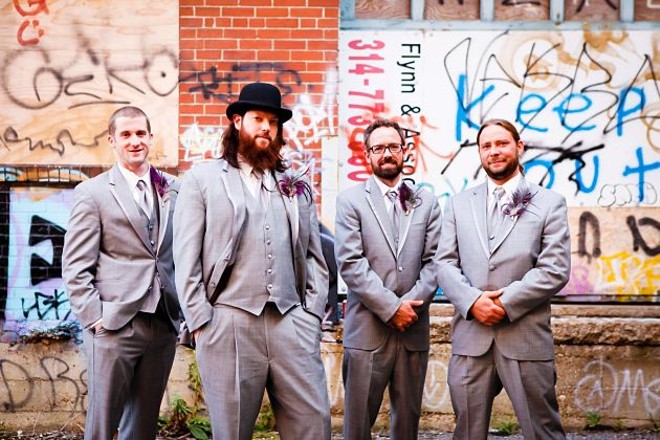 Late in the evening on Saturday, April 29, Sean Canan celebrated his 38th birthday by honoring the life and work of one of his musical heroes, Prince Rogers Nelson. As befitting Prince's outsize persona and peerless songbook, this was no casual affair; Canan and his Voodoo Players, a rotating lineup of local folk and rock musicians, swelled to eleven members on Atomic Cowboy's cramped Bootleg stage.

Reached by phone a few days later, Canan is off stage and in dad mode; he has just successfully gotten his two-and-a-half year-old daughter and year-old son down for naps. The Saturday night show was a special occasion, he says, and not just for his birthday. He normally holds his Voodoo Players residencies on Wednesday nights at the Broadway Oyster Bar, but the Prince set demanded something a little extra — both in execution and rehearsal.

"For the usual Voodoo show, I rehearse the band two times," Canan says, noting that Prince's varied, technically deft songwriting required some heavier lifting than the group's usual, more rock-centric tributes to acts like Paul Simon or Jimi Hendrix. "We ended up doing three rehearsals, but they were four or five hours each."

In addition to his Wednesday night gigs, Canan also holds down the stage each Sunday at McGurk's with Joe Stickley and their outfit Falling Fences. In the past few years, Canan has been able to rely solely on his live-music revenue to make a living.

"St. Louis is an incredible music scene, and there's enough demand for live music that I have been able to afford to survive off my gig money," says Canan. "It's like any other job — you gotta play 40 hours a week to make it happen."

Given his full calendar and regular paying gigs, it's only slightly odd that Canan would devote time and energy to a passion project, one with limited live-performance potential but one especially close to his heart. As a member of the Columbia, Missouri-based quartet Bockman, Canan has released a seven-song album called Kid, the group's first in several years.

Bockman has its roots in Bockman's Euphio, a five-piece jam band that Canan and his bandmates started as Mizzou students in 1999. After some highs (regional acclaim and coast-to-coast touring) and lows (band debt), the group decided to do a hard reset about ten years ago. These days, Bockman comprises guitarist and vocalist Canan, bassist and vocalist Wil Reeves, drummer Danny Carroll and keyboardist Andrew Weir. Traces of the band's jammy, noodley roots are all but scrubbed from Kid, which favors a more spacey and atmospheric palette while pushing the energy and movement of the songs forward.

Owing in part to having members in different cities, as well as shifting priorities toward careers and families, the members of Bockman had to record Kid piecemeal — a relative hardship made easier because Reeves owns and operates a professional studio, Centro Cellar.

"We had been working on it for a long time," Canan recalls. "Several of the songs, I finished the guitar tracks three years ago, but the guys said that the songs weren't weird enough. All those dreamy segues — we jokingly call it Tweedy noise, whatever weird sounds on top of the music — we had the basic songs down years ago, but Andrew and Wil put on some headphones-y twinkly stuff."

The reference to Wilco's Jeff Tweedy underlines a key component that led the band away from its jam band beginnings; Canan recalls when the bandmates lived together and would marvel at the exploratory pop songwriting on albums like Yankee Hotel Foxtrot and the Flaming Lips' The Soft Bulletin. On Kid, a song like "Terra the Bella" doesn't need many tricks to sweep up the listener in its energy, just a propulsive rhythm and a big-hearted approach to harmony that pushes the song toward catharsis and crescendo.

Canan credits Reeves for taking a larger measure of creative control in the group — both writing and singing. "I bring a song in, but by the time it's finished it's a completely different song," says Canan. "I always have faith in those guys; they are always able to add to it and make it more interesting."

For Canan, who pays the bills by covering other people's songs, Bockman provides a different kind of creative outlet — one that has him fantasizing about a famously tour-averse studio band.

"Can we just be like Steely Dan and release cool records and not play any shows?" Canan says with a laugh.

While the band won't be anywhere near as active as his other acts, Canan has hopes for more Bockman activity this summer, perhaps even a Flaming Lips-centric set during one of his Voodoo Players nights.

"Nothing breathes life back into a band like a new album."