BoBQ Turns Up the Heat

BoBQ's kimchi is perfection of the form — a generously sized portion of cabbage, fermented to the point that its flesh begins to break down so that it releases a wonderful, earthy funk. Through some feat of magic, the cabbage retains just enough of its crispness, even after it is saturated in a vibrant orange-red chili sauce that is spicy enough to tingle the tongue but balanced with the pungent brine to soften its punch. It's fiery, refreshing, visually stunning and takes two days to make.

That such a time-intensive delight comes at this accessible price is the reason BoBQ exists at all. Owned by husband-and-wife team Victor Jang and Moon Kim, the tiny storefront is their answer to what they saw as a dearth of Korean restaurants in St. Louis — at least ones providing a quick and inexpensive window into the country's rich culinary offerings.

This is the second time in three years that Jang and Kim have sought to add more Korean fare to St. Louis' food scene: In 2016, the pair opened the Korean barbecue hot spot Wudon in Creve Coeur to roaring success. Their stellar reputation is anchored by the high-quality Korean barbecue meats that are cooked atop individual grills on the table, right in front of (and in most cases, by) guests.

Though admittedly not the first — and certainly not the only — Korean restaurant in town, the one thing Jang and Kim couldn't help but notice was the area's shortage of grab-and-go Korean food compared to other cities they've lived in. They knew they had a good product: After all, many of their dishes were created from Kim's family recipes passed down through generations. However, the fact that diners had to commit themselves to a three-hour meal and an upscale price tag meant they were missing a chance to bring their food to a broader audience.

Their customers, many of them students at Washington University, told them as much and begged for them to open something low-key and close to the school so that they could experience their cooking on a regular basis. Jang and Kim would get the opportunity to do just that in the form of a tiny storefront on a side street in the Delmar Loop.

The pair snatched up the property after its former tenant, Schwarma King, vacated, and got to work transforming the spot into a stylish, quick-serve restaurant with an open kitchen, a stone-fronted order counter and a handful of gray metal tables and chairs for guests who choose to dine in. Like Wudon, the walls are painted black and covered in Kim's unique, pop-art murals with cartoon-style chalk drawings of animals and eye-catching phrases such as "Wow" and "Bam" emblazoned in large letters.

In addition to the aesthetic changes, Jang and Kim realized they needed to tweak their dishes for the fast-casual platform. Though the flavors would be the same, they needed to make sure their food would travel well and still be good even if someone didn't sit down to eat a dish until 30 minutes after it was prepared. Jang obsessed over every last detail — extra sesame oil on the rice to keep it from getting sticky, extra sauce on the barbecue to prevent it from drying out, griddling the meat for a precise amount of time to mimic the Korean barbecue experience — and after several months, he and his wife were prepared to roll out their wares to their eager customers.

BoBQ opened quietly in March but did not celebrate its grand opening until June in order for Jang and Kim to get their bearings about them. It's also the reason that BoBQ has such a small menu; serving just four different bowls, one variety of dumplings and a soup, the selection is rather limited. However, what it lacks in breadth, it makes up for in some of the best Korean food — if not some of the best fast-casual food, period — in town.

On the surface, BoBQ's bowls are straightforward: white rice, grilled onions, shredded romaine lettuce and some meat or tofu. However, all it takes is one bite of the spicy pork bowl to understand how much quality and flavor can be packed into a seemingly simple fast-casual entree. Jang's insistence on getting the rice just right results in a fluffy, semi-sticky texture slicked with rich sesame oil. It serves as the base for the succulent sliced pork, which has been marinated in a fiery, garlic-laden gochujang barbecue sauce that caramelizes onto the meat when cooked. The pork's rendered fat and the sauce mingle together, forming a spicy-savory concoction that soaks into the rice; accents of grilled onions and red bell pepper add subtle sweetness to this magnificent dish.

The chicken, while not as rich as the pork, is another worthy offering. Jang and Kim use the same sauce that is on the pork, and it plays well here, giving the chicken not only flavor but a buffer against drying out. The little bits of caramelized sauce form a glaze over the meat, like a Korean version of a Buffalo chicken tender.

BoBQ's tofu is also impressive, especially its texture. Inside, the cubes are as creamy as custard while the exterior crisps up when cooked to form a crunchy shell. Unlike the pork or chicken, the tofu does not come sauced, but rather is served with a side of a delicate soy-chili sauce that lightly coats the entire dish in spice.

The bulgogi bowl, however, is the restaurant's calling card, a subtly sweet, garlicky, soy-kissed mound of sliced beef so wonderful it will haunt you from your last bite until your return visit. Jang and Kim's version of the Korean barbecue staple is based on an old family recipe that uses apples, honey and Asian pears in addition to the standard soy, garlic and chiles. The result is a more complex, brighter sweetness that, when cooked on the griddle, crystallizes around the meat, forming a mouthwatering coating of sweetness, salt and umami. The marinade seeps into the rice and mixes with grilled onions, forming an utterly magnificent sauce that is worth far more than its $8.99 price tag. 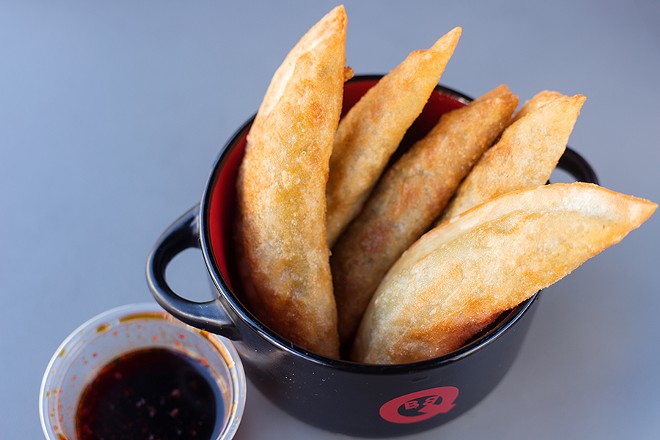 Aside from the bowls, BoBQ offers a simple tofu soup and wonderful fried vegetarian dumplings. The latter are half-moon shaped and filled with cabbage, tofu and jalapeños; the contents are so rich and satisfying, my vegetarian friend had to ask twice whether or not they were filled with pork.

BoBQ gets busy, and my only issue with this otherwise flawless restaurant is how smoky it can become when the place gets hopping. It's typical of the genre for sure; anyone who has had the pleasure of going to a Korean barbecue restaurant knows that you come out smelling of grilled beef and garlic. Personally, I think of it as a badge of honor. For less than $10, you get not just dinner, but also a most exquisite perfume that will make you the envy of anyone who smells it. If that's not a value, what is?