Black Panther Is a the Biggest, Boldest Comic Book Movie of Them All

The small nation of Wakanda is a protected valley enclave in east Africa, hidden from outside eyes by some very advanced technology fueled by the alien metal vibranium, which arrived via asteroid millennia ago. As Prince T'Challa — whom we last saw in Captain America: Civil War as the superpowered Black Panther — arrives home for his coronation as Wakanda's new king, he sighs with joy: "This never gets old."

He means the descent by air through a false rain forest canopy and down among the skyline of the nation's central city. We're seeing it for the first time ... and, my fellow nerds, let me tell you: I cried. The rest of the planet believes Wakanda to be a backward country of subsistence farmers, but it is the most advanced nation on Earth.

That beautiful skyline, an architectural wonder of uniquely African design, is but the first taste of Black Panther's gorgeous vision of what humanity might achieve, a society dedicated to science and peaceful progress, to equality between all. And the fictional, fantastical Wakanda is also a harsh condemnation of reality: Imagine if Africa hadn't been subjected to brutal colonialism, its resources and even its people stolen and exploited for the profit of others. How much have we lost? How much human potential has been squandered?

Comic books are often power fantasies, and Black Panther is the biggest, boldest one yet to make the transition to movies. This is a pulp-fiction dream to move and inspire not merely lonely or unappreciated individuals but entire cultures, entire peoples. I know that I, as a white person, cannot truly imagine what it must be like to be a black person looking at Black Panther and feeling the pride and possibility that it represents ... but I think I feel some of that.

Black Panther is a profoundly, powerfully badass exploration of all the things we love about comic book stories. The discoveries T'Challa (Chadwick Boseman) makes about his family involve secrets and betrayals and abandonments; it's all positively Shakespearean. The personal challenge that comes with that is connected to the dilemma T'Challa is facing now that Wakanda has taken an inadvertent step onto the world stage after having kept itself isolated. 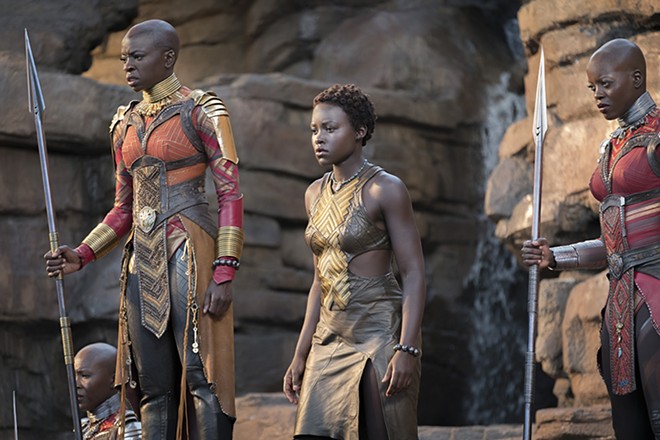 Nakia (Lupita Nyong'o), spy and foreign operative for Wakanda, is eager to use the nation's resources to help outsiders. But T'Challa's confidante W'Kabi (Daniel Kaluuya) worries about Wakanda being overrun with refugees. In the middle is T'Challa's genius little sister, Shuri (Letitia Wright), who is responsible for much of Wakanda's high tech; she doesn't seem to have much in the way of political opinions, but her toys are what make possible much of what Wakanda has to offer the world.

This is all classic comic-book stuff, the ultimate quandary about great power and the great responsibility that comes with it. This dilemma began to be played out on the world stage in Civil War. But Black Panther ups the ante tremendously: Here is an entire government, an entire nation that is superpowered, thanks to the literal mountain of vibranium it sits atop, and isn't quite sure what using it responsibly means yet. There are so many ways in which this movie qualifies as like nothing we've ever seen before, all of which are functions of the widening of perspective it represents. This, though, is a really important one: It ponders questions of responsibility on a collective cultural level, not just an individual one. How do we use our shared power for everyone's benefit?

But if you must, you can ignore everything else about Black Panther and just enjoy it as spectacle. Director Ryan Coogler, who wrote the script with Joe Robert Cole, does a magnificent job with the action fantasy. At its heart, Black Panther has a fairly standard comic book sort of story. Baddie Ulysses Klaue (Andy Serkis), one of the few outsiders who knows the secrets of Wakanda, stole a small quantity of vibranium decades ago. He's up to no good again. He must be stopped by T'Challa, Nakia and the absolute force of nature General Okoye (Danai Gurira), with an assist from CIA agent Everett K Ross (Martin Freeman). Their first big punch-up, at a secret casino nightclub in Busan, South Korea, is a wonder of thrillingly kinetic action, a stunningly choreographed, seemingly uncut sequence that ranges all over a big space on multiple levels.

And the movie only gets more viscerally exciting from there. But it'd be a genuine shame to ignore all the intellectual excitement on offer and see only this.