Bite at the Museum: The Missouri History Museum exhibits a trove of lunches and brunches 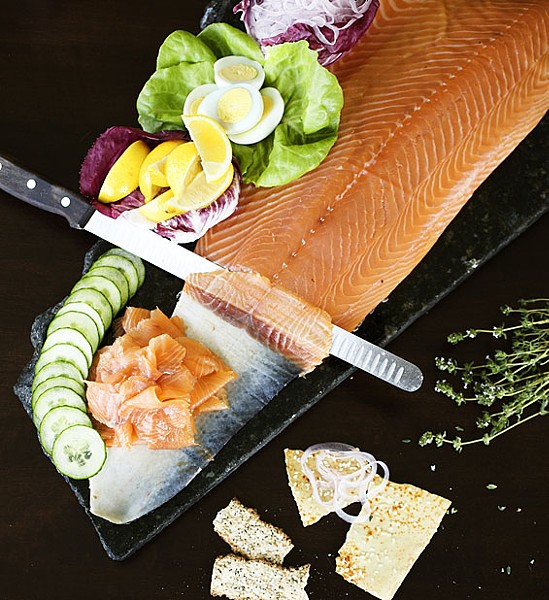 Bite at the Museum: The Missouri History Museum exhibits a trove of lunches and brunches

I take my smoked salmon like I take my whiskey: straight, no chaser. You can have your capers and onion, your everything bagel. In my dream restaurant, the smoked salmon would be treated as prosciutto is, displayed on the plate like a swatch of the finest silk. Your smoked salmon can't withstand such scrutiny? Don't serve it.

At Bixby's Sunday brunch, the smoked salmon shares space on a table with some of its traditional accompaniments; on the lunch menu, it is served as part of a salad niçoise. I urge you, though, to try at least one piece by itself. This is as luscious as salmon can be, its mild flavor tinged with sea and smoke, an experience so pure that for a moment you might think you are eating a piece of salmon sashimi.

Indeed, this is sushi-grade Shetland salmon from Scotland, imported via Bob's Seafood in University City. "We buy [the fish] whole," says Bixby's executive chef Todd Lough, "fillet it, cure it, cold-smoke it, slice it."

This process isn't remarkable in and of itself. That is how you smoke salmon, after all. Consider, though, that Bixby's isn't your typical higher-end restaurant. It is open only 22 hours each week (and never for dinner). You might not know it exists until you visit the Missouri History Museum in Forest Park, where it occupies the southwest corner of the second floor. That Lough and his staff take such pains with their smoked salmon is but one clue that, despite its location and hours, Bixby's is no mere museum café.

Bixby's — named for William K. Bixby, a local philanthropist and two-time president of the Missouri Historical Society — opened a year ago, replacing Meriwether's, which was pleasant enough for a museum restaurant but hardly destination dining. The space is basically unchanged, its dominant design feature the floor-to-ceiling windows overlooking the park. The menu, however, has undergone wholesale revision by Lough, previously the executive chef at Lester Miller's short-lived reinvention of Busch's Grove in Ladue.

In truth the salmon, though outstanding, might not be the best introduction to the fare here. Bixby's theme, Lough explains, is "dining with local influence."

"I frequent the farmers' markets, shake hands with the growers," he adds.

The menu isn't exclusively local, nor does it hit you over the head with a long list of vendors. To me at least, "local influence" comes across not as a dominant theme but as one part of a larger emphasis on seasonality. The menu changes quarterly, and there are specials as specific, limited-season items (say, soft-shell crabs) become available. This certainly isn't unique, but it is always welcome.

What impresses me most is how well Lough's dishes convey a sense of spring: vividly colored and brightly flavored food that — crucially in our recent heat wave — doesn't sit too heavily on the palate or in the stomach. An entrée of a grilled chicken breast with a relish of early-harvest tomatoes, avocado and charred tomatillo might be the best example of this springlike quality: The chicken itself is perfectly seasoned, the flavors of the moist breast meat and its crisp brown skin simply accented with salt and perhaps a dash of citrus. The relish gives it a gentle bite, a little tart, a little acidic, a little sweet. On the side, both a lovely garnish and, if you like, an additional component to the relish, slices of Bermuda onion are fanned across the plate.

A trio of crab cakes, each with the circumference of a half-dollar and roughly an inch and a half high, is notable first for its ratio of meat (a lot) to filler (not much). Good crab cakes don't need much accompaniment. The preparation here looks busy on the plate, but as with the chicken, a relish of black beans and tomatillo and a chipotle-citrus aioli give the crab a clean spring accent (and a little heat) without overwhelming its natural flavor.

(Citrus appears to be the go-to seasoning here. This isn't a complaint. In fact, it's a reminder of how easily a squeeze of lemon or lime or orange can elevate a dish. Here, for example, plain ol' hummus explodes with citrus flavor and, for balance, smoked paprika.)

This is a lunch and brunch restaurant, so truly substantial fare is scarce. The burger is a decent specimen, moderately plump and juicy. It comes topped with white cheddar and charred onion on a brioche roll, with habanero ketchup (more tangy than hot, for those intrigued or frightened by the habanero) on the side.

Bixby's shines brightest with its brunch buffet. The selection isn't as large as at some venues, but the quality of the fare more than makes up for the lack of breadth. Hell, the smoked salmon alone is worth the absence of brunch-buffet clichés like crab claws and cocktail shrimp piled on ice. On my visits, standout dishes included thin slices of grilled beef tenderloin, the interior as red as a rose, paired with a bracing chimichurri sauce. There were excellent vegetable dishes, too: a crisp, lightly sweet salad of watermelon and jicama; asparagus, simply tossed in oil. The gravy for the biscuits and gravy could use a touch more seasoning, though. It tasted too blandly of a blond roux.

If you survey the buffet selection before you take your seat, you might be confused: There is a tray with bacon and sausage, but there is no quivering mass of scrambled eggs, no guy in a toque hunched over a burner, deftly folding your choice of ingredients into an omelet. Smartly, Bixby's brunch includes a short menu of à la carte items, including omelets, that are made to order in the kitchen and included in the price of the buffet. You could make a meal from these items alone: with the eggs Benedict — on my visit the poached egg was paired with sausage, the hollandaise spiked with fresh basil — as your main course and a small freshly made Belgian waffle topped with walnut-maple sauce as dessert.

Service is very good — too good, if anything. (During one lunch visit, four different people asked me whether I was enjoying my meal.) From the host who walks you to your table to your server to Chef Lough, everyone seems to take great and justified pride in the food here. It's enough to make you forget you're inside a museum — and to wish it were open for dinner, too.