Melville Avenue runs less than a half-mile, with only a handful of commercial establishments near its intersection with the Loop. But it still offers a case study in how Chinese food is changing in St. Louis.

At the south end is Wong's Wok, a hole-in-the-wall takeout spot that entices diners with the Americanized dishes that have long defined Midwestern perception of Chinese cuisine. The menu promises General Tso's chicken and Mongolian beef; if you want something more authentic, you have to be in the know.

A couple of doors down is Bing Bing, the Chinese creperie that opened this past July in the old Moya Grill. Bing Bing offers the kind of street food that modern Chinese are eating in 2017 — and it does so unapologetically. There is no beef with broccoli or crab Rangoon on offer here, not that you'd want them even if they were. You'd be too busy filling up on the real deal.

Bing Bing is the latest in a string of like-minded restaurants that have popped up around town, and University City in particular, owned by young, Chinese-American restaurateurs determined to cook their food on their terms. Tai Ke, Cate Zone, Corner 17 — as the list of these bold, talented chefs and business owners grows, so do our options for enjoying the wonderful dishes we didn't know we wanted. 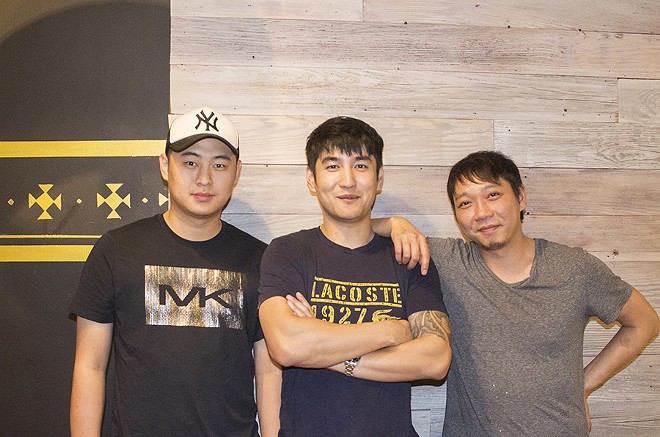 This is not to begrudge the countless American-style Chinese restaurants that came before them (and doesn't take into account the more formal places that have been catering to a mostly Chinese clientele for decades). Opening a restaurant involves great risk, especially for immigrant small business owners looking to support a family. Giving the people what they want often works, and playing by a proven formula minimizes risk.

But if the Wong's Woks of the world cracked open the door in Missouri to Chinese cuisine, the new kids kicked it wide open. Add American diners' increasing sense of adventure and a robust international student population hungry for home and you've got a recipe for the marvelous Bing Bing.

Yong Liu and Yijun Chen, Bing Bing's owners, don't put it quite that way, of course. The way they tell it, they just saw an opportunity and seized it. Though Chen had been eating jianbing all his life, Liu was only introduced to them on a recent trip to Shanghai, and he was instantly enamored. Musing that a jianbing concept would do well in St. Louis, they decided to give it a shot. 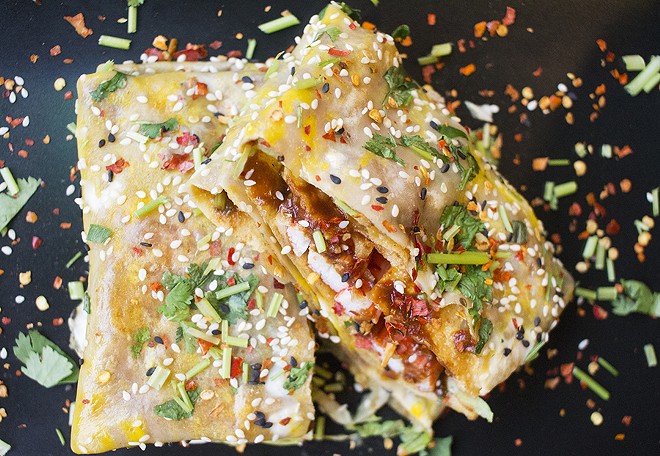 Their timing could not have been better. Over the last few years, jianbing restaurants have been popping up around the U.S., a phenomenon that prompted Eater to declare that they were "taking the country by storm" just two years ago. After eating at Bing Bing, the reasons for that are clear. The two styles of jianbing are not only utterly delicious, they also fit perfectly into the Chipotle model of fast-casual dining. Guests choose between the two styles and customize from a selection of protein options and sauces.

The Shandong style is made from corn, soybean and wheat flour. It looks like an omelet, but has a texture somewhere between a very thin corn tortilla and a crepe. Scrambled egg binds the crepe together, which is cooked on a flattop griddle, filled with accoutrements and folded up like a lovely golden package. The Tianjin, which is made from mung beans, wheat and rice flour, is a bit more robust and nutty.

Both are filled with sesame seeds, cilantro, crispy wontons, magnificently perfumed Chinese pickles and lettuce, then dressed with either a thickened, slightly sweet soy "traditional" sauce or a honey- and mayonnaise-based house sauce. 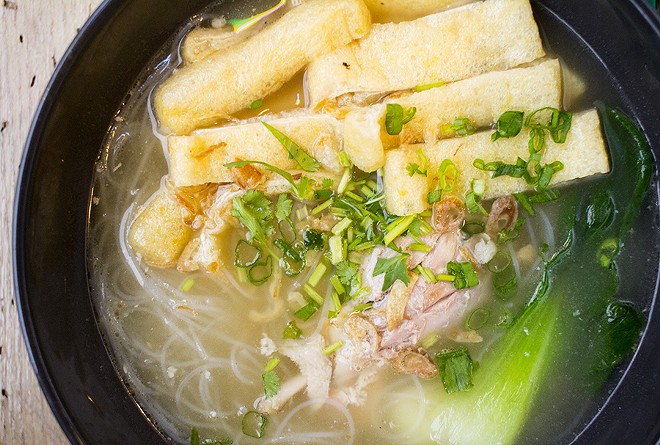 Both hold up well and provide a fairly neutral backdrop to a variety of protein options, including the "golden crispy chicken," which has the satisfaction of a chicken tender with significantly more depth. The chicken is breaded, underneath which a thick layer of skin encircles the meat, adding flavor and texture. It locks in the moisture so the meat is succulent.

Bing Bing's barbecue pork may be a mere filling for the jianbing, but it is good enough to stand on its own. Slices of caramelized meat are kissed with a thin layer of sauce that is both salty and floral. It's a special treat when you get an end piece, which has extra marinade and char.

Taiwanese sausage has a savory pork flavor with just a whisper of sweetness and spice. However, my favorite filling was the pork floss, or rousing, which is basically pork cotton candy. Do the gods really love us this much? 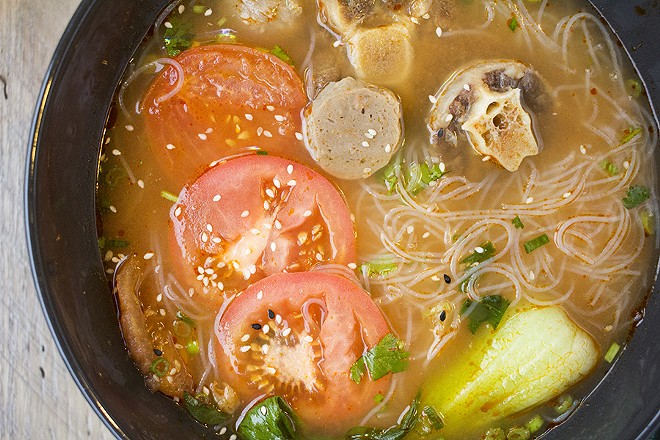 Jianbing are only part of the story at Bing Bing, however. The restaurant serves several other small-plate-style dishes, including the "Green Bowl Beef," which is a crispy lettuce cup filled with lemongrass and chile-spiked sliced beef — a modern twist on the ubiquitous lettuce wraps. This dish reminds us of why places like P.F. Changs made a fortune peddling the dish.

Bing Bing's potstickers are appropriately chewy with a hint of crispness on the exterior and filled with tender pork. As a nice addition, hunks of softened white onions infuse the meat with flavor. The restaurant also offers a variety of kushiage, or meat skewers, including a mild, lightly seasoned lamb version that alone is worth a visit. 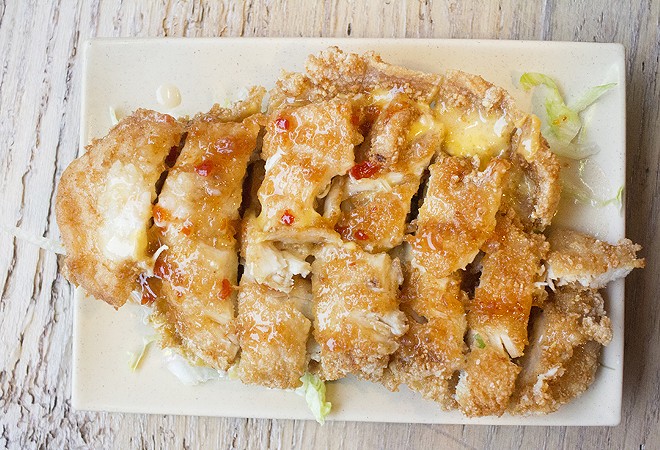 I'm still trying to decide if Bing Bing's "Volcano Chicken" is a joke, albeit a delicious one. The dish, which my friend describes as a deconstructed McChicken, consists of two pieces of breaded chicken breast, with a slice of melted American cheese sandwiched between them, served over shredded iceberg lettuce. I can't help but think that this caricature of American food is a wink at the way Chinese food in the U.S. has been bastardized. Perhaps they were just drunk one night and playing around. Either way, it's decadent fun.

As much as jianbing is Bing Bing's calling card, it would be a shame to leave the restaurant without trying the duck soup, a masterpiece of the form. Chen and Liu marinate the duck for ten days, then make the soup from the intensely flavorful meat. It's subtle, like a consommé, but powerful. Clear glass noodles, hunks of meat and bok choy bob in the broth for a soup that can stand toe to toe with the best dishes at the town's numerous noodle spots. 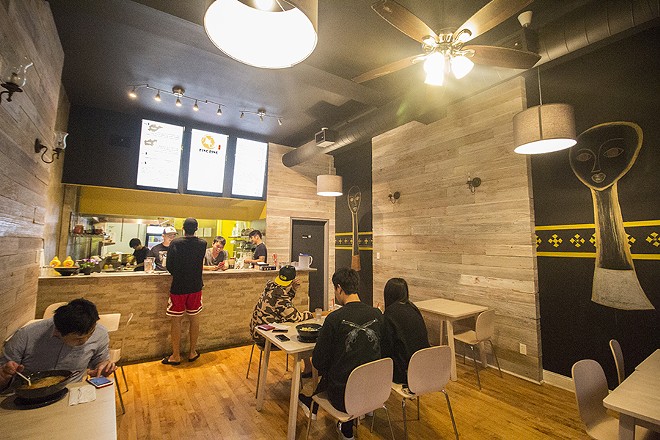 I'd drink that broth like tea, but Chen and Liu have other ideas for beverages. The restaurant serves what they call Aurora, a striking, blue-colored medicinal tea made from the butterfly pea flower. Though relatively tasteless on its own, Chen and Liu combine the tea with an assortment of fruit flavors, such as strawberry or pineapple. The drink is served iced, with a sticker covering the lid, which allows guests to turn the cup upside down and mix the layers of flavors. The result is something akin to a less sweet (and natural) Kool-Aid. For a hot tea option, Bing Bing also serves excellent milk tea, sweetened with honey, out of a container that looks like an inverted light bulb. 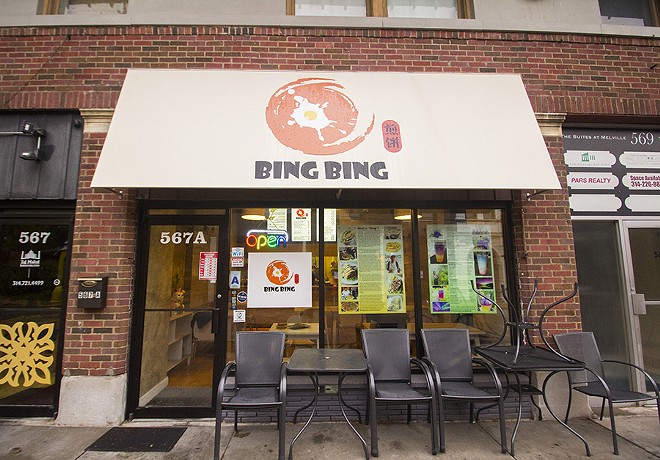 Because the Aurora tea is new and unfamiliar to most St. Louis diners, Chen and Liu have a large sign on the front window that describes it. They also have one for jianbing, assuming that once prospective diners see what's on offer inside their restaurant, they'll be inclined to stop in.

What they don't have on the window is anything touting sweet and sour chicken. And they don't need it. Their authentic Chinese cuisine is good enough to speak for itself.