Trying to pin down Chris Baricevic is a tricky thing. In any given week he may be attending to the day-to-day business of Big Muddy Records, his decade-old label that has been home to Pokey LaFarge, Bob Reuter's Alley Ghost and the Rum Drum Ramblers. He may be rehearsing with one of several affiliated groups in which he serves as a backing musician. Or he may be somewhere on I-55 in his 1994 Toyota station wagon, playing one-man gigs as Kristo, whose lo-fi collection of country-influenced but thoroughly D.I.Y. songs is about to be released on CD.

That collection, Happy Camp, has its roots in Baricevic's home recordings from 2014, and it shows the performer to be scrappily adept at taking American song forms and infusing them with a skewed but sympathetic worldview. Baricevic plays every instrument on Happy Camp and does so passably; you won't be knocked out by his virtuosity, but spirit and soul are audible. He favors the piano as his instrument of choice, a compelling mix of a percussive honky-tonk upright and a mellow, understated Fender Rhodes. 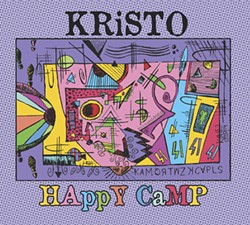 "I have always been a neurotic songwriter," says Baricevic. "I'm always writing songs in my head, whether or not they make it on paper. I spend a lot of time walking, hitch-hiking, washing dishes, painting houses — having my body do one thing but my mind doing another."

Those neuroses come out gently enough on these songs, but Baricevic tells of the turmoil that led to their writing and recording. In 2013 he went through a series of trials hard enough to humble the most devout disciple, the greatest of which was his friend and bandmate Bob Reuter's death on August 3.

"It started with a breakup, then Big Muddy's inventory got flooded in the River Des Peres flood, and then Bob died, and then three weeks after that I got held up by a machine gun in Benton Park," recalls Baricevic.

In the months following, "my head was in another galaxy," he says. "While I was at home trying to heal and talking with some very patient friends, I found these songs to be the best outlet that I had to move through instead of being stagnant, so I could punctuate this period of my life and move on. In some respects I did that. I can't minimize how much help I got from other friends, but the recording process was very therapeutic."

Given that Big Muddy has specialized in local and regional artists that favor country, folk and the blues, Kristo's wide-ranging take on Americana may not be surprising. But talking with Baricevic quickly turns into a guided tour through his diverse listening tastes; he pauses in conversation to flip through LPs that subconsciously influenced the songs on the album. He talks at length about the greatness of Lubbock, Texas, supergroup the Flatlanders and their mix of mysticism and country music. Baricevic says that his heroes — Prince, Dolly Parton, Lee Hazlewood — are "oddball" artists who can "insert themselves in a unique way into an old form."

Those influences are, shall we say, buried in the mix — you might not pull out the references to Acid Mothers Temple on a song like "Maggot," but Baricevic is speaking more to the band's philosophy: The musicians are conduits and the music simply moves through them. Likewise, the chicken-pickin' guitar style on "Witch Doctor" shows his ability at the palm-muting technique, even though you might not pick up the influence of 1960s Jamaican guitarists on the track.

Baricevic recognizes that the somewhat limited palette of these home recordings obscures his ambitions, but he prefers to take a more emotionally and artistically naked approach to his own songs. It's a way of thinking that has carried over into his personal life as well.

"I quit drinking two years ago, and I'm learning how to get in touch with my creative side with sobriety," he says. "Sobriety really helps me understand the term 'spirit.' As a creative person, [alcohol] was often a shortcut to inspiration. That's why you have so many people with creative output but who also have a history of ingesting substances."

If 2013 was a personal and professional moment of reckoning for Baricevic and the Big Muddy family, this set of songs ends one chapter and begins another. He calls the album's release "a three-year movement of trying to get these songs out."

"In the time after Bob's death, I left every band I was in at that point. I just stayed home; I was done," he says. But after eighteen months of stepping away from playing music and hibernating at home, the creative impulse was restored. "The creative spirit in me grew during that time. That was all I had — trying to put the energy inside of me into songs."