It's a lovely Monday afternoon in mid-February, and the patio at the Mud House on Cherokee feels like an unseasonably warm urban oasis. The early spring air (and the coffee) have perked up the al fresco clientele, but Beth Bombara apologizes for feeling slightly zombie-fied. She and her husband/musical partner Kit Hamon are fresh off a long weekend in Kansas City as artists and participants in the Folk Alliance International conference. Well, "fresh" may not be the best term; long nights of hotel-room jam sessions and keynote performances by the likes of Ani DiFranco and Billy Bragg have left the pair a bit depleted. For Bombara, though, the purpose of the trip — to meet like-minded music fans and promote her new LP Map & No Direction — was worth the slog.

"The decision to go do this was related to the hustle," says Bombara. "I'm working hard at this; I should be putting myself out there. I shouldn't be intimidated."

The hustle is nothing new to Bombara, who has dutifully released an album every year or two, many of them funded through crowd-sourced campaigns (this album cycle found her sending Polaroids and haikus to her supporters). After 2015's self-titled record, which was recorded with a five-piece band that pushed the album's sound into more Americana-friendly territory, the husband-and-wife team decided to record Map & No Direction as a duo, albeit with the benefits of a modern studio. A week-long residency in Portland, Oregon, gave them the chance to workshop Bombara's songs in front of a live audience each night and then lay down the basic tracks at Karl Kling's A/D Agency studio. 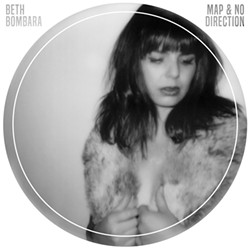 Kling, who is a solo artist as well as a vocalist with RAC (formerly the Remix Artist Collective, once based in nearby Greenville, Illinois), served as co-producer for the album and helped Bombara and Hamon construct the layers to these songs. While many of the tracks stem from a traditional Americana mold, it's the fluctuations — break-beat drums, subtle synths and symphonic swells — that make Map both stylistically divergent and sonically cohesive.

"Working with Karl was great, because he is great at responding to what we're after or what we're putting down already and then saying, 'Hey, try pushing it this direction,'" says Hamon. "It was a very collaborative thing all the way through; there were lots of late nights in the studio."

In press materials Bombara has referenced an affinity for blues music and noted its influence upon her work, but it was never the most convincing foothold into her songs. On Map & No Direction, though, she is able to channel the mood and feeling of blues without many direct nods to the genre itself. One of the more overt signals is a slow-burning cover of Bob Dylan's "Blind Willie McTell," and on this version the apocalyptic visions are backed with the persistent wheeze of Mellotron flutes and a spry backbeat. A similarly raw feeling comes through more directly on a song like "Lonely Few," its spare skeleton of piano and guitar fleshed out with Hamon's most keening violin whorls and slap-kick percussion that seems to emanate from dusty floorboards.

But Bombara's blues hit hardest on the title track, an emotionally bare song from a songwriter who rarely gets overtly personal in her music. "I found myself in a really weird space after the last album came out and we toured on it," she says. "It kind of started creeping into the winter, and I realized that I had slipped into this really dark place, and I wasn't excited about things that I normally would be excited about — which includes writing. I realized that I hadn't written a song in over a year."

"Map & No Direction" was the first song to come after that fallow period and was the beginning of the album that would come to share its name. "I felt that that was my meditation and my way to process what I was thinking and feeling — those feelings of questioning yourself and what you're doing," says Bombara. The song sprung from a series of questions of self-doubt: "'What in the world am I doing and why am I doing this? What's the point?'"

Bombara's soul-baring is partially echoed on photographer Nate Burrell's black-and-white cover photo, which features the singer in heavy mascara, a fur shawl and little else.

"It wasn't difficult," Bombara says of the photo shoot. "It was more fun having people around that I trusted and felt comfortable with to try things and to approach photography as art instead of, 'Oh, we need a headshot.'"

"With some of these songs, feeling emotionally exposed and vulnerable," she says, "it was good having some photos that reflect that a little bit."

Stream the album's title track below: