Because Our Best Chef Had the Courage to Start Over 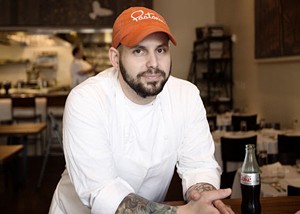 This past June, Gerard Craft invited a group of food writers and friends to Niche for what he'd only say was "coffee and an announcement." Once everyone was assembled, he admitted something that sent a gasp through the room. "We open the restaurants we want to eat in," Craft said. "And sadly, I don't want to eat at Niche."

What followed was a heartfelt explanation for why Craft had decided to close his flagship restaurant on June 11, at the peak of its success. It had nothing to do with money, he explained. Niche had survived leaner times and had even weathered the beating that the financial crises of 2008 inflicted on fine dining restaurants nationwide.

No, this was about something larger and much harder to quantify, though infinitely more important than balance sheets. Craft had simply lost his passion for Niche. It was his firstborn, the place that launched his career, the lauded restaurant that earned him his James Beard Award, the name that was synonymous with his brand — and it had turned from a labor of love into an obligation. What had started out as a fun bistro eleven years ago in Benton Park had become a chore, and the burden that came from feeling like he had to stay at the top took its toll on Craft and his team.

He'd only won that James Beard Award just one year before. He could have kept things going, relying on his executive chefs to take over for him while he rested on his laurels and counted his money. But that's not Craft's style.

Instead, he decided to blow the whole thing up. He's putting the final touches on reinventing the space as a more casual breakfast, lunch and dinner spot, Sardella — a concept that, he says, will better represent where he is not only as a chef, but as a family man too. And doesn't that matter far more than food awards any day?