Bernie Lee has received many suggestions from his Wydown neighbors-turned-diners since opening Akar this past June. Perhaps the one piece of advice he's heard the most, however, is that he should put a steak on the menu. "People in St. Louis need steak and potatoes," he hears. "If you want to be successful, you need to put a steak on the menu."

Digging into Akar's short rib, you realize why Lee has not only resisted these calls — but more or less silenced them. This gorgeous hunk of meat, glistening with a mix of rendered fat and sambal glaze, is a masterpiece. Like a perfectly cooked pot roast, the meat falls away from the bone with barely the tug of your fork, leaving in its wake a pool of the mildly funky sambal jus like a Southeast Asian gravy. You try to soak up as much of this wonderful nectar with the forkful of short rib, but the bit that remains trickles over a few charred carrots and into a fluffy pea mash, its texture somewhere between hummus and whipped potatoes. As if Lee had not already proved the dish's merit, he adorns the plate with half a head of roasted garlic so you can have the soul-stirring joy of dipping the softened cloves into the jus. 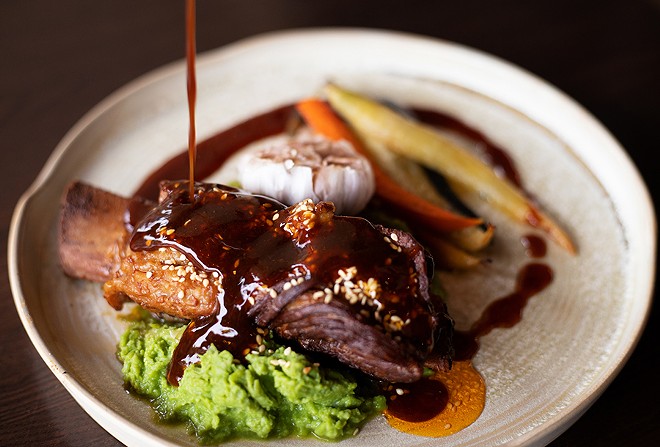 After a few bites of this magnificent dish, you might not even remember the phrase "steak and potatoes," let alone look for it on Akar's menu — doing so would entirely miss the point of this tiny gem of a restaurant. Although Akar is a neighborhood spot by geographical default — its location in Clayton's quaint Wydown district makes it a no-brainer destination for the area's residents — the restaurant is less about catering to clientele and more an exploration of Lee's culinary roots, which extend all the way back to his childhood in Malaysia.

This point is particularly poignant to Lee, who has spent roughly a decade and a half in the restaurant business. For most of those years, he focused on fashioning his establishments for a certain clientele or location. Even at his now-shuttered Washington Avenue restaurant, Hiro Asian Kitchen, where Lee set out to offer traditional Malaysian food based on his family's recipes, he still found himself in a position where what he could do was dictated by customer demand. 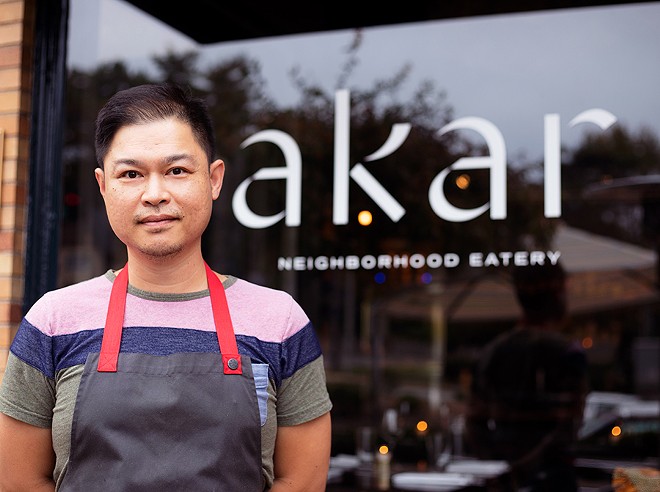 At the massive Hiro, which closed in May, those needs were great. Akar, with its tiny, five-table dining room, restricts him to less space but has resulted in more creative freedom. No longer pressured to fill a dining hall's worth of seats, Lee is able to treat Akar like a dinner party in his own home, which means he is able to do what he wants because he wants to do it.

What Lee wants is to show diners the food he loves to eat. Though the cuisine of his home country plays a prominent role in that vision, the restaurant is more Malaysian-inflected than literal. This is because Lee sees his culinary journey as more than his family's food; it's also the flavors he's discovered through his vast travels around the globe, making Akar a modern version of a fusion restaurant. 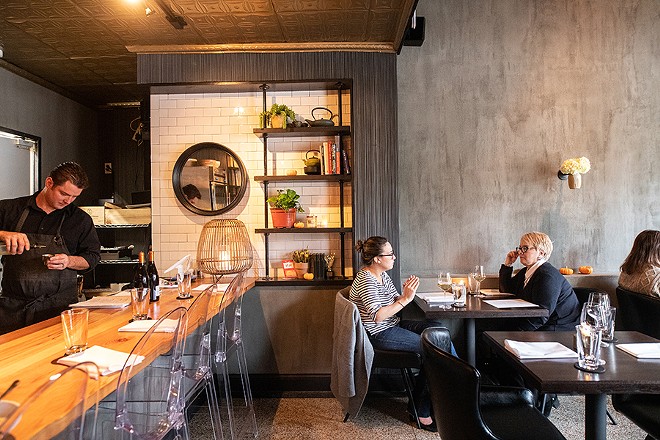 If Lee's inspiration is vast, his stage for displaying it is about as small as it gets in restaurant real estate. Located in the former Anthony's Italian Eats, Akar's dining room seats fourteen people. The patio more than doubles this capacity, but it becomes all but irrelevant between the months of October and April, making the heart of Akar its micro interior. Lee, however, has an eye for design, and he's transformed the space into a stunning room that is oversized in its presence. The restaurant is outfitted in shades of gray — dark on the trim work, light and textured on the walls. A small, wooden bar sits at the back of the room; to the left of that, a white subway-tiled wall features wooden shelves that display glassware and trinkets. Other than this functional decor, the room is minimally adorned save for a lone vase on one wall and three impressive, canvas light fixtures that hang from the tin ceiling. It's a strikingly intimate setting — perhaps too intimate for some of the more well-heeled diners considering you have to walk through the kitchen to use the restroom. For this diner, it adds to the homey charm. 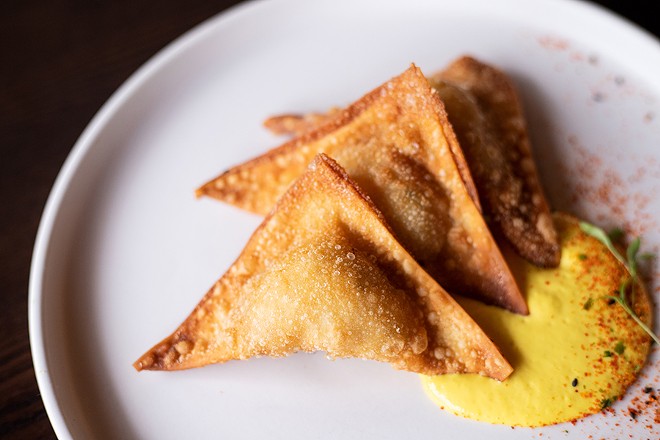 Lee's knack for creating food is as impressive as his talent for design. The lobster wonton, for instance, reinvents the ubiquitous crab rangoon, subbing in lobster meat and a minimal dollop of cream cheese for the filling. More shellfish than cheese, the wontons are accompanied by a mango dipping sauce that brings out the lobster's natural sweetness.

Dumplings, filled with chicken and herbs, are satisfying both in texture and flavor. Outside, the shell is thick and seared golden brown, resulting in a nice light chew. Inside, the chicken acts like a sponge, soaking up the deeply umami soy dipping sauce. Micro cilantro adds an element of licorice flavor that brightens the dish.

The seasonal soup on my visits, puréed cauliflower, was bland on its own and only improved when topped with the optional crabmeat. The soft-shell crab, however, is an outstanding display of the shellfish. Coated in a delicate tempura batter, the crab is a treat itself, its sweetness underscored by a warm corn salad. However, dipped in the accompanying Singapore chile sauce, it's like red pepper chile fireworks going off in the mouth.

Like the short ribs, Lee's entrees are meant to evoke comfort. Overall, they succeed. Mama Lee's Noodles, which are a nod to the noodles his mom cooked to celebrate the Lunar New Year, are thick and slicked with peanut sauce. Veggie meatballs, made from tofu, mushrooms and cashews, had a surprisingly crunchy coating that gave way to a cloud-like interior. Cured egg yolk bottarga gave the dish a subtle funk.

Pumpkin gnocchi, a special on both of my visits, was one of the standout dishes. The small dumplings, tossed in brown butter, were seasoned with autumn spices, giving them a sweet and savory flavor. Mushrooms and artichokes adorned the gnocchi, imparting umami and a bright, lemony note, respectively. Hopefully, this will make a regular appearance throughout the season.

There were two missteps on the entree side of the menu. Halibut, the evening's fish special, was overcooked and dried out. I enjoyed the thoughtful accompaniments — blistered tomatoes, venere rice that popped in the mouth like quinoa and the curry shrimp bouillon broth. A better cooked piece of fish would have made this a success.

I was also disappointed with the Cornish hen. Like the halibut, the hen was overcooked and chewy, and the mushroom stuffing was overly salty. This was mitigated slightly when mixed with the accompanying sticky rice, but overall, it remained over-seasoned. 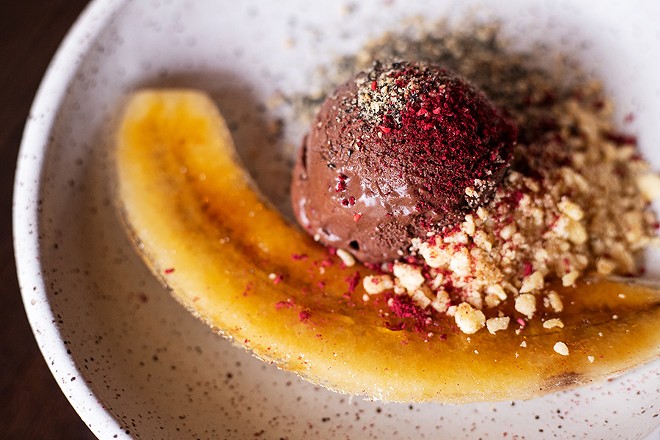 These issues slipped from memory the moment the pumpkin spice bread pudding arrived. Glazed in rich vanilla icing and covered in candied pecans, the dessert is like an autumnal version of a cinnamon roll. I wish I could've ordered a venti. 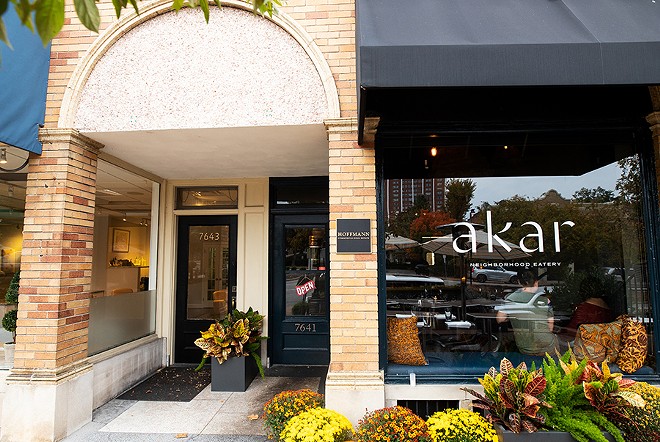 In addition to dinner service, Akar is open for lunch, snacks and Sunday brunch. It has a fun cocktail list, a bar focused on Asian spirits and a robust carryout menu that allows diners to get a taste of Lee's cooking when they can't get a table. What it doesn't have — and will almost certainly never have no matter how often he hears it — is steak and potatoes. Not that anyone misses that once they try Lee's cooking.