If you want to know what it's like to dine at Hofbräuhaus St. Louis-Belleville, save yourself the trip across the river. All you need to do is open a can of Read's German potato salad, dump its entire contents onto a plate with some boiled store-brand hot dogs, and visualize yourself bent over a bierhall table, getting walloped on the ass with a large wooden paddle while an oompah version of Jimmy Buffet's "Margaritaville" plays in the background.

You might think this nightmare scene is an exaggeration, or perhaps taken from a new Bavarian-themed installation of the Hostel series. I assure you it is not. Instead, it's a regular occurrence at the Belleville location of the kitschy German bierhall franchise. Unenthusiastic dirndl-decked waitresses smiling with dead eyes as they get groped by patrons? Check. Busloads of conference-attending corporate bros in from Topeka looking to unload after their day-long accounting seminar? Yep. And of course, what visit to Hofbräuhaus is complete without someone clad in a WWII-era German officer's hat? If you want to encapsulate 2018 in a restaurant, Hofbräuhaus comes shockingly close. 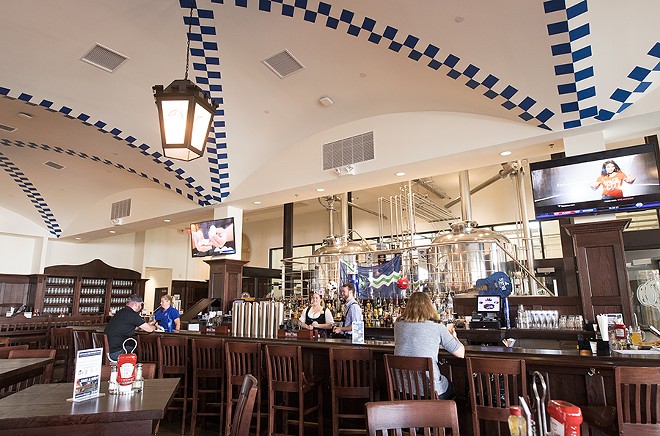 Perhaps I am a bit grumpy, having spent more than an hour and a half waiting for a table at Hofbräuhaus on a Saturday night during Oktoberfest (an admittedly amateur mistake). However long that wait, though, it was nothing compared to the delays that have plagued the project from its inception. When the ceremonial groundbreaking occurred for the St. Louis-Belleville location in 2015, the plan was to open in late 2016, only to have that timeline pushed back again and again until it finally opened to the public this past March.

The restaurant was pitched as just one part of a bigger development, with a conference center and multiple hotels. Yet the land around Hofbräuhaus remains vacant, without another building in sight. The effect is eerie, the giant, gleaming white, castle-like structure rising from a treeless field, as out of place as the monolith in 2001: A Space Odyssey.

The soundstage-like feel is appropriate in that Hofbräuhaus is more theme park than authentic German experience. Though loosely related to the iconic, centuries-old Hofbräuhaus in Munich, the watered-down version that has made its way to the States is part of a franchise with eight locations, including Las Vegas and St. Petersburg, Florida. The look certainly captures the feel of the original: large, communal wooden tables and soaring white arched walls with blue-checkered accents. But while its Bavarian model feels like an organic, traditional German experience that seamlessly blends into the city's culture and architecture, transported to southern Illinois, it feels purely performative. 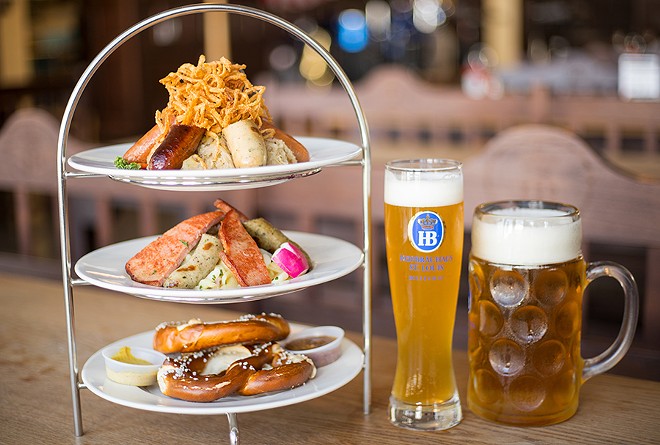 Which is fine if you like the touristy kitsch of, say, Medieval Times or Dixie Stampede. You go to places like this for the spectacle, and on that front, Hofbräuhaus delivers. For every instance of impropriety you see on a beer-fueled Saturday night (if you think I'm making up the butt-smacking antics, Google "Take a Shot Get a Swat"), you'll find twenty examples of good ol' German-American fun: kids doing "the Chicken Dance," multi-generational families dressed in lederhosen and dirndls, parents and children playing cornhole in the adjacent outdoor field, and a full-sized Alphorn bellowing traditional tunes. Are you surprised that everyone yells "Ricola" at the end of the performance?

If you are at Hofbräuhaus for anything other than the spectacle, however, prepare to be dismayed, with food that tastes like it was made for "German night" at a nursing home (apologies to the talented chefs who deliver much better food at some of the area's fine skilled-care centers). In theory, the dishes are authentic. In actuality, they are sad approximations of traditional German cuisine, which, though it gets a bad rap, can be utterly delicious if prepared correctly.

Here they are not, which was immediately apparent when our order of obatzda arrived. Billed as a Bavarian cheese spread consisting of brie, butter and cream cheese, the concoction arrived as two melon-baller scoops of barnyard-scented orange glop, plopped on shredded iceberg lettuce and served with a pretzel. It tastes like a burp after eating super-funky blue cheese.

The pretzel itself is of good quality and appropriately crusted with salt, and thankfully you can order it without the obatzda. As part of the "Jumbo Pretzel Combo," it's served with razor-sharp onion mustard and honey-like sweet mustard. Both are adequate, though my preferred condiment is the beer cheese sauce that can be ordered for an additional charge. Velvety and laced with the sweet tang of beer, it was the second-best thing I ate at Hofbräuhaus.

First place goes to the potato pancakes, two thin fritters akin to hash browns and flecked with black pepper. Crisp on the outside, tender on the inside, these golden beauties have the salty rich satisfaction you want to soak up a day of beer-drinking.

Entrees, however, were one disaster after another. Jägerschnitzel was tough, tasteless and smothered in a substance akin to the dark brown film that forms around the edges of a gravy pan when it sits on a steam table for too long. If the texture was off, the flavor was even more so, overwhelmed by the tinny taste of canned mushrooms. The crispy fried onions and pieces of bacon topping the pork were the best part of the dish. The worst, besides the gravy, was the tasteless spätzle. The dried-out, bland noodles were the plastic texture of Top Ramen before it's reconstituted. It was a slap in the face to the traditional dish.

The breaded pork cutlet, or "Schnitzel Weiner Art," was less offensive because it had fewer components — just fried pork, German potato salad and some cranberries. The pork itself was chewy and lacked salt; the German potato salad tasted canned and slimy.

The "Grillhendl" promised half a roasted chicken stuffed with parsley, beer butter and onion. Instead, it was dried out and overcooked like a day-old rotisserie chicken from the grocery store. The promised "dark beer sauce" was more like packet brown gravy that covered the meat and bled into the mediocre German potato salad.

Sauerbraten was one of the better entrees. The slow-cooked beef pot roast was tender, if not a bit mushy, and its delicate red-wine braising liquid was the best of the entrée sauces I tried at Hofbräuhaus. The root vegetables that accompanied it were softened but still had pleasant crunch. I also enjoyed the "Gebackenes Fischfilet," a large piece of cod cut thick and fried so it broke apart in thick flakes. The fish's breading was well seasoned and not crisp, and the accompanying tartar sauce pleasantly piquant.

A pork-and-beef burger, however, was so overcooked, dried out and generally tasteless, it makes the concession-stand patties you get at the zoo seem like Wagyu. The funny thing is that the bun — not the well-done beef — was the toughest part of the sandwich. I had to saw vigorously with my knife to cut it in half.

The hot dogs, er, "Vienna-style frankfurters," were a better choice. But even they were disappointing. The snappy sausages were one of three meat tubes served on the "Wurstplatte." The other two, which supposedly featured pork and chicken, respectively, tasted like average bratwurst — and oddly identical. 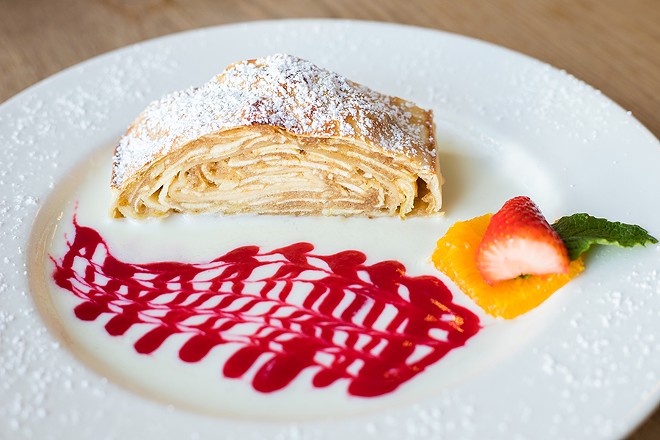 Still, I'll hand it to Hofbräuhaus on one point: They know how to end on a high note. The apple strudel is, hands down, the best thing on the menu. A buttery pastry is filled with softened apples that are shingled with layers of dough. The layered effect is like a beautiful marriage of baklava and the perfect apple pie.

The servers must like it when guests order dessert; such a pleasant endnote is guaranteed to make guests more receptive to the gratuity chat that accompanies every credit-card payment. Apparently, Hofbräuhaus' point-of-sale system was designed in Germany, where tipping is not customary, and so it offers no way to leave a gratuity on your credit card after it's run through the system. Instead, servers are forced into an uncomfortable situation where they have to explain the problem, then ask you to tell them what you would like to tip before they take the payment. It's completely awkward — but I'll give credit where it's due: At least they have one authentically German thing down pat.