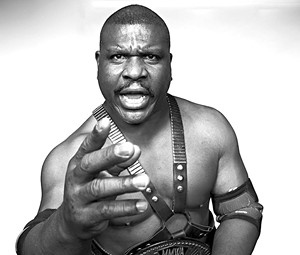 The second Saturday of every month is wrestling night at South Broadway Athletic Club (2301 S. 7th Street, 314-776-4833). Located deep in the bowels of Soulard, the space looks like a cross between a middle school gymnasium, a VFW hall and your great-uncle's den, sparsely decorated with pictures of 40 years' worth of performers. Wrestling here transcends the boundaries of age, class, sex and race. A 90-year-old woman will scream "you suck" in unison with her four-year-old grandson. Hipsters in ironic T-shirts are indistinguishable from the guys the next card table over, who wear the same outfits without the slightest wink. Families of every color share popcorn, nachos and questionably prepared cheeseburgers.

At SBAC Wrestling, the lines between good and evil are as clear as the opening bell; the heels sneer at the audience, while the good guys dole out high fives to ecstatic fans in the front row. Where else in real life is the difference between right and wrong so easy to distinguish? Where else (besides a Trump rally) is screaming obscenities at a total stranger justified and encouraged? But unlike a Trump rally, spewing hate isn't all that brings this diverse crowd together — love for the heroes gets loudly vocalized as well. Sometimes cheering for an injured, knocked-out good guy will help bring him back to life, a meaty Tinkerbell who just can't die.

Some fans scrutinize the complicated plotlines — the storylines are as juicy as the best soap operas — but the nuances tend to get fuzzy, thanks in part to the $2 drafts of Bud Light and the $4 wells, poured by a surly-yet-affable crew of pompadoured bartenders. Most of the crowd ignores the complicated twists and turns of the long-running plots, instead agonizing over major injustices in particular matches. Threats of physical violence are leveled regularly against the hapless refs, who somehow consistently miss illegal moves — "moves" like an unauthorized wrestler jumping into the ring to pummel someone else's opponent with a stop sign and promptly jumping back out again. COME ON REF!!! ARE YOU BLIND?!

Most matches are a treat — amazing aerial stunts and feats of strength by some, cringeworthy displays of physical incompetence by others — but the matches featuring fan favorites are always the most fun to watch. "Gorgeous" Gary Jackson, beloved longtime hero of SBAC, has a series of catchphrases that alone are worth the $8 price of admission: "Rule No. 1: I came here to win. Rule No. 2: I refuse to lose. Rule No. 3: I will cheat if I have to. Rule No. 4" — and here the crowd roars along — "Don't forget the rules!"

Brandon Espinosa is the man everyone loves to hate. With a long beard, belly button ring, swooped hair and a practiced leer, Espinosa knows how to whip the crowd into a vicious frenzy — he has been known to make children cry by yelling "shut up, little girl" into tiny, frightened faces. In other words, he is a master of his art and quite possibly the best wrestler at SBAC.

Pro tip: Call ahead to reserve a table or two; it gets seriously crowded after the bell rings at 8 p.m. The room tends to thin a bit at intermission, but it can stay packed until the "main event," which ends at 10 p.m.