Because We've Got a Movie Screening for Every Mood 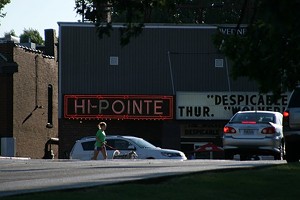 Webster’s defines “film” as “that thing that leads to an argument every date night.” If you just take what Hollywood gives you, you’re not going to be happy. But when St. Louis is your home, you’ve got plenty of options. Let’s say you’re partial to the grisly films of grindhouse auteurs such as David Durston, Marino Girolami and Lucio Fulci. Andy Triefenbach’s Late Nite Grindhouse series has what you want. Once a month Triefenbach brings gory treasures of world cinema to the Moolah Theatre and Lounge (3821 Lindell Boulevard, 314-446-6868) for a bloody weekend of midnight showings. Just this year he’s screened Fulci’s Cat in the Brain, Girolami’s Doctor Butcher M.D. (a.k.a., Zombie Holocaust), and Durston’s I Drink Your Blood. That’s a murderer’s row of murderers. Maybe you’re more partial to the more sensitive aesthetic delights offered by French auteurs. The Robert Classic French Film Festival is a joint production of Cinema St. Louis and the Webster Film Series, and it highlights great films from France. It’s not a nostalgia fest by any means. This year’s festival included early French New Wave gems (Elevator to the Gallows) and more recent fare (Mathiew Kassovitz’s searing 1995 film Hate), presenting a balanced picture of France’s contribution to cinema history. There are similar celebrations throughout the year for nations (the Italian Film Festival takes place in April at Washington University, continents (the African Film Festival normally takes place in April, also at Wash. U), and religions (the long-running St. Louis Jewish Film Festival, which delivers the bulk of its films in June and then shows additional films throughout the year).

But what if you can’t wait ‘til then to see a film? The Webster Film Series (www.webster.edu/film-series) runs year-round, and it shows everything from foreign films (F.W. Murnau’s Nosferatu is on the schedule for October 22) to cult classics through its Strange Brew offshoot (Office Space is October 5). The Webster series also partners with Cinema St. Louis to bring you the St. Louis Filmmakers Showcase and the St. Louis International Film Festival.

And while we’re on the subject of Cinema St. Louis, let’s not forget Qfest, the city’s only LGBTQ film festival. Not even a broken water main could keep Qfest down in 2014, and with its move to the Hi-Pointe Backlot (1002 Hi-Pointe Place, Richmond Heights; 314-833-5307) this year, the future looks both dry and bright.

Now: What are we going to see next? Hint: It looks like a leopard, it smells like Rainer Werner Fassbinder and it’s about the future that is now.
Prev
Next
More Categories