Because We're Fielding the Best Football Team in the Nation 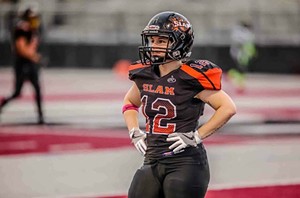 Outlined in their black and orange uniforms, St. Louis' Greatest Show on Turf rode to victory in 2016. The title, once owned by Rams like Kurt Warner and Marshall Faulk, is now rightfully repped by the St. Louis SLAM — an all-female, full-contact team of bruisers who cranked out a series of righteous blowouts en route to a Women's Football Alliance Tier II championship win. The title game pitted the SLAM against the undefeated Tampa Bay Inferno. At halftime, SLAM was up 24-0. The final score was an utterly dominant 38-7.

There are no pros on the SLAM roster. No one gets paid. But through the exhaustion and the pain, there's no denying the results. "It's just one of those sports where anyone can be successful, no matter your shape," says running back Taylor Hay, who punched in the team's first touchdown of the championship. "You find a way."

How do you improve on such a season? Another trip the championship doesn't seem too farfetched. We don't want to jinx it, but — is it too early to start talking dynasty?