Because We Can Turn Adversity Into a Breakthrough 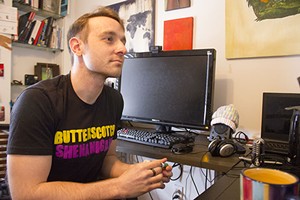 In the beginning, Sam Coster and his brothers created the world of Crashlands to be bright, squishy and weird. The PC and mobile game had to be outlandish, they decided, and funny as hell. But above all else, it needed to be big — so big you could get lost there for hours on end. Because while Coster's mind was busy dreaming up characters and bizarre alien fauna to populate the game, his body was busy trying to kill him.

In October 2013, Coster was diagnosed with non-Hodgkin's lymphoma. There is never a convenient time to find out you might be dying, but Coster had just co-founded a game development studio, Butterscotch Shenanigans, and like many indie developers, the young company was feverishly trying to make a name for itself, with simple, goofy titles that could be replayed endlessly.

Then Coster found himself trapped in a hospital bed. He and his brothers scrapped their next planned project. Instead, Coster wanted to make something ambitious, a game that wouldn't "disappear in the blink of an eye." He wanted a game that would take him away from the disease eating his liver, bones and spleen.

"What I needed," Coster says, "was a huge project."

Two months after his diagnosis, and only one day after his first chemo session, Coster went to work on Crashlands. From his hospital bed, he drew more than 1,000 unique items, aliens, monsters, plants and weapons. His brothers, Seth and Adam, built a sprawling world to contain them.

After two years of development, Crashlands launched in January 2016 to critical acclaim; it remains one of the most popular role-playing games ever released on iOS and Android. The player controls Flux, an intergalactic truck driver who finds herself waylaid on a strange planet after her cargo is stolen by a nefarious alien. In her quest to reclaim her stuff, Flux must build shelter, explore territory and defeat local wildlife to gather resources. "Turn their parts against them!" urges an unhinged narrator in the game's launch trailer. "Sew their skin into armor! Grind their bones into weaponry and turn their babies against their former brethren!"

So yes, Crashlands is super weird, but its cartoony aesthetic and 60-hour storyline has put Butterscotch Shenanigans on the map. And after months of intense treatment, and one scary relapse, Coster says he's been given a clean bill of health.

Butterscotch Shenanigans is angling to build on Crashlands' success. The University City-based company has increased its staff by three, and the team is now working on improving the "Crashlands Creator," which puts the same tools used to build the game into players' hands.

"We've had three years of pretty intense struggle," Coster says. "It's not something you can forget about. You're not given an infinite window of time. You need to chose well how to direct your energy, to where you can accomplish whatever you're trying to do."