Because We Still Buy Books Here 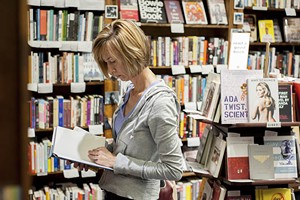 When Charles Dickens first arrived in America he reportedly asked to be taken to see a few prisons; ever the social reformer, he felt he would gain some insight into who we are by seeing how we treated and housed our criminals.

Me, I go to the book store.

More accurately, I go to several. St. Louis is less a city and more a sprawling connection of neighborhoods, each with its own concerns, gossip and squad goals. Our book stores are the limbic system of our Frankenstein body politic, capturing the mood and general emotional health of a particular neighborhood. You'll overhear people talking about their fears (the coming election is a big one), the day-to-day stuff like dead car batteries, the Cardinals and the big issue of our time — what are we going to read next?

Kelly von Plonski (currently reading Emma Cline's The Girls and Robert O'Brien's Mrs. Frisby and the Rats of NIMH) is the owner of Subterranean Books (6275 Delmar Boulevard, University City; 314-862-6100). She suspects this is the case because of the communal nature of how people buy books.

"We hand-sell them," she says. "It's a personal, one-to-one relationship between us and the customer."

Subterranean has been in business in the same location since 2000, and von Plonski says seeing customers who were there at the beginning come in now with children is one of the most rewarding things about the job. She also knows who gets the credit for those life-long relationships.

Subterranean has two full-time employees and two part-timers. Von Plonski believes a good book seller is "part introvert and part extrovert. They have to be a voracious reader, and they have to be curious about what other people are reading."

That curiosity is important. In 2016 people have a plethora of outlets for book talk, book news and book buying, most of them online. But none of them compares to standing in a book store and talking with strangers about what they have in stock. When a customer asks where to find D.H. Lawrence and it opens a store-wide discussion about his best story, you know you're in a great book shop; when everybody nominates a different story and then all involved — including the employee — file off to browse Lawrence's back catalog, you know you've found your people. It's an experience impossible to replicate via text, chat or online review.

That's why social media plays such a small role in von Plonski's professional life. "It's not any more important now than it's ever been," she agrees. "I run Twitter and Facebook, and Gena (Brady, a full-timer) manages our Instagram account, which is mostly for pictures of Teddy." Teddy is Gena's dachshund, and he's in-store several times a week. He has his own shelf of recommended books along with the other employees.

Despite what you may have heard about print dying, business at Subterranean has only grown since 2011, von Plonski says. That was the same year a collective of locally owned bookstores joined forces in the Independent Bookstore Alliance (www.stlindiebook.org), the goal of which was to raise awareness of the integral role book shops play in the life of their communities. Current members include Subterranean, Left Bank Books (399 North Euclid Avenue, 314-367-6731), the Novel Neighbor (7905 Big Bend Boulevard, Webster Groves; 314-738-9384), the Book House (7352 Manchester Road, Maplewood; 314-968-4491), Main Street Books (307 South Main Street, St. Charles; 636-949-0105) and Rose's Bookhouse (8935 Veteran's Memorial Parkway, O'Fallon; 636-272-5857). The group holds irregular meetings and maintains a website with information on upcoming literary events, in addition to curating a best-seller list based on all member stores' sales. (They're all, you have perhaps noticed, located in interesting and well-defined neighborhoods. Imagine that.)

Asked about other group initiatives, von Plonski demurs. "We need someone who has the time to lead us, " she says. "We're all pretty busy with our stores."

So busy, in fact, that she has no definite goals for the coming year. "Not until the kids are in school all day. So I look forward to cleaning the office in 2018."