Because a Woman Is Leading Our Best New Restaurant 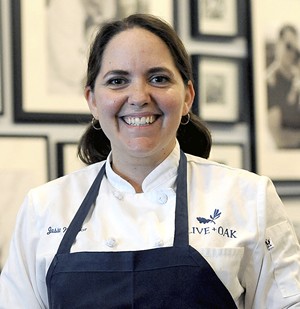 Jesse Mendica, the executive chef at Olive + Oak (102 W. Lockwood Avenue, Webster Groves; 314-736-1370), has read the think pieces, understands the pay disparity issue and has been asked about the subject a million times. And yet she still has the same response when someone wants to talk to her about being a woman in the kitchen: She rolls her eyes.

Mendica is too busy to dwell on much of anything these days. As head of the year's busiest — and most celebrated — kitchen, she has to make sure that people who have waited as much as three months for a reservation leave feeling like it was worth it. She holds up her end of the bargain with aplomb, drawing upon her Annie Gunn's experience to execute a menu of luxurious yet approachable food. It's a far cry from the garde manger station at her first restaurant gig, where she asked, "Would you ever hire a girl?"

Mendica wasn't drawn to the kitchen because of a deep-rooted passion for food. She was simply a teenager who wanted to work where all of her friends were working, and that led her to the old Two Nice Guys in Webster Groves. Mendica noticed that the back of the house was having all the fun — getting dirty, being messy and having a blast while getting their backsides kicked all night long. She wanted to be a part of it, but when she looked around and saw the usual all-male team, she had to wonder if they'd even give her a shot.

"I never looked at it like I had to prove myself more because I am a girl," Mendica insists. "Everyone has to prove themselves. I just wanted to be the best, so I tried hard and worked hard and didn't let stuff get to me. I think we all try hard in the kitchen — at least I hope boys try as hard as girls do."

Mendica enrolled in culinary school at St. Louis Community College-Forest Park's program and worked her way up at JP Fields (the Webster Grove iteration), Frazer's and ultimately Annie Gunn's, where she was promoted all the way to executive sous chef. When Annie Gunn's former general manager Mark Hinkle approached her about a new concept he was opening, she was intrigued.

"When we first talked about Olive + Oak, Mark and I realized that of course we knew good service and that the food was going to be great," says Mendica. "We felt, though, that if we could create a place where people just feel happy, like it's their own place, then that's what it is all about. And that's scary, because there is no formula for that."

Mendica and her team have succeeded beyond anything she could have imagined. Sure, there's the delivery guy who asks when she's going to "get on to having babies, because the clock is ticking." And there have been many times when she's been approached by guests who, having loved the food, requested that she give their compliments to the chef. Old habits (and perceptions) die hard. But she doesn't let that bother her — and she doesn't need to. She's running the kitchen of St. Louis' best new restaurant, and that's nothing to roll your eyes at.