Because Side Project Is One of the Best Places in the U.S. to Enjoy Craft Beer 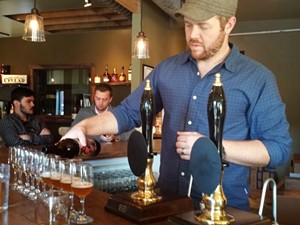 When the James Beard Foundation nominated the Side Project Cellar (7373 Marietta Avenue, Maplewood; 314-224-5211) for its Outstanding Bar Program award earlier this year, owners Karen and Cory King were shocked. The St. Louis beer community, however, saw this one coming.

Since he began brewing his Side Project beers out of Perennial Artisan Ales (8125 Michigan Avenue; 314-631-7300) in 2014, Cory has dazzled the beer world with his sought-after barrel-aged brews. He needed a venue that would not simply serve his beer, but would exist as a means to fully immerse drinkers in the experience. He turned to wife Karen to put together a world-class tasting room.

She delivered. The Cellar team is as serious about the craft of beef drinking as they are about the brewing process. They pay attention to such details as temperature, barware and proper serving for each individual selection. The result of their efforts is the premier place in town — if not the country — to experience beer as an art form.– Cheryl Baehr