Because Renegade STL Tours Give Us New Reasons to Love St. Louis — Every Time 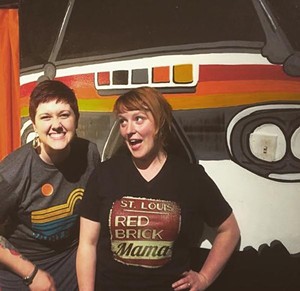 St. Louis history and architecture isn't just the provenance of overpriced textbooks and stuffy lecture halls as long as Renegade STL (renegadestl.com, 314-467-8588) is around. The go-getting women behind this local company take the idea of city tours and turn them upside-down, putting a fresh, laidback and often humorous spin on bus and walking tours throughout St. Louis. You won't get the typical rundown — it's less about T.S. Eliot's boyhood home and more about, say, the red light district that flourished after the city legalized prostitution in 1870. Or the true story of Madame C.J. Walker, the first female African-American millionaire. It's the history you didn't know you were craving, possibly with a few curse words thrown in.

Founder Amanda Clark had been giving private St. Louis tours under the Renegade STL name for a few years when she took on partner Adriana Perrone in 2015 and set out to give public tours. The original "Whole Damn City Tour" laid the groundwork, covering all the neat and nitty-gritty aspects of St. Louis that can be crammed into a two-hour tour. On its first run it sold out two entire buses.

Since then, Renegade STL has grown into a team of young women fascinated by history — a unique selling point in a trade otherwise largely dominated by older men. The tour options have grown as well, with geeky-cool themes such as "The Whole Damn City Tour: Badass Babes," "The Whole Damn City Tour: Disasters and Catastrophes," "Central West End for Nerds" and the "Baseball City" tour.

Whether you're a transplant or a lifetime native, you're bound to learn something new about St. Louis on a Renegade STL tour. Are they traditional? No. Informative? Always. Entertaining? Damn straight.