Because Mvstermind's 'Mali Moolah' Showed St. Louis to the World 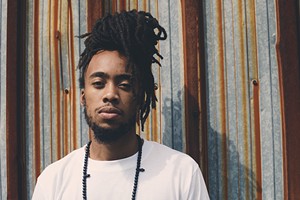 Muhammad "Mvstermind" Austin is hardly the first hip-hop artist to rap about money — talking up your bankroll is part of the game — but on this year's single "Mali Moolah," Mvstermind deployed his characteristic frankness to talk up the struggles of getting paid. As an artist whose mind is usually attuned to a higher calling, he settles on something more than dollar signs: "I knew my worth since birth / I don't need no money."

The song is a stunner on its own, but the accompanying video is a personal and expansive view of the artist and his environment. The clip offers both a birdseye and on-the-street view of St. Louis, but it's not one likely to be used by the regional tourism board. We follow Austin from the city's urban core — the Moolah Theatre on Lindell, a payday loan joint on Jefferson, a Save A Lot parking lot — to grand vistas of a greened-over flood plain and an early-spring reverie on a riverbank. Director Louis Quatorze captures the vastness of these landscapes with quick, immersive cuts and drone-assisted overviews, but Austin stays in the center of the frame, his clear, piercing eyes locked on yours. The video's emotional payoff finds the rapper in his childhood home, now vacant, blown-out and on the verge of collapse.

The local hip-hop community has been keyed into Mvstermind and his MME crew for a few years, but it was no small victory that the "Mali Moolah" video introduced the wider world to Austin's slice of STL when it was broadcast on June 3 on the channel BET Jams. Even if it was only for four minutes, Mvstermind's vision and talent filled TV screens coast to coast.