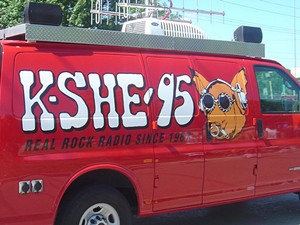 Time has a way of changing everything in subtle, nigh unnoticeable ways. Playgrounds are smaller, your pants are tighter and KSHE-95's Sweetmeat is old enough to need the dreaded annual proctologist visit. The station's format has changed slightly, too, or at least it has from the standpoint of whatever your idea of KSHE's heyday is. You're still going to hear Pink Floyd at some point during the day, and probably a little ELO, but you'll also hear the Struts and Green Day.

But Sunday is for the older crowd. The long-running KSHE Klassics program on 94.7 FM is still going strong, and Sunday from 8 a.m. to noon features cuts by the greats (Todd Rundgren), the legends (Budgie's "Sky High Percentage" is legendary. Fight me) and the "who the hell was that," like Tucky Buzzard and Pousette-Dart Band. And every now and then you'll catch the Outlaws in full flight, honking down the highway through "Breaker-Breaker," the sweetest piece of country-fried rock Hughie Thomasson ever wrote.

You're gonna spend the next couple hours flipping through your own vinyl trying to find Lady in Waiting, but that's not a bad Sunday. If you're lucky, maybe it shows up on the Seventh Day, the Sunday night staple. The format is simple: Seven solid classic records are played straight through back-to-back, with commercial breaks between the A and B sides. Favazz replaced Radio Rich Dalton in March 2015, and he mixes in a few more modern classics than some listeners are comfortable with — Pearl Jam's Vs. is still kinda young, no? — but Rush's ball-busting namesake debut and Head East's Flat as a Pancake chasing Stevie Nicks' The Wild Heart is a pretty good prescription for coming down from the weekend.