Because in St. Louis, Every Day Is Record Store Day 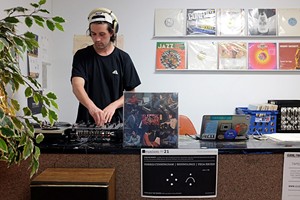 Crate diggers are known to travel absurd distances, hunt down obscure contacts and forever keep their secrets as they pursue flat, black gold. In St. Louis, however, the vinyl is close and ever-ready for browsing, bartering and swapping. You could hit nearly a dozen record outlets by bicycle, assuming your tires are fat enough to carry the load.

The area's flagship shops, Vintage Vinyl (6610 Delmar Boulevard, University City; 314-721-4096) and Euclid Records (19 N. Gore Avenue, Webster Groves; 314-961-8978), have won national recognition, and their stock seems endless. The former is the go-to location for classic blues, soul and hip-hop (and lots more, to be sure); the latter pulls in the latest rock and Americana vinyl releases and reissues, while remaining a jazz-collector's paradise. Music Record Shop (4191 Manchester Avenue, 314-675-8675) in the Grove and Dead Wax (1959 Cherokee Street, 314-913-3692) in the Cherokee District are one-tenth the size, but they still offer a wealth of LPs, new and vintage, and some sweet bargain-bin finds. For the last year, Maplewood has been home to Planet Score (7421 Manchester Road, Maplewood; 314-282-0777), which has strong offerings in '60s-'80s rock and country. And don't even get us started on the Record Exchange (5320 Hampton Avenue, 314-832-2249) in St. Louis Hills. Owner Jean Haffner has spent a lifetime filling every corner of this former library with country, classic rock, '50s pop and rockabilly, jazz and miles of aisles of Elvis. The 45 room upstairs is not for the faint of heart or short on time.

The loss of Apop Records on Cherokee Street in 2014 was a heartbreaker for devotees of the experimental, noise and punk underground. Nothing has replaced it in St. Louis, but the city's newest record store, Endless Planets (2715 Cherokee Street, lower level 5b, 314-884-8045), located just a few blocks east of where Apop stood, caters to a different kind of music obsessive.

Owners Scott Trausch and Jeff Michael opened the bedroom-sized space in the basement of the Cherokee Place Business Incubator in April 2016. They specialize in rare and bewildering international and American dance music: out-of-print post-bop and jazz-fusion titles, African and Brazilian pop and funk, electronic and ambient wax, lots of private or import pressings — pretty much anything and everything that you simply won't find anywhere else in town.

"People know about African funk and what not, but the market changes depending on what people are listening to," Michael says. "Someone like Lazarus Kgagudi, who has electronic elements and the use of Linn drums, might not have been rare before, but now there's interest in these different world rhythms. With the electronic and sampling culture, people are looking for new sounds."

Both Trausch and Michael are DJs, with Trausch spinning regularly at Propaganda and also running a cassette-release label. Endless Planets features a small collection of local experimental and electronic music tapes, and a bin for local releases — if by local you mean impossible to find Gaslight Square jazz albums and Ike Turner Jr.'s electro-funk unicorn Hard Labor. Japanese jazz players paying homage to Miles Davis' electric period? Check. 12" house singles? Check and double check. And though the prices are prohibitive for the novice digger, and the total stock numbers just over a thousand records, the shop has plenty of reasonably priced soul and funk from artists like Herbie Hancock and Stevie Wonder to complete your collection.

"We know that most people can't spend $100 on a record they might not know," admits Michael. "But we want to create a space where people can come in and listen and discover something weird, something interesting, something new."