Because Here, a Farmer Can Become an Artist 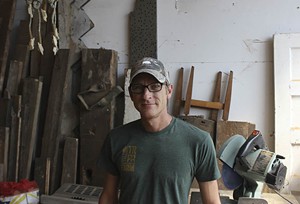 Justin Leszcz sold cars, and that went pretty well. He then quit to grow vegetables in south St. Louis, and everybody loved them. Now at 39, he's a woodworking artist, and his work is all over the city.

Other cities tend to trap people into a single occupation. It costs too much to start over or takes too long to make new connections. People just keep doing whatever it is they're doing.That can certainly happen here, but Leszcz is proof that St. Louis is the perfect launching pad for a moon shot every now and then.

These days, he's working away in a $350-per-month studio in the old Lemp Brewery. The second-floor space is filled with old-growth wood salvaged from St. Louis tear-downs, hand tools and projects that started off as experiments.

"The wood is the biggest thing," he says on a recent tour.

He's currently in love with longleaf pine, a red-hued wood made dense by a unique resin. He found that by slicing it thin, it becomes translucent and glows in the light. So Leszcz took strips, wrapped the edges in copper and soldered them together. The result is like a natural stained-glass window.

"It just looks like fire," he says, holding one of his creations up to the light.

It was that curiosity and enthusiasm that endeared him to some of St. Louis' top tastemakers. Celebrated restaurateurs Gerard Craft, Kevin Nashan and Kevin Willmann were customers. Leszcz says the three "bad-ass chefs" taught him how to focus and build a business. "Those guys, they want to help everyone," he says.

First, it was buying his specialty produce. Later it included encouraging his off-season hobbies, such as ceramics and wood. Following a divorce, Leszcz moved into an apartment and set up a wood shop in a closet, creating wooden spoons and bowls. He started taking commissioned work — lights for Sump Coffee, a wood counter for Lulu's Local Eatery. When Craft closed Niche and no longer needed Leszcz's specialty onions, Leszcz decided he too would make a big jump, to full-time woodworking.

He soon found his network of chefs and restaurateurs overlapped nicely with a growing circle of artisans. In the old brewery, he estimates he's one of about 70 artists and craftspeople. They occasionally host underground shows to raise money and share space for large installations. Leszcz, who has retooled his YellowTree Farms operation as simply YellowTree (www.yellowtreefarm.com), has also begun running a popular Airbnb operation out of his home near the Cherokee district. He displays friends' artwork and has found that guests are eager to buy the pieces. He gets to decorate with original artwork and his friends get to sell their stuff without losing a chunk of the profits to gallery fees.

It's the artists' cycle of life in St. Louis.