Beautiful Losers: Rudo y Cursi is not the kind of sports movie where everyone wins 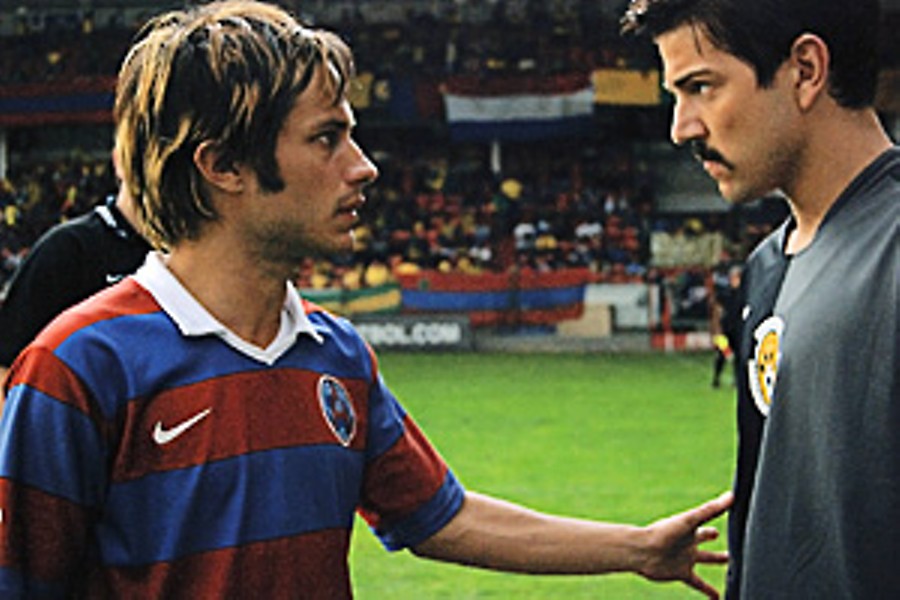 Beautiful Losers: Rudo y Cursi is not the kind of sports movie where everyone wins

Nearly as popular on its home territory as the first Cuarón hit, Rudo y Cursi is a similarly manic, if less psychologically fraught, exercise in male-bonding and fraternal rivalry — rooted in a road trip that the Cuarón brothers took in their twenties. It's also a sports-inspirational story with a distinctively acrid twist. The self-deprecating attitude toward their homeland is apparent from the onset — a montage of rustic, rundown, empty soccer fields, followed by Cursi (Bernal) schlepping bananas at the rustic, rundown plantation, someplace in backwoods Jalisco, where his half-brother, Rudo (Luna), works as the assistant to the assistant foreman.

They're a ripe pair of bumpkins — one needn't understand much Spanish to catch their exaggerated patán cadences. Rudo, whose sobriquet means "tough," is irascible and inarticulate; Cursi, dubbed "corny," is expansive and voluble. Each, however, is a potential soccer star — or so we're told by the good-natured little hustler, Batuta (Argentine comic Guillermo Francella), who, in discovering the brothers and providing the movie's voiceover narration, more or less conducts the action. (The scout also supplies an appropriately macho running gag, showing up in every scene with a different tall, silent, well-endowed young woman in tow.)

Batuta can only take the brothers with him to Mexico City one at a time; thus we can enjoy their miserable digs, mind-blowing exposure to frozen food, locker-room hazing and heady success twice. Happy-go-lucky Cursi may be an unstoppable scoring machine and taciturn Rudo the greatest goalie in Mexican history, but the sports action runs a distant second to character comedy. Larded with hilarious crowd reaction shots, the only actual soccer game in the movie is the climactic matchup between the two brothers; the real competition is which of the two can be more self-destructive. Tone-deaf Cursi dreams of being a pop star; jealous family man Rudo is a compulsive gambler. Together, they make the archetypal doomed movie palooka, bewitched by bimbos and beholden to gangsters.

Rudo y Cursi is as fatalistic as any film noir, but it's played for cartoonish screwball comedy. At once smooth and frantic, filled with cozy clutter and vulgar jive, the movie subsumes its moralizing in frat-house entertainment. What justice can you expect from a world where a man turns on the TV and learns that he's been dumped by his fiancée, or a death threat is followed by the request for an autograph? At the height of their joint triumph, the brothers return home — their half-sister is marrying the local druglord — and compete over who will buy their mother a house on Chololo beach. (Three guesses as to which of them will prevail.)

Despite an undercurrent of violence, Rudo y Cursi eludes the tragic ending that seems to be its destiny. But even if the movie's final shot is a Pacific paradise, the denouement is pretty downbeat — at least by the grotesque standards of the conventional North American sports movie. The rocky road to success is just a dead end (or a big circular drive). Circumstances may vary, but character is unchanging. As Octavio Paz wrote of his countrymen in The Labyrinth of Solitude, "To us a realist is always a pessimist."