Author: The JT LeRoy Story Is a Gossipy Look at the Literary Hoax 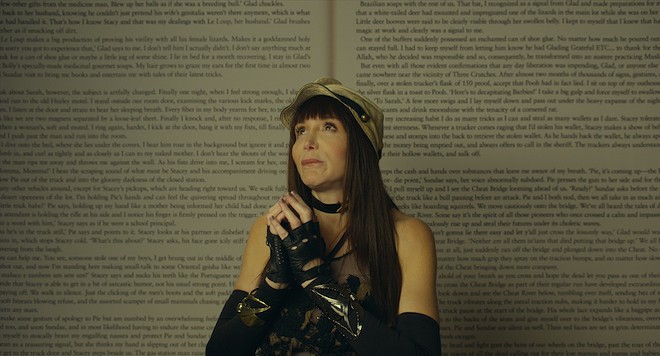 "I heard that Madonna sent you some Kabbalah books." You might think that such a comment, taken from one of many taped phone conversations (more on that later) in the new film Author: The JT LeRoy Story, is about as quintessentially a '90s moment as you can get, but you'd be wrong. The debauched topper comes much later in the film, but I won't spoil it. Let's just say it's exactly what you would hope to hear in a clandestinely taped phone call with Courtney Love.

Love is one of many '90s rock stars and celebrities — Billy Corgan, Winona Ryder, Shirley Manson, Tom Waits — seen in old photos or heard on answering-machine tapes as they briefly pass through the orbit of JT LeRoy, the literary cult sensation/ hoax whose curious history is the subject of Author. The film suits its subject well. Like LeRoy (and his various alter egos), the film is flamboyant, ethically questionable, and impossible to ignore. Both film and subject demand your attention and will do almost anything to get it. They're uncomfortable, irresistible car wrecks.

JT LeRoy — the T stands for Terminator — was a teenaged boy born to a West Virginia truck-stop hooker. He had a history of drug abuse, prostitution and homelessness and was said to be experimenting with gender re-identification. In reality, LeRoy was the creation of Laura Albert, who adopted the personality in telephone calls she made to a San Francisco therapist (also taped — Albert seems to have preserved every phone call she's ever had). Encouraged to write about "his" experiences, Terminator (he didn't have a last name yet) began submitting his stories for publication and soon had an agent and a book deal.

LeRoy's instant celebrity quickly produced a problem: People wanted to see the author. At first, Albert claimed the author was too shy to face the public, but when that failed to satisfy the demand (or when Albert could no longer resist a chance to be in the spotlight) a solution was found. Savannah Knoop, the sister of Albert's boyfriend Geoffrey, donned a blonde wig and sunglasses and appeared as the reclusive author. Albert began to accompany Knoop in the guise of Speedie, his/her English confidante. Soon LeRoy and his sidekick were everywhere — at book signings, at the Cannes Film Festival (where Asia Argento presented her adaptation of LeRoy's second book The Heart is Deceitful Above All Things), and as lyricist and sponsor of Geoffrey Knoop's band (Speedie was the vocalist, of course). Albert and her co-conspirators set a lot of plates spinning; the inevitable crash came about in 2006 when the New York Times became suspicious, eventually getting Mr. Knoop to reveal the entire story. Lawsuits, accusations and bruised emotions followed. And now, the third act: Author is a gimmicky, gossipy compulsively watchable account of the whole story, centered almost solely on Albert and her collection of cassette tapes. Its message is less a mea culpa than an unrepentant cry of "look at me!" (Savannah Knoop appears only briefly; some of the people heard in the recordings were unaware of their existence and have objected to their use in the film.)

Director Jeff Feuerzeig is unrepentant in granting Albert's wish for another fifteen minutes. He allows her to shape the narrative around her own life from her troubled childhood, her rebellious teenage years (like almost everyone who came of age in the late '70s, she goes to great lengths to establish her younthful punk credibility) to her post-LeRoy indignation with those who exposed the hoax, a word she finds offensive. Defensive to the end, she clearly relishes the chance to take the central role that was denied her at the height of LeRoymania, and to reclaim the child-like author from the media doppelganger she created.

Albert's reluctance to concede any error — and Feuerzeig's refusal to press her on any critical issues — push Author close to shaky ethical grounds . Besides the ubiquitous and unaddressed phone tapes (which may have been illegal), the film has the air of an amateur, undirected therapy session. Only late in the movie do we hear Albert's claim that LeRoy sometimes speaks spontaneously through her, although she strongly rejects the notion of multiple personality disorder. More recently, she's described the LeRoy persona as an avatar.

If, as the film almost teasingly suggests, the entire LeRoy episode was more a symptom than an example of literary performance art, what is the idea behind this self-absorbed, not-quite-a-confession? Is it an apology, an explanation or just another wink at the crowd? Albert firmly places herself as the star of the JT LeRoy story, with the viewer taking on the role of one of her fans. With her relentless, bristly self-confidence, she recalls the Peter Cook joke about someone who has learned from their mistakes and can repeat every one of them.