At the Benevolent King, Ben Poremba Returns Triumphantly to the Kitchen, and His Roots

If you want to know the inspiration for the Benevolent King, all you have to do is visualize Ben Poremba in the kitchen rolling briouat, or crispy Moroccan "cigars." Chicken, scented with turmeric and cinnamon and glistening with honey, is packed into a cigar-shaped phyllo wrapper before being fried to the golden hue and crackly texture of late-autumn leaves. It's a painstaking task.

But the scene in question takes place far away from his new Maplewood hotspot. Instead, Poremba wants to take you back to one of his foundational culinary memories, to a time when he was ten years old and in his mother's home kitchen in his native Israel. He often found himself there, helping her as she prepared food. A chef, restaurateur and caterer, Poremba's mom was always cooking. She found in her son a miniature version of herself, with the same talent and passion for food — and by extension, an assistant who could be talked into helping her roll a thousand briouat. Young Ben's technique was impeccable, and, both paying a compliment and predicting the future, she told him as much, observing, "You have the hands for this."

Six restaurants, numerous accolades and a few James Beard award nominations later, no one doubts that Poremba indeed has the hands of a chef. He proved as much the moment the doors opened to his fine-dining flagship, Elaia, and his Mediterranean-inflected bar, Olio, back in 2012. Since then, however, Poremba's journey has led him out of the kitchen and into the role of restaurateur as he has expanded his empire, opening Parigi, Nixta and the now-shuttered Old Standard Fried Chicken.

The Benevolent King isn't just another restaurant in a line of them, though. From a tiny kitchen on a charming block, Poremba is reclaiming his identity as a chef with his most personal concept to date, one that draws its inspiration from the food he grew up eating, the food that made him fall in love with cooking and the food that he feeds his family today.

Of course, this is not the first restaurant that honors his Moroccan-Israeli heritage; bite into Olio's Jersualem bagel covered with labne and za'atar and you'll get an immediate taste of Poremba's childhood cuisine. But the Benevolent King is more earnest than anything he has done in the past, informed by the pure joy of cooking what he loves to cook, with nothing to prove. Poremba has made his name; now he gets to have fun.

And what fun it is; the feeling fills you the moment you walk into the sultry restaurant and bar. Poremba fell in love at first sight with the former Water Street Grill space, and now that he's impressed his style upon the space, the rest of us are sure to be equally smitten. Black paint covers the ceiling and three walls, with the fourth mirrored from floor to ceiling. Candlelight dances in the reflection and across the gilded décor. Small bistro tables, surrounded by black-and-white wicker chairs, evoke a Moroccan beachside cafe, while the shiny tiled floor and bar-tops give off a swanky vintage feel. You half expect to see Humphrey Bogart himself welcoming you inside. It's the sort of place to take your date if you, how should I say it, want the evening to end on a very high note.

But you could also achieve the throes of passion simply by eating what comes to your table. Ripe cherry tomatoes, painstakingly peeled and charred until they are ready to pop, are the star of a simple appetizer. Mint, garlic and thinly sliced miniature hot peppers infuse a dressing of red-wine vinegar and oil that coats the tomatoes with piquant flavor.

Equally simple is a dish of stewed eggplant, paired with roasted red peppers, olive oil, oregano and whole cloves of roasted garlic. Whether spread over freshly baked pita or scooped up with a spoon, this flawless dish is as Mediterranean as the Aegean is azure.

Kalamata tapenade is enlivened with rich anchovy, while a crudité of crisp fennel cuts through the salt and sea with licorice-kissed refreshment. Caviar dip delights with its restraint. Tangy crème fraiche is the star, accented by the fish eggs and garlic — not overtaken by them. 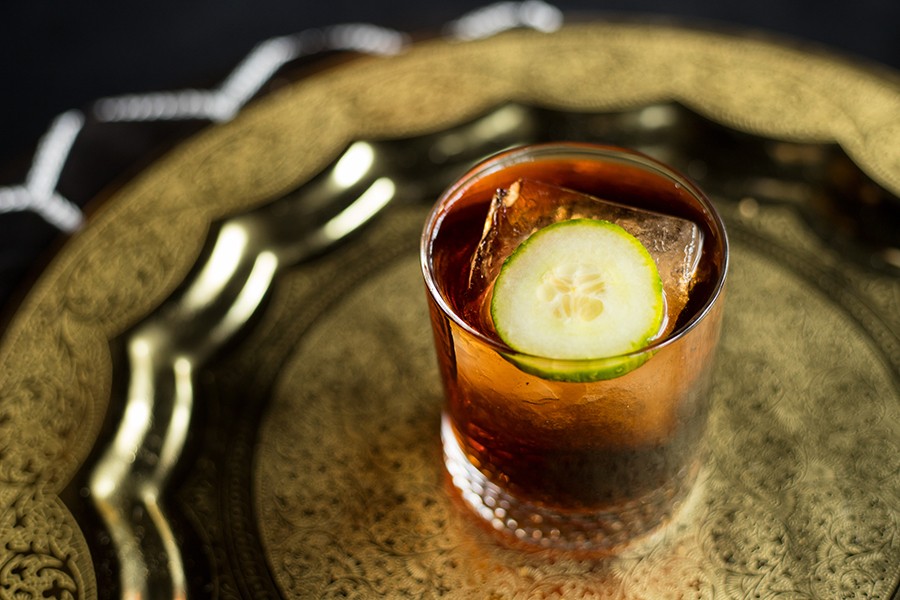 If baba ganoush is considered peak eggplant, then Poremba's "Romanian Eggplant" has broken through to another realm. Fire-roasted, laden with garlic and soaked with crème fraiche, the chunky spread is what you would get if onion dip married baba ganoush and gave birth to the Christ child.

Poremba's falafel, made from split peas, is delicate in both texture and in flavor; warm spices light up spherical fritters that would be satisfying enough on their own. When dipped into harissa laden with chile and garlic, it's ethereal — although perhaps not as ethereal as the fresh farmer's cheese, another of the Benevolent King's "snacks" that, given enough quantity, you could happily turn into an entire meal. Luscious, pungent cheese accented with dill, fennel pollen and dried mint tastes as if cream cheese studied abroad in the Maghreb — and never came back.

Scallops, tender and perfectly cooked, might be the highlight of their platter at a lesser restaurant. Here, they stand on equal footing with leeks that have been cooked to the point of being silken. I'd eat an entire bowl of the vegetables, but here they are but one player in a beautiful symphony of shishitos, chermoula and shellfish. 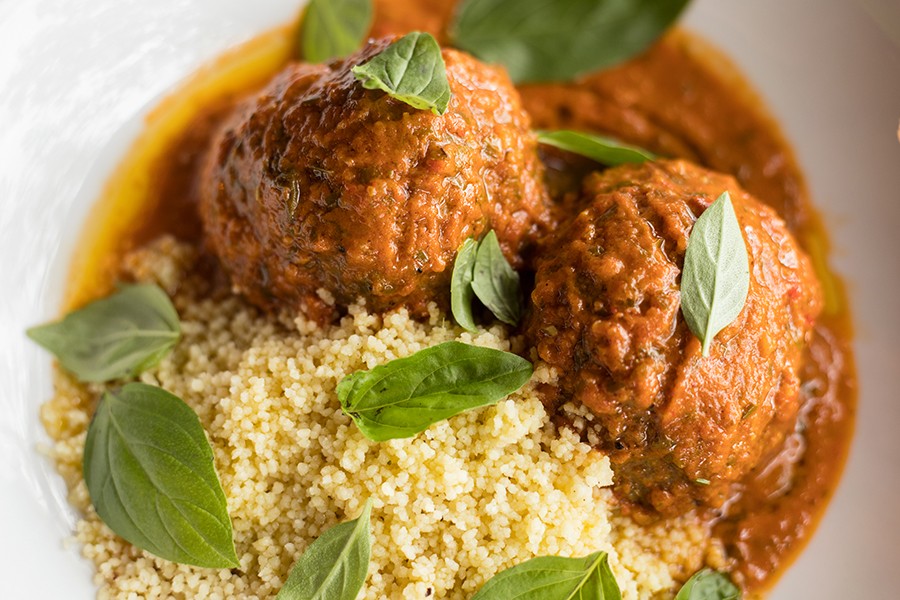 If you have the privilege of vacationing in the Mediterranean, dine al fresco at a beachside restaurant and order the branzino. If you don't, order the fish at the Benevolent King and you will be just as satisfied — at least in terms of your meal. Here, Poremba's deftness lies not so much in what he does but what he doesn't do, namely over-manipulate an already spot-on meal. The European bass is cooked until its tender flesh turns a pearlescent hue, and roasted chicories, lemon and capers accent its succulent meat the way a simple strand of pearls adorns a little black dress. If less is more, then our cup runneth over.

Though all the Benevolent King's dishes are meant to be shared, savvy diners may want to order a second round of the lamb meatballs or risk losing a digit. The fist-sized spheres of mild lamb are so delicate, they feel as if they have been coaxed, not forced, into forming. Fluffy Moroccan couscous and smoked tomato sauce are served alongside these masterpieces; a bite of the balls with a dollop of sauce makes you wonder how the Italians cornered the market on spherical meat.

Though it's easy to fill up on the savory items, it would be a disservice to skimp on dessert. Poremba's mother recently moved from Israel to St. Louis to be closer to her son and his family, and not only does she make an assortment of delightful Moroccan cookies, but the milk custard is a feast for both the palate and the mind. The rich, rosewater-scented cream is covered in halvah fluff, a fibrous, tahini confection akin to a sesame cotton candy. Its sugary sesame flavor dissolves on the tongue; its sweetness lingers like the kiss of a long-lost lover. It's haunting.

With such a strong food component, it might be tempting to qualify the Benevolent King as a restaurant first, bar second. However, with the talented Tony Saputo in charge of the drink list, what's in the glass stands shoulder to shoulder with what's on the plate. His thoughtful list may read esoteric, but beneath the unfamiliar ingredients lie classic flavors.

They won't come cheap, however. Drinks at the Benevolent King will set you back $15 to $18 a pop — steeper than the majority of the establishment's food items. Whether this is worth it depends on how you value good drinks. Personally, I find Saputo's talent on par with some of the city's top chefs; I'm not surprised his drinks run the same price as one of their edible pleasures. Just be prepared that if you want to have more than two, you will either be maxing out your credit card or finishing your night with some Stag down the street at the Crow's Nest.

But as intoxicating as Saputo's cocktails may be, the Benevolent King is, first and foremost, a referendum on Poremba as a chef in his rawest, most authentic form. And the verdict is a resounding one, even though it needn't have taken us all this time to render it — his mom made the call many, many years ago.