Written by Tracy Letts. Directed by Wayne Salomon. Presented by the St. Louis Actors' Studio through April 30 at the Gaslight Theater (358 N. Boyle Ave., stlas.org). Tickets are $30 to $35.

Let's get one thing out of the way. August: Osage County is more than three hours long, and it is about a family so profoundly screwed up, yours may even start to feel palatable in comparison. You should still go see the play at the Gaslight Theater, where the St. Louis Actors' Studio has produced a version so compelling, so immediate, and — perhaps most importantly — so quickly paced, you won't even think of looking at your watch. And besides, who doesn't need a reason to feel better about their family?

In Tracy Letts' acidly funny drama, we meet the Westons. Dad is an alcoholic. Mom pops pills (and also has cancer — of the mouth). Daughter Barbara's marriage is ending; daughter Karen is engaged to a monster; daughter Ivy, the only one who stayed in town, has a nauseating secret. And that doesn't even get into the troubles of the daughters' significant others, of Aunt Mattie Fay and Uncle Charlie, of sad sack cousin Little Charles. When patriarch Beverly goes missing, everyone returns to the familial home to see what they can do to help — and to tackle their mother's increasingly erratic behavior.

When the play was mounted on Broadway in 2007, the Weston's three-story home seemed as huge and grandly ramshackle as a painted lady in Lafayette Square, pre-renovation. But in the Actors' Studio version, the set is confined by the Gaslight Theater's black box, wedged between the West End Grill and a hair salon. What sounds like a weakness actually gives the play the proper scale; when we're stuck at our childhood home, the walls seem to close in on us. We're tripping over each other, elbowing each other, desperately seeking out a little corner where no one can needle us. Patrick Huber's set design manages to carve five distinct tableaux out of a tiny footprint, and its claustrophobia serves the play brilliantly.

That house is located in rural Oklahoma — which is not, as Barbara declares, the Midwest: "Michigan is the Midwest, God knows why. This is the Plains: a state of mind, right, some spiritual affliction, like the blues." But Letts' subject isn't the Plains, or even flyover country in general. Mounted in Taiwan, in Spain, in India, August: Osage County worked just as well reset in those cultures. Letts instead grapples with the way family binds us, the way that, to save ourselves, we sometimes have no choice but to cut ourselves loose — setting off another, equally complicated quest: to find another family, another place where we belong. 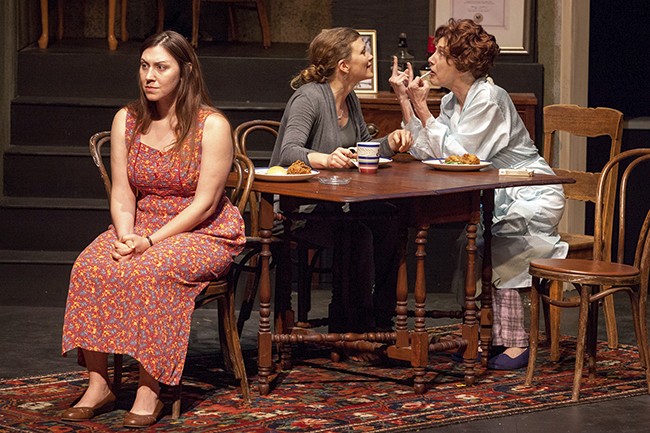 That's a loose enough framework that the play also finds time to skewer the so-called "Greatest Generation" — Letts is a Gen Xer, and he knows the bullshit mythmaking of his parents' generation is just that — and the limits of self-medication. "Something has been said for sobriety," remarks patriarch Beverly Weston, "but very little." Throughout the play each family member turns to his or her drug of choice — alcohol, pills, pot. It seems like a sensible coping mechanism until Letts suddenly pulls back our perspective and reminds us that the lovable alcoholic who greeted us at the play's beginning wrecked his career by being so drunk he soiled himself in public. Substance abuse, he reminds us, isn't cute.

Under the direction of Wayne Salomon, the actors are wonderful. You simply couldn't ask for a better cast, which even includes the company's founder, William Roth, in a supporting role (no surprise, he's great). Every last person feels so true to his or her part that you find yourself wondering, "Where did they get these Oklahomans?" You couldn't single out everyone who deserves praise, but Meghan Baker feels just right as the play's linchpin, Barbara. There's not a false note in her performance. And among the supporting cast, the actress playing Mattie Fay, Kim Furlow, is a revelation. She had the audience laughing out loud until suddenly, near the end, we were in tears.

It's that kind of play. It is, too, that kind of world. It's only funny, and only sad, because it's all true.

Editor's note: In the print version of this review, we mistakenly attributed one of Barbara's lines to Violet; it is Barbara who says the Plains are "a state of mind." We regret the error.