At Handcrafted by Bissinger's, Chef Nick Miller's Food Is As Good as Ever

When the Bissinger's team says that Handcrafted by Bissinger's is a chef-inspired restaurant, they mean it literally: They built the concept around him.

That chef, Nick Miller, came to Bissinger's in 2014 to run the company's then-new event space, the Caramel Room, at its production facility on North Broadway. Miller was fresh off the closure of his beloved restaurant, Harvest, and the move was at first seen as a head-scratcher: Why would a renowned chef, one who had helped to pioneer seasonal, farm-to-table cooking in St. Louis, move to a chocolatier? Sure, Harvest's bread pudding was legendary, but Miller was, first and foremost, a savory chef. How could the full range of his talents be used by a candy company?

As it turned out, though, Bissinger's had plans for the warehouse that were much bigger than chocolate. Though the company needed much of the building's square footage, it didn't need it all, especially the space on the top floor. The owners decided to convert that into a luxury events space, complete with a full-service catering facility, and tapped Miller to head the concept as soon as he announced he was closing Harvest.

With Miller on board, Bissinger's ambitions grew to include an off-site catering company called 23 City Blocks and the events space Lumen. The feedback from catering clients was overwhelmingly positive, with one exception: Everyone lamented how disappointing it was that Miller's cooking could only be enjoyed at special events.

The complaint gave Bissinger's the idea to convert its chocolate shop and wine bar in the Central West End, Bissinger's Handcrafted Chocolatier, into a concept that could showcase Miller's talents. This past June, the company rebranded the space into Handcrafted by Bissinger's, converting it into a neighborhood café by day and wine bar offering small plates at night.

Handcrafted by Bissinger's embraces the European feel of its Maryland Plaza environs. White marble tables and French wicker bistro chairs provide seating on the half of the restaurant featuring the coffee bar and chocolate counter. The other half has a more lounge-like feel, with a French blue sectional and grey velvet chairs and a handful of high-top bar tables. The most striking feature is the accompanying 24-bottle "wine wall," a self-pour system that lets guests help themselves to a comprehensive by-the-glass selection.

Though Miller's food is available at Handcrafted, he does not prepare it on site. Instead, he and his 23 City Blocks Catering team do most of the work at their commissary in the Bissinger's headquarters on North Broadway and deliver it daily to the Central West End café. For the most part, this works, as in the case of Handcrafted's impeccable quiche. Both versions — the mushroom, spinach and leek layered with molten gruyere and the bacon, tomato and cheddar — are made with an egg custard so luxurious it lies somewhere between solid and liquid. The eggs and fillings are baked into a buttery crust that could double as a shortbread cookie. It's a dazzling, best-in-class example of the wonderful dish.

Handcrafted's avocado toast shows why the trendy dish is deserving of the hype. A baguette is soaked in olive oil and dusted with sea salt before being crowned with a melange of diced avocados, tomatoes and feta. Arugula dressed in lemon and olive oil tops this with each layer building on the last — the peppery arugula seasons the salty avocado mixture; the juices from both sop into the bread. It's a delight. 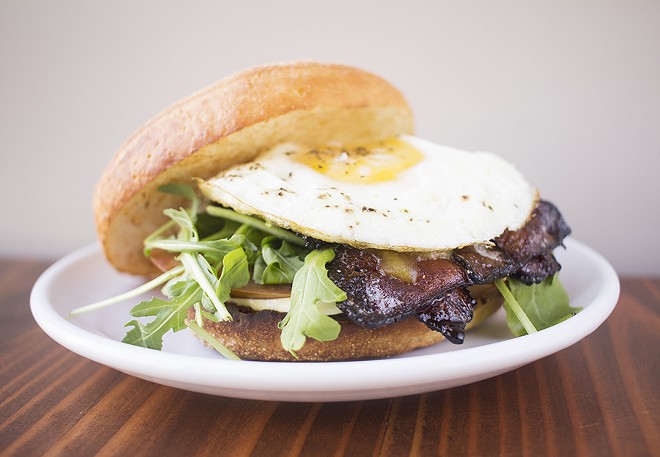 The restaurant's signature breakfast item is its "BELT," a shirred egg sandwich layered with local mozzarella, arugula, tomatoes and herb mayo on a brioche-like bun that has a Hawaiian bread-style sweetness. The sandwich's genius feature is the bacon lattice, a roughly four-by-four-inch square of interwoven bacon that looks like a butcher's arts and crafts project. It's not just for aesthetics, however. Being woven together like this prevents the slide you so often get with bacon sandwiches, so each bite contains the same equal portion of meat. It's brilliant.

The croques monsieur is a respectable version of the classic French sandwich. Country ham and béchamel sauce make up the interior; the outside is griddled with funky comté cheese. Squint your eyes, glance out the window at the Maryland Plaza fountain, and you'll think you are in Paris. 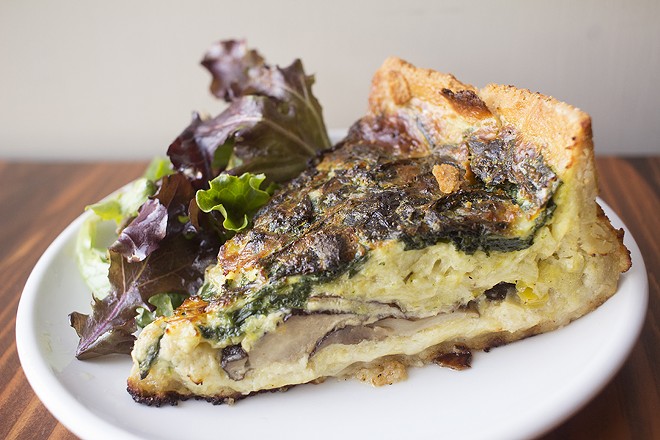 Miller is equally comfortable with good ol' American fare, as evidenced by the brisket sandwich. Slices of woodsmoke-infused tender beef are blanketed in gooey Brie and served on ciabatta. My one complaint is that the brisket was so enjoyable I wished for more; as it came, the portion was a bit sparse. The silver lining was that I had more room to enjoy the restaurant's paper-thin housemade potato chips.

There were a few misses at Handcrafted that I chalk up to poor execution. On one day, the French onion soup — what the restaurant bills as a Miller signature — was unpleasantly thick and so salty as to be unpalatable. The next day, it was thin and under-seasoned. I question whether the inconsistency is the result of it being overreduced at night and then thinned out with water to reconstitute it the next morning, a measure to make up for not having the chef on site. Either way, it was disappointing. 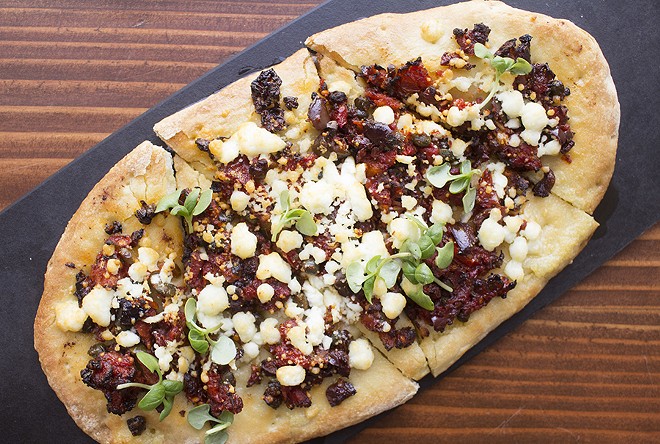 Another disappointment was the tomato flatbread, a dish that looks positively enticing in its star turn as the lead image on the restaurant's website. When it arrived, however, I wondered if it was even the same thing. The menu lists it as containing a sun-dried tomato tapenade and feta cheese; instead, ours was topped with sliced tomatoes and covered in so much mozzarella it looked like your car after a blizzard blows through town.

A few missteps were oversights. A quinoa salad was tasty; it just contained no quinoa. This sort of thing can happen from time to time, but sadly, it happened twice that night when our chicken flatbread also arrived without chicken. 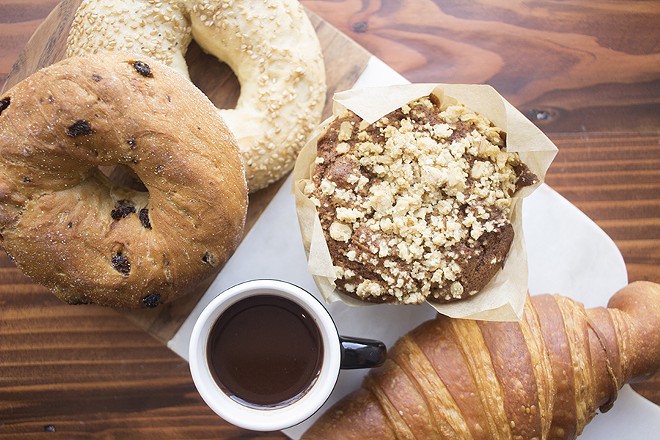 Our server and the manager on duty were mortified at these back-to-back mistakes and, to their credit, brought us a proper salad and took the flatbread off the bill. Their earnest hospitality made what could have been an unpleasant experience into something positive.

However, they could have thrown the flatbread in our face and we still would have walked out happy after eating dessert. Warm, dark chocolate fondue makes a decadent dip for berries, graham crackers and housemade marshmallows, although I was just as content eating it with a spoon like dessert soup. The tart bing cherry and brown butter trifle, too, shows that Handcrafted can do more than just chocolate, while a "Fleur de Sel Caramel Alexander" frozen cocktail may be the best thing served in a glass. 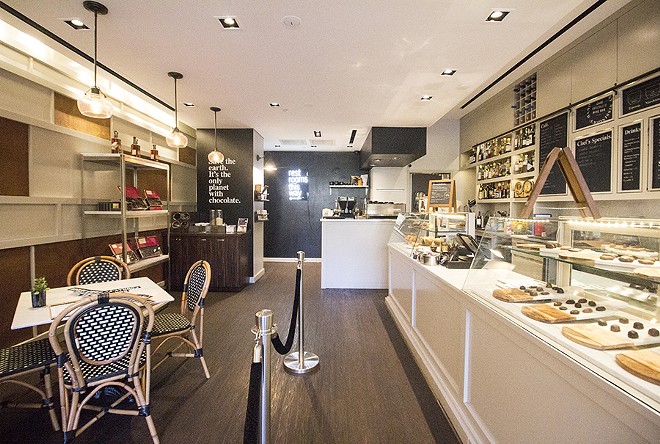 However, if you leave Handcrafted without trying Miller's bread pudding, you've done it all wrong. Miller changes it up from time to time; currently, the velvety, custard-laden pillow is double chocolate infused and topped with peanut butter ice cream. It's so wonderful, your feet might not touch the ground on your way out the door.

The perfection of Miller's bread pudding is well known from his days at Harvest. His former sous chef once told me that if they stopped selling it, there would be riots in the street. And after tasting the perfect dessert — as well as his delightful café fare — I can understand the reason for that angst. Thankfully, his loyal fans never had to make good on that threat. Miller is back, and his food at Handcrafted by Bissinger's is as good as ever.