At Grand Tavern, a Celebrity Chef Trots Out His Greatest Hits

If you know anything about chef David Burke, you know that he has made a career out of his whimsical panache as much as the substance of his cooking. Hailed by the James Beard Foundation, the Culinary Institute of America and even the government of Japan for his culinary prowess, Burke also bears the distinction of having been deemed "Best Culinary Prankster" by Time Out New York.

It's no wonder, then, that when the team behind Angad Arts Hotel was looking to develop its restaurant space, it saw Burke as the perfect person to do it. Its five-year, $66 million renovation of the long-vacant Missouri Theater Building was much more than a way to provide hotel beds to an underserved part of town; it sought to be transformative, blurring the lines between boutique hotel and immersive, sometimes irreverent, art experience. Burke, with his reputation for marrying upscale dining with whimsical, sometimes quirky, touches, fit that ethos.

Since opening last November, the Angad has hit that tone beautifully, garnering national buzz for its impressive art collection, giant, 360-degree immersive video art experience and the fact that it lets guests book color-themed hotel rooms based on their mood. It's a cool, modern space that matches the grandeur of its Grand Center neighborhood, complete with an indoor-outdoor rooftop lounge that makes cocktail hour in St. Louis seem impossibly hip. Standing around its crowded bar on a Friday night and staring out at the Arch, a gentle breeze blowing and a watermelon-and-basil daiquiri in hand, I was overcome by the feeling that the Angad is exactly what St. Louis has been missing. The question that lingers: Is Grand Tavern? 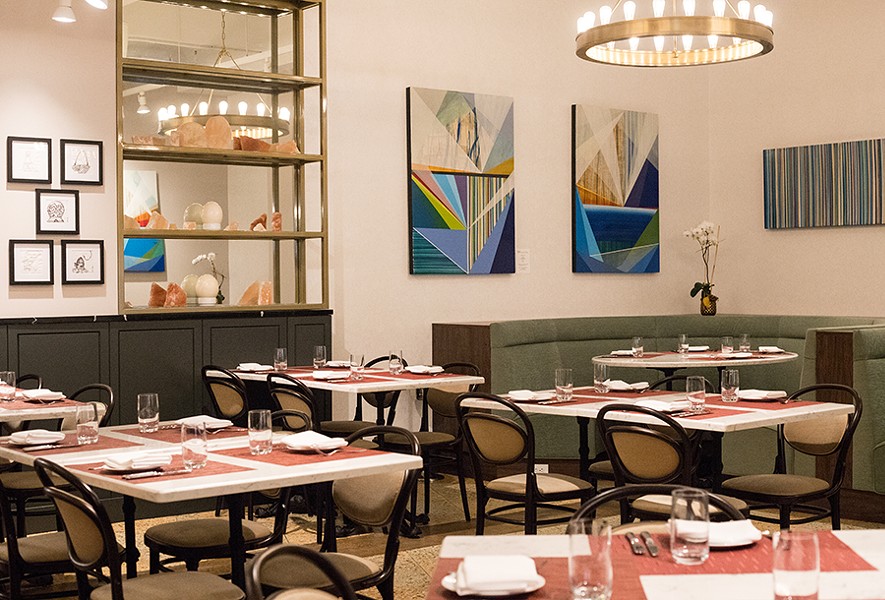 I've been struggling to answer this question since dining here, an experience that was technically good and had elements that made me smile, but that came with a $120/person guest check average and sometimes shaky service in a city whose homegrown restaurant scene is flourishing. Unlike the Angad, it's not clear that Grand Tavern fills a void in the overall dining scene.

The dining scene at Grand Center, however, is another story. It's a part of town that has been largely bereft of quality dining options for quite some time. That's especially shameful since, as the city's theater district, it's one of the few parts of the city some well-heeled county residents visit. Having them eat dinner in Ladue or Chesterfield before heading into the central corridor for an evening's entertainment is a huge waste — for the city and for them.

By offering a celebrity chef's distinct point of view in a cool setting, Grand Tavern is a theater district success. Playing up the building's Art Deco origins, the restaurant's 1930s aesthetic carries through in both its front lounge and back dining room. Both are outfitted with sage green fabric banquettes and white marble tables. In the front lounge, a large dark wooden bar, tan-colored couches and sage green chairs provide seating, while an entire wall is covered in individually framed cocktail napkin doodle artwork. Brass mirrors and chandeliers and geometric abstract artwork finish the look of the space.

Though Grand Tavern is Burke's vision, the day-to-day culinary operations are handled by chef Robert Cantu, a Texas native who spent a large part of his restaurant career working for Fleming's Prime Steakhouse and Ruth's Chris. Under his watch, the kitchen puts out such David Burke signatures as the "Clothesline Bacon," three-quarters of a pound of thick, flawlessly cooked bacon that's hung by clothespins from a wire attached to a wooden frame. On its face, it's a gimmick, but every element adds to the experience: A coarse, peppery coating tingles the tongue, but is tempered by maple glaze. A sprig of rosemary, torched tableside, releases its fragrant perfume, filling the air with an intoxicating aroma. A server will heat your bacon with a torch, rendering its fat onto a pickle spear that lays beneath it. You don't need the pomp and circumstance of the presentation to make the dish enjoyable — which shows the substance beneath Burke's showmanship.

Burke is almost as well known for his "Angry Lobster Dumplings," although they're toned down at Grand Tavern and renamed "Emotional Lobster Dumplings" as a nod to the Angad's mood-matching rooms. Here, the lobster meat is kissed with lemon zest and basil, then tucked into a wonton purse. If the "angry" dumplings listened to Slipknot, these are into Morrissey, their advertised spice barely apparent in a tomato sauce that's still addictively tart. It's punctuated with lemon confit for a floral undertone that accents the lobster's sweetness.

Korean-style "wings and rings" pairs plump, sticky soy-and-gochujang-glazed chicken wings with tender, crispy-breaded calamari rings and tentacles, paper-thin slices of watermelon radishes and shishito peppers. The flavors work individually, but the dish — while stunning in presentation — was difficult to navigate. Chicken, calamari, peppers and radishes are stacked like a kabob, then skewered into a block of wood. To eat it — or, even more difficult, to share it — you have to pull the saucy components off the skewer, ending up with sticky fingers and a mess of ingredients. This is not a first-date dish.

Smoked salmon carpaccio was the standout appetizer on my visits, a mélange of salt, black pepper spice and smoke, each element making its presence known without obscuring the rich flavor of the fish. Though Burke is known for culinary shenanigans, this dish is surprisingly understated, served with small toasts that are a cross between large croutons and crostini, as well as a piquant artichoke and arugula salad dressed in mustard oil that cuts through the fatty salmon. Between the toasted bread, the mustard and the peppery flesh, you'd swear you were eating a pastrami sandwich at a New York deli.

I'm unsure what makes the "St. Louis Salad" anything remotely St. Louis-y. There's no sweet Italian and Provel to speak of — instead Burke pairs burata, prosciutto, chilled shrimp, melon balls, corn and bell peppers for a dish that is refreshing, if not quizzical. My dining companion likened it to the sort of chilled shellfish salads she ate on the West Coast; I thought it seemed like a fancified take on the canned corn and mixed vegetable salad my aunt brings to our family get-togethers — granted, one I eat by the bowlful. The refreshing flavors and snappy texture of each component were a pleasant palate energizer, even if I am still trying to figure out what this dish is all about.

Grand Tavern's entrees may lack the funny names or over-the-top presentations of some of Burke's appetizers, but they deliver in substance. A filet so tender you could use your bread knife to slice through it is paired with barbecue shrimp and creamy grits; the Creole-seasoned butter from the shrimp serves as a rich, herb-flecked gravy that begs to be soaked up with every bite.

A bison short-rib pasta was even more dazzling. Unlike some beef versions, which can be overly fatty, the leaner bison was all meat, but surprisingly tender. A luxurious truffle mousse serves as the sauce, wrapping the bison, wild mushrooms and shell-shaped pasta into earth-scented silk, a flavor that is positively haunting.

Seafood is also well executed, from a simple grilled branzino that is perfectly cooked to the evening's biggest surprise, a lobster-fried rice that features a generous portion of beautifully charred lobster tail served atop XO-sauced fried rice. It was one of my favorite Grand Tavern dishes. 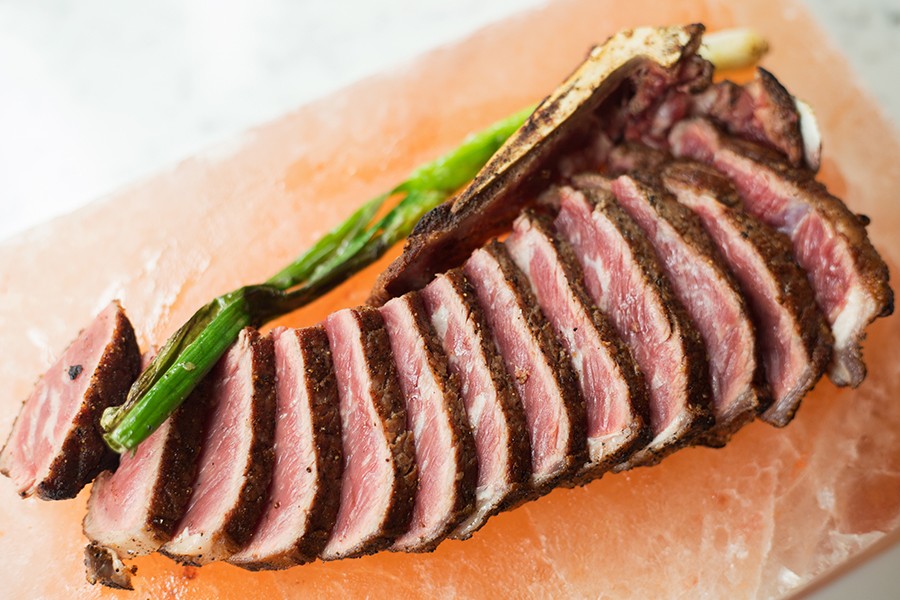 Then again, it's difficult to top Burke's aged steaks, dry aged between 40 and 55 days using his patented Himalayan salt-brick process. The result is meat that is concentrated, nutty and tastes seasoned throughout. The KC sirloin, flawlessly cooked to medium rare, melted on the tongue. Burke needs no gimmicks or special presentation here; the meat itself is the exclamation point. 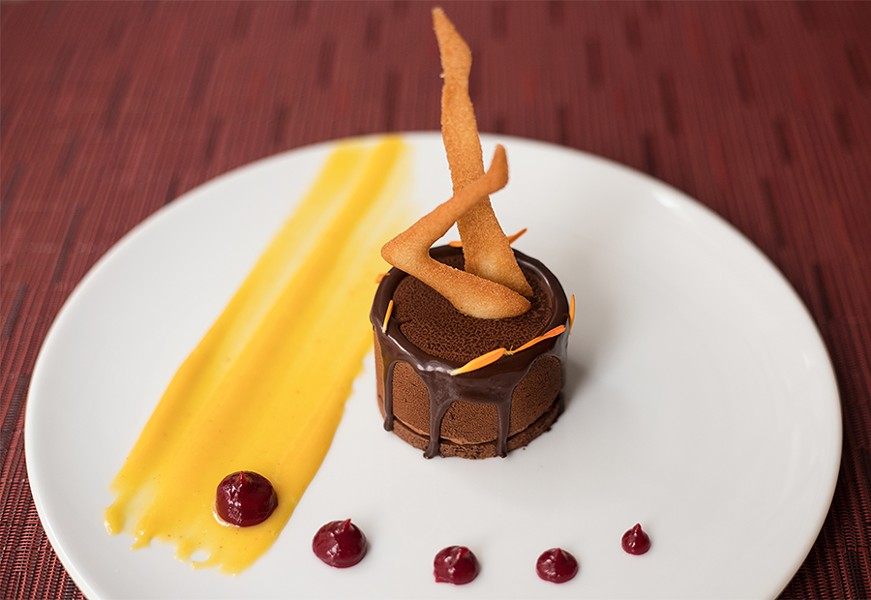 St. Louis' influence on the menu is perhaps felt most strongly on the dark chocolate mousse, served "Radio City Rockette Style." In a nod to the building's past incarnation as the birthplace of the Rockettes, Burke places an edible silhouette of dancer's legs, mid kick, on the mousse, as if they are kicking out of a chocolate pool like a synchronized swimmer in Willy Wonka's chocolate factory. The mousse itself is a fine enough chocolate bomb, but the garnish steals the show.

Burke's other wink to St. Louis comes via the gooey butter doughnuts, yeasty rounds filled with a sweet butter sauce that gushes out when they are bitten. Though tasty enough, they're more literally gooey than an embodiment of the St. Louis favorite. Rather than expanding on the delightful versions you'd get at Park Avenue Coffee or Russell's on Macklind, they read like an out-of-towner's version of the dish. 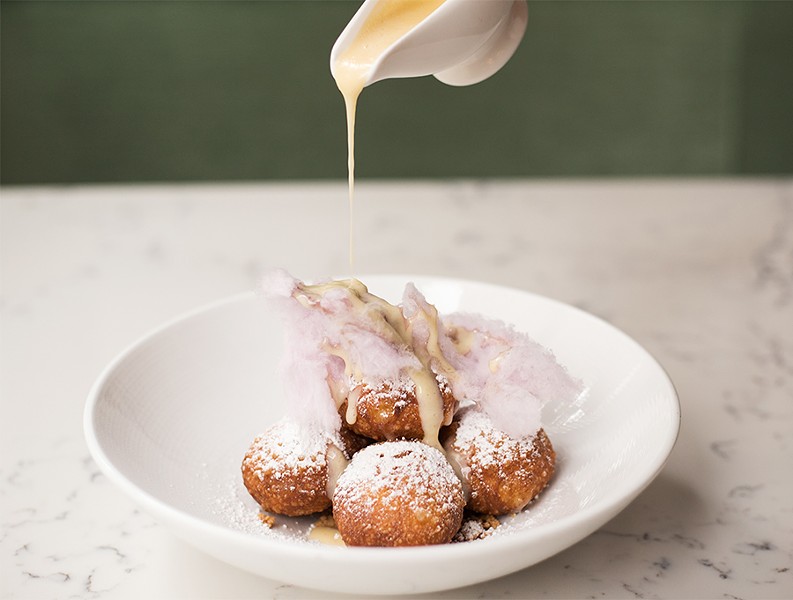 Burke would admit as much. He is adamant that his intention was not to come to town and put together a restaurant filled with his interpretations of St. Louis dishes. Why do that, he asks, when the local experts do it better?

The problem for Grand Tavern is just that — the city is bursting with local chefs who are providing innovative options that go beyond the tried and true playbook of a celebrity chef's longstanding brand. The Angad may have a hip feel, but Grand Tavern seems best suited for the well-to-do theater-goers who may previously have been inclined to dine at a chain steakhouse in the county before heading to Powell Hall. 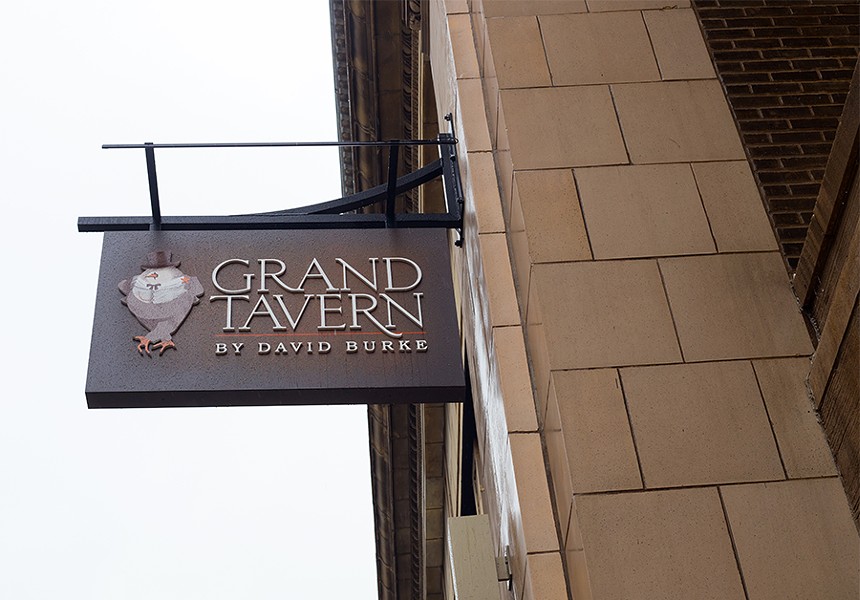 Those diners will want more polished service for the price tag — say, having a waiter who performs proper wine service on your bottle or clears the table in an efficient manner. But they may be inclined to pay for the celebrity cache that Burke brings to the area, and happy with the kitchen's superb execution of a New York chef's greatest hits. For those of us seeking something new, however, the brand-new playbooks being written by local chefs are much more compelling.