At 66, Bill Frisell Is Still Finding His Voice

PHOTO BY MONICA FRISELL "Early on I was concerned with what people would think was cool. The more I play the less I’m concerned about that.”

When Bill Frisell picks up his guitar, adjusts his pedals — they're arrayed like Zen stepping stones at his feet — and tweaks his amp, he's not readying a performance or looking for a sound, exactly. He's finding out where he's at in that moment, on stage or in a studio, and how that moment can really be what he's feeling — or even what he may not know he's feeling. No guitarist in jazz or rock or blues or folk sounds like him, because none are him. That's not really a tautology.

The guitarist — who was born in Baltimore in 1951 and raised in Denver, Colorado — has a discography that reads like a secret relief map to all of the byways, skyways and hidden alleys of American music. In the '80s, his early session work took him to Europe and the ECM label, known for its experimental fusions. Frisell made a name for himself as a brilliant improviser beside the likes of Paul Motian and Jan Garbarek. He worked with Ginger Baker, John Zorn, Julius Hemphill and Paul Bley, driving the most modernist currents in a post-free-jazz world. He worked with Marianne Faithfull and Elvis Costello, explored Brazilian music and classical work, and assembled a dizzying array of his own groups, sometimes exquisitely intimate, sometimes utterly unpredictable in size and range. There's never been a sound or style or genre he couldn't imbue with his signature lyrical timbre, his deeply personal way with a musical phrase. In his hands, the electric guitar really does seem to breathe — and to say something with every breath.

"I'm still trying to find my voice now," Frisell says on the phone from a hotel. "It's something I wasn't even aware of myself. It's something I thought about. All the musicians that have inspired me, one aspect is they all have their own voice. When I hear Sonny Rollins, it can be nobody else. Robert Johnson or Wes Montgomery — they can be no one else. How do you get there? I don't know. I became more aware of it as people told me they recognized it. For me it's constant, slow, step by step. Just tiny steps of reaching toward something I can never quite grasp."

In recent years, Frisell has turned his voice and vision toward composing original film scores and adapting classic scores. His latest album, When You Wish Upon a Star, surprises for how recognizable the selections are (themes from The Godfather, Psycho and To Kill a Mockingbird, for starters) and for how light and loving his touch is with the melodies. Frisell isn't just playing these scores; he's playing his own history with them.

"There's such a wealth of music that's been written for film, it was just an obvious thing to do at some point," he says. "We did a concert at Lincoln Center where the concept was to do film music, so the album grew out of that concept. All the pieces that I chose were personal. They have some pretty deep meaning or deep memory for me. There's the film itself and then there's the music. The story of the film is important, or the atmosphere of where I was when I saw the film for the first time, or what was going on in the country at that time." 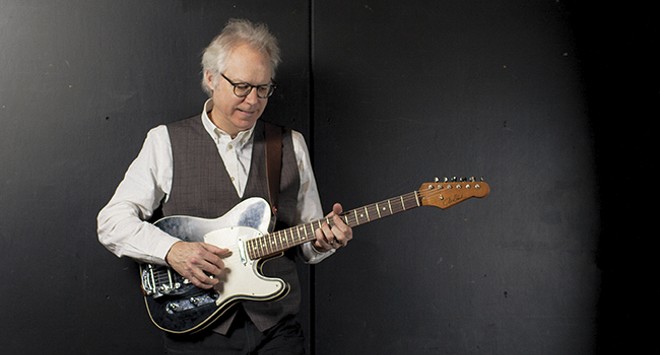 Frisell's style is supremely associative. He can take any tune and find the thread that ties it to his story. "When you're playing that film music, it gives you a lot of emotional ammo to draw from," he says. "To Kill a Mockingbird, that just brings back so much. It came out during the Civil Rights movement. I remember driving with my family to the theatre, and it's almost like I remember more about that than the movie. And then I saw Martin Luther King speak. It really gets deep."

Getting a handle on Frisell's mercurial art, the way he can move effortlessly through the whole history of American music — tackling blues, gospel, folk, country, rock, showtunes and pop, in original compositions or via standards — means getting to know not just his sound but his story. When he plays a song like "Surfer Girl" or "I'm So Lonesome I Could Cry," you're not just hearing a brilliant musician offer up a singular interpretation. You're getting as close to a unique individual and his unique voice as possible. It sounds so simple, but it's utterly mysterious.

"I believe that every single person on the planet has their own voice," he says. "If they are being true to themselves, whether it's their speaking voice or their music: When you hear someone talk, you know it's that person. With music, every person has their own experience and limitations. I'm unable to do a lot of the things I wish I could do. I'm struggling to imply something. In that struggle is where your actual voice is. Early on I was concerned with what people would think was cool. The more I play the less I'm concerned about that."

As a counterpoint to his exquisitely personal approach, Frisell's collaborations have led him deeper into the possibilities of the guitar and the true nature of his own sound. "Every time I play with anybody," he explains, "whether it's someone I've played with thousands of times or a new person, you learn so fast. Even more than listening to a record or practicing. You get with another person, and everything is intensified a thousand percent. If you're open to that, it can't help but feed whatever your own sound is."

As a child of the '50s and '60s, the spirit of rock & roll is central to Frisell's jazz (his 2014 album Guitar In The Space Age!, a selection of British Invasion-era tunes, is one of the best starting points for newcomers to his work), and yet, surprisingly, he's never recorded a tune by the father of rock & roll, Chuck Berry. In a sense, he hasn't had to cover Chuck to pay his respects.

"Some of the very first notes I played on the guitar were 'Johnny B. Goode' or 'Roll Over Beethoven.' I probably heard the Beatles before I heard him, but then I realized they were getting it from him. What his music was at the time, when I was just putting my hands on the guitar, there's no escaping it. Every time I play it's in there somehow. The effect Chuck had on everyone else, it's pretty incredible."

When Frisell returns to St. Louis this weekend — he hasn't performed here since 2011 — he will bring with him bassist Tony Scherr and drummer Kenny Wollesen, two musicians that he's collaborated with off and on for years.

"With those guys, the history is getting very rich," he says. "It's one of the most luxurious situations when I'm with them. It's so free. There's nothing I could play that they wouldn't know. We don't have a set list. We don't have a plan. We just get up there and play. The music just takes over. It starts a conversation and the music leads us wherever we need to go."