Ask a Mexican: Why are Mexicans so damn funny? 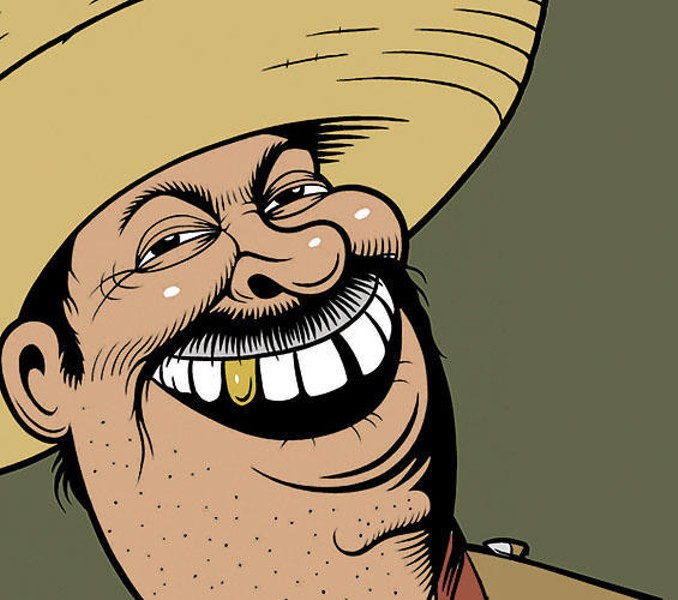 Ask a Mexican: Why are Mexicans so damn funny?

Dear Mexican: I'm so perplexed by my Mexican neighbor. For one, he already has four girls, and I just saw his wife — and looks like she's pregnant again! What really bothers me is that I live in an affordable housing unit. The rent is cheap and based on our income. He has a new Ford F150 truck and his wife drives an older model BMW. Well, what bugs the hell out of me is that he digs in the apartment complex trashcans every freakin' day. I live in a large complex where there are about six trash bins. Every morning, before he takes his girls to school, he digs in all of them for recyclables.

I wonder if I'm just jealous, because he must make like $300 a week on all the stuff he recycles, but it really bugs me. If he's so freakin' poor and digging in the trash for an occupation, why must he still continue to bring more children into the world? The city I live in has a No Scavenging Law. I really want to report him, but I feel guilty. I feel like I should let him keep digging in the trash, since he has a family to feed. Also, I guess I'm nosey too, 'cause I wonder if they work? I don't think they do, and I wonder if they're abusing welfare? And I wonder how many freakin' girls he's going to have before he gives up his dream on having a son.

OK, well, I hope you can help me with this issue. Am I evil? Should I care less? Help.
Pocha Cabrona in Chino

Dear Pocha: You're not evil, chula: just pendeja. You — an assimilated Mexican-American — still have to live in affordable housing? So much for breaking the stereotypes of Mexicans as lazy peons. Meanwhile, that wab that bugs you so much is hustling, digging through garbage for a couple of extra bucks — it's obviously working out good, since he's living a better life than your floja ass. Who cares if he wants to have more kids? That's his decision, not yours. Maybe you'd be better off in life if you picked through trash — but I'm sure you think that's beneath you. Meanwhile, you're wondering if your Mexican neighbor is on welfare when YOU are on the government queso. My immigrant parents, who always scrimped and saved and bought massive trucks and SUVs because no honorable hombre should ever leave home without one, never took a dime — that is beneath them, since that's such an American thing to do. If ever there were a case for Mexicans to not allow their children to assimilate, you'd be the poster niña, pendeja.

Dear Mexican: I got asked to participate in a Internet radio show where I, as an alleged (mostly by me) Mexican comedian, will be asked questions like, "Why are Mexicans so funny?" Since I'm as Mexican as a Del Taco stand, I defer to you for some insight and wisdom that I can share to the show's four audience members.
Tommy Milagro

Dear Wab: Have you talked to our pocho cousins? A veritable Comstock lode of material for ridicule there!

PREORDER TACO USA! Gentle cabrones: My much-promised Taco USA: How Mexican Food Conquered America, will finally hit bookstores April 10, but that doesn't mean you can't already order it (yes, grammar snobs: I just used a double-negative, but Mexican Spanish loves double-negatives the way we do cute second cousins). Place your order with your favorite local bookstore, your finer online retailers, your craftier piratas, but place it: my libro editor has already promised to deport me from the publishing industry if we don't sell enough copies! And stay tuned for book signing info!